A Mother’s Dying Message: What Matters Most Is the Love We Give
By Cameron Connelly 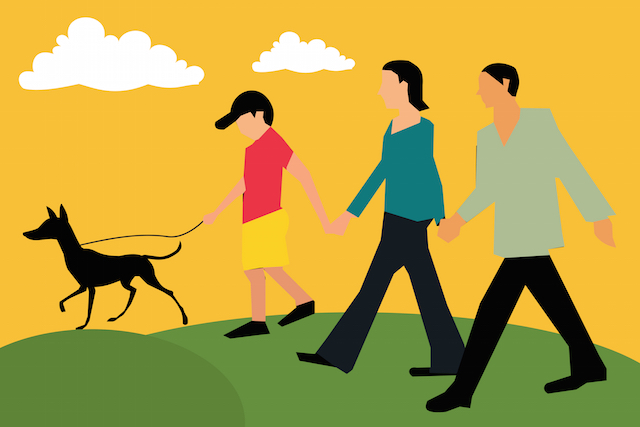 “Before someone’s tomorrow has been taken away, cherish those you love, appreciate them today.” ~Michelle C. Ustaszeski

Landlines, you remember them, phones that need to be plugged in the wall. Well, my wife and I still have one. Our parents have committed the telephone number to memory, they recognize the announcement, and they feel comfortable hearing the beep and leaving a message on the machine.

It’s a simple accommodation, and we appreciate when they call.

It was 2:00am, and the house phone was ringing downstairs. My wife mumbled into her pillow, “Hewssa culn thz lay?” I understood her, but I didn’t reply. She lifted her head, cleared her throat, and repeated, “Who’s calling this late?”

I still didn’t respond. I wasn’t ignoring her. I was anxiously waiting until after the beep to hear if someone was leaving a message. And yes, someone was talking, but the words were indiscernible. I went down to replay the message.

“Hey guys, sorry so late, but…a…hope I didn’t wake the kids…uhh…well…maybe you should…your mother…just…just call me back when you get this.”

It was my dad, and I knew what he was trying to say. My mother was sick, and she had been for a long time. Family gathering after family gathering had come and gone, and she always ended the celebrations with, “I’m so happy to see everyone. I’m truly thankful. I hope I’ll still be here for the next holiday.”

In response, all five of us children and our spouses would chime in, “Oh, Mom. You always say that. Stop being silly.” Truth is, she wasn’t kidding. She knew her body, and lately the cancer was fighting back stronger than ever.

My wife and I often talked about what it would be like when the call came in the middle of the night, or anytime for that matter. We were trying to prepare ourselves for the inevitable. Even still, reality has a way of throwing a curveball, rarely mirroring speculation.

You never really know how you’ll react, especially when something hits so close to home, to the heart.

I remember feeling like someone had punched me in the gut. My legs got weak, and I melted to the floor. I just sat there in the dining room, leaned up against the buffet table in the dark. I have no clue for how long, but enough time had passed that my wife had gotten dressed, come downstairs, and was standing before me, holding a pair of pants and a shirt in her hands.

“Alright, get up, put on your clothes, grab your shoes. I’ll drive.” How my wife always knows what’s going on and what to do is beyond me. And by the way, she’d also woken our kids and gotten them ready as well.

She further instructed, “Call your father from the car and tell him we’re on our way.” Wow!  Now, I know what Beyoncé means when she sings about women running the world.

After an hour drive, pulling up to my parents’ house was like arriving for New Year’s Eve. The house was all lit, and there were cars in the driveway and out on the road.

The front door was unlocked and upon opening, we were smacked in the face with the aroma of coffee, very strong coffee to be precise. There were nieces and nephews downstairs, some still in pajamas, chasing my parents’ Bichon Frise. All the adults were gathered upstairs.

My mom was in the smallest bedroom in the house, just beyond the top of the staircase. And there was a specific reason. This room was made to resemble a hospital setting. It had a bed that cranked and adjusted to multiple positions, a couple monitors, and a bunch of other essentials that made me angry at the world.

I hated her being in that room so often, and so did she.

She loved her beautiful master bedroom, though. It had a king sized bed with the coolest headboard. Shelves were built in, lighted, and she lined them with pictures of the family. And there was a comfy reading chair in the corner.

But being in the “hospital room” was not only necessary, it was psychological, especially when she felt really sick. She never wanted to associate her life before cancer with her life after getting “the c word.” So feeling horrible in her awesome bedroom was out of the question.

Anyway, the alternative bedroom barely had enough space to fit my dad, my three brothers and one sister. Spouses lined the hallway.

After slowly climbing the stairs, my wife gave me a nudge through the in-laws towards an open door. “Get in there Hun. Don’t worry about me. I’m gonna check on the cousins before they kill the dog.”

Inside, a dim yellow light hardly revealed faces, and it smelled like an old corner drugstore and potpourri. My mom was sitting upright in bed and saw me standing there. She said, “Well hello. It’s my handsome son.”

While she quickly had to explain to my brothers that they were equally as handsome, I made the rounds. I gave my sister a kiss on the cheek, shook my brothers’ hands, and gave my father a strong hug.

Of all the siblings, I live the furthest away from Mom and Dad’s house. So everyone had already taken the opportunity to talk with Mom directly. I was the last one, always forgotten. Haha! That’s not true of course. I just owned the stereotypical insecurity of being the middle child.

As fate would have it, I was born on the fringe of two age groups. I was always too young to hang out with my older brothers, and my little brother and sister were less than a year apart. So they were practically twins and had no regard for a third wheel…well…not all the time. I like to exaggerate for sympathy.

Mom often told me that being the middle meant sometimes feeling left out, but that it developed character and independence. Then later she would remark that I was the most emotional and needy, because I was born in the middle. I think she customized her theories about the order of birth based on the situation at hand.

To continue, someone had brought a chair up from downstairs and placed it at the side of the bed. I recognized it immediately as being from the dinner table, one of the very same seats from growing up. Before I sat, I leaned down and gave Mom a hug and kiss. I then took my place, looked at her and joked, “Can I have another helping of mashed potatoes, Ma?”

There was complete silence, nothing, crickets.

The mood was much more somber, or rather serious, than I was willing to accept. My mom let me off the hook though. She rolled her eyes, smiled, and shook her head all at the same time, saying, “You did always love my mashed potatoes.” She reached for my hand, and I met her halfway.

“Honey, I’m on my fifth time saying this, so excuse me if it sounds a little rehearsed. Oh boy, why did I have so many kids?” Everyone laughed that time. “Listen. I’m proud of you, and how you’ve grown as a man and a father and a husband, and…” I stopped her midstream, literally said, “Stop!”

I’ve always been impulsive and unpredictable with my words. My sister says I lack a filter. But this time, even I didn’t know what I was going to say. Was I about to ruin the last moments of my mom’s life?

There was a hush over the room and after a nervous hesitation, I began, “Mom, this can’t be the end. There are so many things you didn’t do.”

Voice quivering, I rambled on, “Remember, you said you always wanted to write, but you and Dad had to work to support us, and there was never time. Well guess what, I started writing, and you could too. I thought we’d share stories. And how about that trip to Italy you always dreamed of…eating your favorite spicy food…and the Sistine Chapel…?”

I felt her grip on my hand. Still I babbled on, “You didn’t get a chance to live your life. There’s so much you didn’t accomplish.” At that moment, she squeezed the blood from my hand, then relaxed her hold. I knew to be silent. She told my brothers and sister to move in closer. She had something that needed to be heard, and she wanted to see everyone’s faces.

“Listen. When I hear the word “accomplish,” I do think of my life, but not the things I haven’t done. Look around this room. Look at what I’ve created. I have no disappointment, no regret. Sure I would have enjoyed writing and traveling, but they certainly wouldn’t have defined who I am. I picked the greatest partner and took on the hardest job in the world.”

She took a deep breath and resumed, “Just witnessing how wonderfully you’ve all turned out, the bonds you’ve built, and the love you share with your own families, I am filled with a pride that only a mother could know. So please, please, don’t look back on me as having a life unfulfilled. Right here, in front of me, is the greatest accomplishment of all.”

There wasn’t a dry eye in the room. You could even hear sniffling coming from the hallway. My wife, who had been sitting on the top step, later told me, “Your mom was right. You are sensitive. And I love you for it.” The rest of the night was filled with stories and laughs and tears. And with the rising of the sun, Mom said goodbye.

Crazy now, looking back. I used to actually feel sorry for her. Why didn’t I recall the time she taught herself algebra, just so she could help me with my homework, how she’d make warm milk with honey at 3am when I couldn’t stop coughing, how she was the loudest voice in the stands when I hit a homerun, or when she crawled into bed with me on a stormy night until I fell safely asleep?

I could go on and on with amazing stories of devotion, not just for me, but for all her children. How naive I was. She was achieving her goals on a daily basis, by devotedly being Mom.

What I took away from that fateful night has become the legacy of my mother’s time on Earth, a mindset that my wife and I will pass down to our children. It’s not the places you travel, plaques on your wall, or material things you accumulate that define true accomplishment. Rather, it’s the love you create, as exemplified by an amazing mom, that validates a life well lived.

Cameron is the creator of the blog Callemonit.com. He writes about how the behavior of others sometimes causes unwanted stress and invites readers to share their experiences. Have you considered confronting the source—calling ‘em on it? Do you need advice first? Or have you already done it? Did this eliminate unnecessary anxiety? Are you happy with your decision?

The Little Things in Life Are the Ones That Matter Most