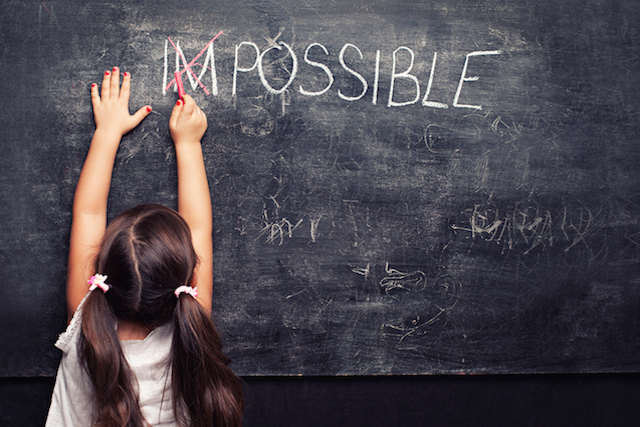 “Turn your face toward the sun and the shadows will fall behind you.” ~Māori Proverb

Struggling to get out of bed every day—but you can’t.

All you need to do is turn off your alarm, get up, and go on with the day. Instead, you hide under your covers, avoiding life. You’ve lost jobs, friends, and a whole more—but still, you can’t make yourself do it.

All you want to be is normal. To live without the huge emotions and downward spirals.

I once felt this way, too. Diagnosed with severe depression and borderline personality disorder when I was young, getting out of bed was brutal.

Part of what makes depression so, well, depressing, is the crushing weight of pessimism holding your head under water. Pessimism makes it easy to believe that nothing will work out, and everything is pointless.

What a terrible way to live life.

On the flip side, an optimistic life is about believing in the best, through the worst.

Were you raised to be an optimist or pessimist?

I was raised an optimist. Believe in people, hard work pays off, things will get better…the usual. As a slightly nerdy and completely gawky teen, life sucked. Classmate cruelty was an unavoidable part of life. Those years were painful. It was mind-boggling how mean, how pessimistic, people could be.

My mother, a textbook optimist, trotted out the usual lines:

It didn’t get better. It got progressively worse as I entered early adulthood. I hid behind alcohol and drugs to numb the pain of feeling.

Involving myself with bad people (you know, the kind you hope your kids never meet) made me feel strong.

For the depressed optimist, pessimism offers a heady feeling of power.

Or, maybe that was the drugs and alcohol talking. Eventually, life overwhelmed me, and it was time to end it.

What was the final straw? The simplest, funny-yet-sad answer is the movie Groundhog Day, and the thought of waking up, over and over again, to a never-ending cycle of anger, hurt, and pain.

So I tried to kill myself. Once, twice, three times. The third time was not a charm. (I’m still here, obviously.)

Fast-forward a year, and while I was officially “in recovery,” I was far from feelings of peace and contentment. I was, however, something else:

A wise therapist once told me my depression stemmed from my life choices and environment, not chemical imbalances. Fix the choices, fix the environment, and you’ll fix the depression.

Not ready to hear that it was my job to fix my depression, I sought out a new therapist.

Still, I was told my pregnancy would go one of two ways: Either I would be completely “cured,” or my depression would quickly get worse.

If the latter occurred, it was unlikely I’d be able to care for my child.

I Had A Choice To Make

Right then, right there, I had a choice to make: Let life lead me, or lead my life.

That’s the reason we need to work our tails off to be, and to raise, optimists: Because a pessimist would never have seen a choice.

As optimists, they didn’t have any other choice.  Neither did I. And that, I realized, was an attitude I wanted to pass on to my child.

I wanted her to be a fighter, to always look for the best in others, to fall down and get back up again—and again, and again.

I decided to be an optimist not just for myself, but for my child.

It’s a struggle to stay positive, and pessimism desperately wants to be BFFs. My negative alter-ego is always sitting on my shoulder, whispering in my ear, “Isn’t life unfair?”

The thing is, life can seem unfair. But life got so much easier, and happier, when I learned how to overcome negative thoughts.

“It figures,” “Isn’t that just my luck,” “It would only happen to me,” and, “I just can’t catch a break.” Words that make you a victim also make you a pessimist. Stop using them.

2. Flip the switch on negativity.

The violent television shows and the funny-but-mean viral videos. Negativity is an insidious disease, and it spreads through seemingly harmless mediums. Turn it off.

3. Refuse to be misery’s companion.

Gently, but firmly, tell your partner/mother/best friend/colleague that you can’t participate in their pity party. Empathy and compassion are important, but learn how to deal with difficult people.

Living bitter-free is a skill. Learn to acknowledge and explore feelings of negativity, but don’t dwell on them. Turn them around, taste them, and set them free.

4. Turn disappointment on its head.

When you’ve had a disappointment or failure, go ahead and finish something (anything). Complete a task that’s been on your to-do list.

When I experience a work disappointment, the first thing I do is complete another project. It forces your head and heart to change gears, and it will point you in a more positive, mindful direction.

When you start to get stressed and depressed, stop and say “thank you.” To anything. Thank your house, for providing warmth and four walls. Thank your car, for continuing to start (most mornings, anyway). Thank your job, even if you hate it, because it keeps you clothed and fed.

Don’t give up on achieving more, but get in the habit of acknowledging life’s little achievements. You’re luckier than you think.

Buy a coffee for the person next in line, hold the door with a smile, compliment a fellow shopper on their outfit, or buy a balloon and ask the cashier to deliver it anonymously to the next kid who gets in line.

Slip-ups are common. Complaining is just so much easier than working to be happy.

Your history plays a huge role in how you view life. Think about your parents. Did life beat them down? Did they warn you to look out for yourself because no one else will?

Your parents were trying, in their own way, to teach you about optimism and pessimism.

But, you can’t just accept life; you have to intentionally live it.

Fight For The Good Life, Every Day

When you juggle work, home, and life, just maintaining the status quo becomes a feat of endurance. It’s often an accomplishment to get through the day. There’s no time left to work on you. But that’s just an excuse.

You have to make time to for good. Find it in every person, in every situation.

You have to fight for the light at the end of the tunnel.

If I weren’t a fighter, I wouldn’t be here today.

At the end of the day, it’s about believing in the power of good, not bad. It’s about turning off the negativity, whether it flows from your mind, your partner, or your TV.

It’s about saying no to pessimism and yes to optimism.

To be an optimist, you can’t let life get in your way.

Ashley Trexler loves honest talk about parenting and life choices. She blogs about the good, the bad, and the funny at LiesAboutParenting.com. She is known for debunking popular parenting advice that just doesn’t work, and is a passionate believer that clean homes create clean minds. She’ll consider herself a parenting success if she can, somehow, manage to raise kind and compassionate kids.