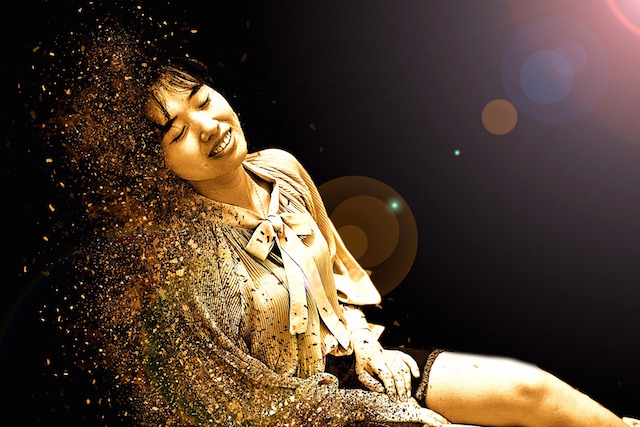 “Each time we face our fear, we gain strength, courage, and confidence in the doing.” ~Unknown

Self-doubt and I are old friends. We go way back, to early childhood.

Now, if you ask me, I will honestly tell you that I had quite an idyllic childhood in a loving home.

My parents raised us—my brother and me—to trust in our abilities and aim for the stars. They held me when I failed or fell flat on my face, which I did quite often, encouraging me to stand up and keep walking again. And yes, self-doubt still made its way into the fabric of my being and cleverly made itself boss, calling the shots at school and among my peers, seeping into my professional life as I grew up and chased my dreams.

Sure, I chased my dreams. But you know how these things work. A thing like self-doubt has the ability to make you overcompensate. Since it tells you that you are not good enough or it gives you the nagging feeling of “wait-till-they-find-out-I’m-not-good-enough” when you succeed, your psyche is pushed to compensate for the lack in every possible way. The most common way, of course, is to over-achieve.

I did exactly that. No matter what area of life I was focusing on, I had to be the best. The best student, the best wife, the best mother, the best doctor. And I never stopped to consider what “best” really means. For instance, whose best? How is it defined? It’s taken me years to realize that the prison of self-doubt had always been unlocked. I merely needed to walk out of it.

In order to overcome any limitation, we have to turn around and face it, study it, and watch it like we would observe exotic animals in a zoo. From my experience, self-doubt is associated with three main processes—comparison, becoming fixated on specific outcomes, and feeling like an imposter.

Comparing Yourself with Others

Self-doubt is defined as the lack of confidence in one’s own abilities. When plagued with self-doubt, we believe that we can’t do something, and if we dig a bit deeper, we will invariably find that this belief arises from comparison. We believe we can’t do it the way someone else does it.

We gauge success and failure by the norm, which is always set by others. Think about this. If you never had the ability to compare yourself with others, would you be plagued either by self-doubt or its opposite, over-confidence?

Fixation on a Particular Outcome

Obviously, comparison is not the only fuel source for self-doubt. One of the biggest things that holds us back from forging forward is the fear of failing. When we become fixated on a particular outcome, not only do we become paralyzed by the possibility of failure but we also close ourselves off to all other possibilities.

For instance, if you’re a writer, you may find yourself reluctant to explore your creativity in your art if you have a particular goal of getting a certain number of readers, accolades, or other outcomes. The joy of writing becomes masked by anxiety if you are not open to failure, however you define it.

You’ve probably heard of Imposter Syndrome, which seems to affect women more than men. If you feel like you don’t deserve any of your accomplishments or that you got to where you are by pure fluke, you may be suffering from this condition.

Here, obviously we are not talking about people that do end up with some successes by sheer luck but about those who underestimate their own achievements. It’s where we might feel like a fraud for being successful.

And then there are the issues of not wanting to appear aggressive, ambitious, or assertive that make us take a step back from our full potential.

Just from my own familiarity with self-doubt, I can attest to what doesn’t help with alleviating it.

Things like positive self-talk, affirmations, visualizations, and go-getting strategies don’t get us too far because they don’t get to the root of the issue—the belief that we are lacking. These techniques remain at the surface level of the mind, never touching the energetic power of the belief that becomes intermingled with our very identity.

How to Face and Conquer Self-Doubt

Whenever we are plagued by beliefs that limit our ability to live happy and fulfilled lives, it’s an indication to look into them. All of our suffering arises from believing our thoughts about ourselves or the world.

These days we hear so much about meditation that we can often lose perspective about what it can and cannot do.

Depending on the technique, meditation can certainly help calm our minds and lower stress and blood pressure—very favorable outcomes.

What it will not do is solve our fundamental problems that arise from limiting beliefs. Instead, meditation creates the space in which we can do the real work of looking within. Most importantly, it helps us cultivate inner silence and the ability to step back from our minds and evaluate our internal processes in a non-judgmental way. If we cannot step back from our beliefs, we cannot work on them!

Writing is a powerful tool for cultivating self-awareness. It forces us to pin down our internal process.

Write without censoring and consider the following questions:

Make a list of all your limiting beliefs. Hint: beliefs are thoughts that start with a “should” or “should not,” such as, “I should not appear ambitious.”

Now that you’ve identified your limiting beliefs, try this. Find fifteen to twenty minutes when you will not be disturbed. Keep your journal close. Sit comfortably and take some deep breaths, giving yourself permission to attend to tasks later. Relax any tense areas of the body.

Now gently bring up your first belief, for example, the one about appearing ambitious. Who decides how you appear? Can you control what anyone else thinks of you? What if you never had the ability to think this thought?

Allow each question to sink into silence without allowing the mind to answer. Take as long as you need to feel the effect of this sinking in. It will feel like a whoosh in your body when you suddenly realize that a thought is completely untrue. You don’t have to let go of anything. When you stop believing an untrue thought, it lets go of you. This is freedom.

Another powerful way of dealing with our limitations is to feel them in our bodies. Start as above, sitting comfortably and taking a few deep breaths. Relax. Bring up the first belief from your list. Where in your body do you feel it? Belly? Chest? Back? Focus entirely on feeling and not thinking. What does it feel like? Is it a heaviness? Contraction? Discomfort?

Feel it fully, without trying to change it. Become curious about it. Does it come and go? Does it move anywhere?

Continue to breathe deeply as the sensations subside. Notice that sensations come and go, but you are here. Our thoughts, beliefs, and sensations are temporary phenomena that become a problem when we hang on to them long after they are gone.

Once you’ve become adept at questioning your thoughts and beliefs in a meditative state, it’s time to put it into practice. Any time you feel paralyzed with self-doubt or when the old patterns start acting up, pause. Now you know that this belief is untrue.

The only way out of this disabling pattern is to surrender to the present moment. Focus entirely on the task and not thoughts about the task, its outcome, or how you feel about it.

If you need to give a presentation, do that. Keep bringing your attention to the tasks of researching, preparing, and rehearsing. Step into your light. What is your full capacity for each task? Do that. When “what if,” “should,” or “should not” thoughts and beliefs arise, drop into the body and feel the sensations while questioning the truth of these voices.

The only thing that we ever have control over is our intention for acting. As long as we keep our hearts open, genuinely value ourselves and others, and act in ways that serve more than just ourselves, we are good. Learn to relinquish control over the outcome, which isn’t in your hands anyway.

As I’ve learned to work with self-doubt, I’ve come face-to-face with the fear of appearing ambitious and of feeling like a fraud for my successes. The more I inquire into this, I realize that these fears lie in my conditioning of how someone like me—a woman in a male-dominated field—is supposed to behave or expect.

The practice here is to drop into the body and observe the sensations as they arise and subside, noticing that all phenomena including self-doubt, naturally pass. Paradoxically, it is when I allow it to arise fully that it lets go of its death-grip and my actions become spontaneous, light, and joyful.

Self-doubt lies either in the past as memories or in the future as imaginary projections. It cannot exist in the now. Action lies in the now, where there is neither self-doubt nor self-grandiosity, both of which are thoughts of the past or future.

In the now, there is only doing what is required. When we learn to ignore our self-doubt and put our best foot forward, it eventually lets go of us. In this newfound freedom, we become fearless, having relinquished the desire for any particular outcome and learned the value of acting for purely the joy of it.

Dr. Kavitha Chinnaiyan is an integrative cardiologist and Associate Professor of Medicine in the Greater Detroit area. She often gives invited talks on Ayurveda, medicine and spirituality, and yoga for heart disease, and is the author of Shakti Rising: Embracing Our Shadows and Light on the Goddess Path to Wholeness (Nonduality Press/New Harbinger, October 2017).

Why You Don’t Need to Eliminate Self-Doubt and Fear