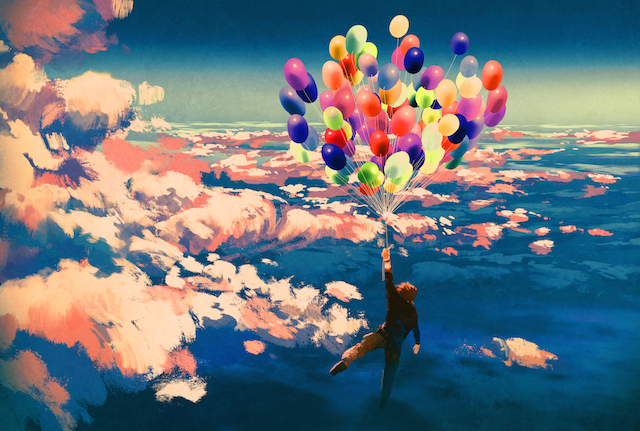 “Do your art every day, no matter how crappy your day is.” ~Ksenia Anske

I was definitely the weird kid. The boy who played with invisible friends out there on the playground during recess. I had what you might call “a rich inner life.”

I guess that’s expected when you’re in grade school. All cool. But as I got older the world began to get unkind. Like the day I realized the stories in my head weren’t really real. Or when that jock guy called me an “art fag” in front of everybody. Or when all the girls said I was weird.

By junior high I did my best to hide my creative heart. It was far too vulnerable. So guess what. I was never really seen. Not in the hallways or the classrooms or the cafeteria. Not at home. Not anywhere. It was just too f’ing scary.

During my college years I finally began to crawl out of my shell. It was always a struggle. I often dealt with it through poetry or lyrics to songs I was writing.

I go uptown, ‘cause there’s a fire in my head

I do downtown, ‘cause there’s no one in my bed

I go around town to try to find a friend

I go inbound because I must defend myself

Eventually I connected with plenty of other creative types—secret poets, guitar gods, heavenly painters, misfit photographers. I learned to embrace my weirdness. My creative flow. The strange and beautiful words, images, and music that poured from my soul. Over time I became less afraid. I practiced my crafts and began to shine my heart in the world.

It took years and years of bloody battles (which still occasionally surface) before I could fully be who I knew I was. An artist. A musician. A writer. A filmmaker. A healer. A teacher.

Since then I’ve won a major award for my music. I made a film about a wise and magical barista that got picked up for international distribution. Had nearly a million spins of my music on Pandora. Shot a zillion photos. Taught college students to rock. Practiced NLP. And wrote a book about how to get your creative dreams off the ground.

Even with this considerable success my fragile heart has been battered with plenty of pain, loss, and disappointment along the way. I’ve bloodied my head from banging against a whole lot of walls (both real and imagined). Many times I’ve sweated oceans of effort without money or recognition as compensation. And that’s okay.

I want to share what I’ve learned with you. Because through my own self-expression I’ve learned more and more about who I am. I’ve freed worlds of pain. I’ve healed shadow parts. These are the real successes.

I know, without a doubt, that your creativity is a beacon of truth and healing. It needs to be known. It takes courage, but it’s worth it.

It’s easy to spend half the day in your head. It’s kind of the default. Unless you’re really engaged in something, we tend to think. And that thinking tends to be in circles. You know what I’m talking about.

When you’re contemplating your dream—whether it’s taking a watercolor class, building a sculpture out of gumdrops, or busting out a short film script about a vampire who loves disco dancing—it has a much better chance of making it to reality if you announce it loud and clear to your people.

If your people are solid, they will get behind you. They will support you. They will want you to succeed. But the fact is that not everybody in the world is in the space to give you what you need. They may be lost in their own nonsense, negativity, or self-doubt. So choose your people carefully.

What should you declare? Whatever it is, it needs to have these components.

What exactly you’re going to do

Why you’re going to do it

There are always reasons why we do things. Check in to make sure you’re doing your thing for a reason that matters to you.

Maybe you’re writing about the vampire because music and dancing saved your life (and you identify as goth). Expressing that gratitude is a big deal. Even if it’s in the form of a cheesy youtube video.

When you’ll do it and when it’ll be done

Important! Without a deadline your goal will quickly fall down the to-do list. So make a deadline. Better yet, make several short-term, smaller deadlines. Like having the script outline done in a month. The first draft done a month after that. And the final draft done by your birthday. So you can go out dancing to celebrate (while wearing fangs).

How your people will know that it happened

It is not your person or gang’s problem to reach out to you to find out if you did what you said you were going to do. It is your responsibility. This is key.

You could announce your progress via email every Friday at 5:00. Or Sunday night. Or on the specific deadline dates. Just ask your pals to be receptive and to give you a thumbs up on your milestones. Or maybe they want to give you gold stars. Or buy you lattes.

Declare your dream. Become accountable. Not just to yourself, but to the people who love you and want you to succeed.

Is anyone really ready? Hell no. I’m certainly not.

Seven years ago I somehow landed a gig teaching college students to write songs. I don’t read music. I barely know theory. And although it’s true that I have tons of third party cred that I’m a pretty kick ass songwriter, I was freaked out and intimated by the job. But I put on my big boy pants, started sweating bullets, and walked in there that first day like I was king of the studio.

There were some pretty huge missteps but soon enough I got a clue. Since then one of my students has won a national songwriting award. Another sang backup on a hit song. After struggling for weeks, one guy who was previously frozen with fear had a major breakthrough. He turned to me and said, “I finally remember why I love music so much.”

We need to find the moxie to start before we’re ready. It’s good for us. And perhaps it’s even better for the people who we touch. The ones we empower with our creations. With our example of courage.

Ever get the feeling that life is a bit like improv comedy? I do. Maybe it’s because I took an improv comedy class. (I wasn’t ready for this either;)

This simply means that you need to accept reality—whether you like it or not— and then add something of value to the story.

In an improv exercise the reality might be that we’re all waiting for the bus and it starts raining hundred dollar bills. Or the doctor comes in wearing a Homer Simpson costume. Or your lover suddenly grows six arms.

Whatever it is, you just kind of have to deal with it. Then take the story somewhere. It’s fun. It’s an interactive game. It forces you to think fast.

Accept whatever the world hands you. Then figure out how to add something interesting, funny, powerful, or helpful to it. Your life will open up. Guaranteed.

“Cool! Wanna write lines of poetry on cardboard signs, ask strangers on the street to hold them up, and take photos of the whole thing?”

The Sweet and Tasty Wrap up

These are simple ideas. But if you step up and into them, they’ll also become delicious. Although it may take a while to get to the good part. Like a tootsie pop.

Yeah, it takes work, courage, and conviction. Of course it’s going to get challenging. I hope so, anyway. If you don’t feel like quitting once in awhile you probably haven’t picked a goal that’s worth doing.

Expressing your truth frees your soul. Opens your heart. And heals your life. Whether it’s through story, images, performance or anything else, creativity is simply not a luxury item. It’s part of what makes us human. And part of what connects us to each other in joy, sorrow, pain and love.

What have you started before you were ready?

How has creativity healed you?

Jeff Leisawitz burns with a mission—to inspire writers, artists, musicians, filmmakers, entrepreneurs (and everyone else) to amp up their creativity, heal their hearts, and shine in the world. Check out his online interactive creativity workshops and get FREE chapters of his book, Not F*ing Around—The No Bullsh*t Guide for Getting Your Creative Dreams Off the Ground here. http://jeffleisawitz.com

Improv(e) Your Life: Lessons on Risks, Gifts, and More