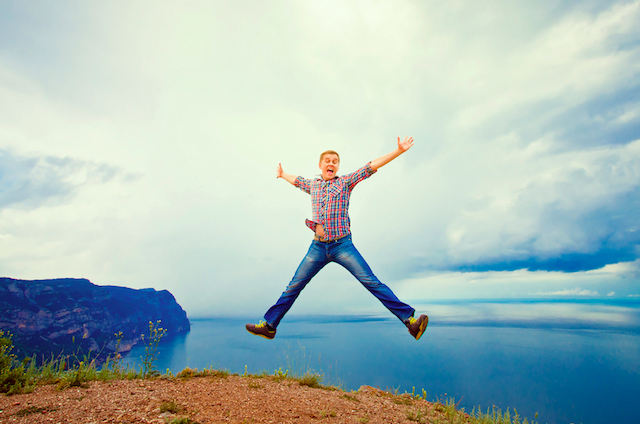 “If you could kick the person in the pants responsible for most of your trouble, you wouldn’t sit for a month.” ~Theodore Roosevelt

The year was 2011 and I had been working as customer relations officer in a private healthcare firm for three years. It was as boring as it sounds, and I had been planning my escape toward self-employment for around a year by working in the evenings as a personal trainer.

I imagined that on the final day I’d exit the office for the last time in a blaze of happiness and jubilation, thrilled that I’d finally taken the plunge. In reality, as soon as I walked out and the summer breeze hit my skin, I got an instant rush of sweaty palms and an uneasy feeling in the pit of my stomach.

“Have I done the right thing? Am I making a massive mistake here?”

The momentum into self-employment had been planned for up to the month before. I’d go into local businesses and offer free sessions thinking that some would convert into paying clients.

It had worked for another personal trainer I knew. By the time I left my job I had four big businesses lined up to visit with my offer.

I knew I was in a challenging situation when I was sat in my kitchen on a Tuesday morning, rain pouring down outside (I live in the UK, after all!), with not a clue what to do next.

In resilience science there is a concept called “critical slowing,” which states that a system is most vulnerable after a period of trauma with little time to recover.

Sitting alone in my kitchen on that Tuesday morning while everyone else was at work, I was experiencing my critical slowing and facing a choice. Do I persevere forward or do I bathe in familiarity (aka – get a job)?

Now approaching my fourth year of self-employment I frequently think back to that moment, the fear I felt, the uncertainty that suffocated every part of me. I think about where I’d be right now if, instead of brushing up on my marketing, I went straight to the job searching sites.

What helped me get through?

In 1519 AD Spanish commander Hernan Cortes led his army to invade what is now known as Mexico. As he led his men to land, he instructed one of his officers to burn the boats behind them so they would have no choice but to fight forward.

While I was in no mood to invade anything, I took a cue from Cortes and made a promise to myself that I wouldn’t go back to the job I’d just left.

I knew if I gave myself the option of going back, there would be a chance I’d choose it because it was familiar, it was a regular income again, and I would have certainty again.

I also knew it most definitely wasn’t what I wanted to do with my life, and so eliminating it as a choice meant it freed up my mind to think about what choices were available to me.

This meant contacting more companies and refining my message about what I was offering.

Lesson: In the height of emotion it is easy to choose the perceived easiest option. This tends to be what’s most familiar. Hold off on this option, as it could be leading you back to what you don’t want.

It’s very easy when starting out in anything to compare yourself to people who’ve ‘made’ it—become a millionaire, gotten the body people desire, the fun experiences shown across their social media. Their success becomes your expectation.

I was the same, and it became incredibly draining, especially after my first week of hell!

I found it important to reassess my expectations. Based on this new feedback of zero sign-ups, I had to reassess what it would be beneficial for me to focus on.

Lesson: Beware of what you’re comparing your reality with. Look at what you think should be happening and decide whether that’s actually helping you or hindering you. Failing is inevitable at some point; if your expectations are blind to this, it’s going to be a big shock.

This is where knowing about psychology saved my skin. I knew that, just because I was thinking in a certain way that didn’t mean I had to take it as truth.

Let me tell you, when I was sitting in my kitchen on that Tuesday morning, people at work earning money, me earning nothing, I was not thinking, “Aaron, you are on fire, you are doing well, this was a great decision!”

But I knew that thoughts tend to be mood-dependent, so I had the awareness to allow them to pass instead of letting them guide any decisions I needed to make right then.

As I moved around in different environments and my mood changed, my thoughts became more rational about what I needed to do. I began to think clearly again and developed new ideas on how to proceed.

Over the years, as I reflected on these three factors that helped me carry on, I noticed they were coping strategies that people chose in others areas as well.

For me, it was my disastrous first week of self-employment, but I saw it in people experiencing trouble in dieting, having trouble in their relationships, or simply going through a troubling period of their life.

The path back to control began in their head. The same is true for you.

Aaron Morton is the founder of The Confidence Lounge (theconfidencelounge.com). He helps individuals increase their confidence and be a high performer in their career. His program Confidence Reloaded is designed to double your confidence in 90 days an open up what’s possible for you.

Being Grateful for the Imperfect Present

10 Thinking Patterns That Can Fuel Depression