5 Common Regrets and How to Avoid Them
By Lisa Cox 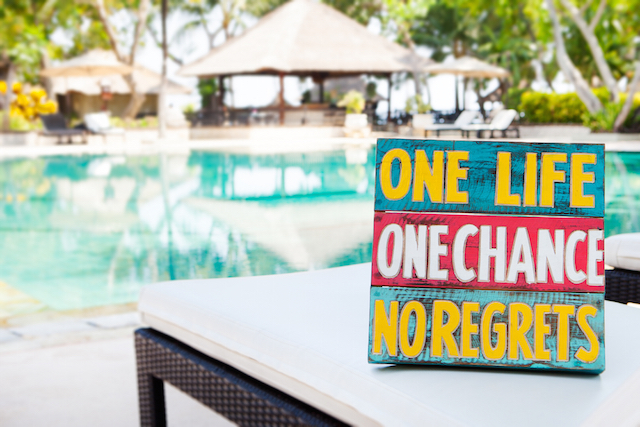 In 2011, Bronnie Ware wrote a wonderful book called Top 5 Regrets Of The Dying.

As a palliative care nurse, Bronnie spent several years working with patients during their final weeks of life. She documented the dying epiphanies of her patients and began to notice some similarities—five in particular (hence, the title of her book).

It’s a beautiful reminder not to take life for granted and to live a life you would be proud of.

Regret Is a Terrible Thing to Witness

For many years I have witnessed the regret of the living—my fellow patients, in over five different hospitals, both interstate and internationally. I’ve been a patient in many ward types (intensive care, cardiac, vascular, orthopedic, infection control, plastics, emergency, and rehabilitation, just to name some). But palliative care has not been one of them.

I spent over a year in hospital. The first time, and the majority of that time, was in rehabilitation. Over the years I’ve returned for more surgery, and again I would pass through rehabilitation wards for several days or weeks. Above: In rehab, learning to walk again.

There’s always an eclectic mix of people in a rehab ward. Some were stroke patients, like me. Some were learning to stand with a new prosthetic leg following amputation, like me. Others were adjusting to new methods of movement without using their arms after open-heart surgery. Also like me.

Regardless of the reason we were all in the hospital, one thing we all had in common was that, unlike Bronnie’s palliative care patients, eventually we were going to go home to start living again.

The hospital can be a very lonely place, and many patients, despite their wounds and ailments, were simply craving conversation.

I’d frequently chat with my fellow patients. It was a good way to pass the time and distract ourselves from the monotony of repetitive (but important) rehabilitative movements.

My fellow patients, all strangers, would often open up to me in a way that I would not experience had I started talking to that same stranger in the outside world.

Similar to Bronnie’s experiences, I heard a lot about regret. But following the confession of regret would come resolutions to do things differently “this time around.”

I’ve paraphrased these most common responses that I’ve heard over the years in rehab—the top five regrets of the living.

Upon reflection, many of my fellow rehab patients regretted not having experienced more, and vowed to do so once they “got out.” The experiences ranged from various things to do, see, or hear, but the most common was the regret at having not traveled more.

The sad irony was that many patients, like me, would be leaving the hospital in a wheelchair or with restricted movement. So experiencing more travel would not be an option.

Resolution: From now on I’m going to experience more.

Many patients regretted not listening more to the advice of their doctor, family members, or well-meaning friends. I remember one larger woman who recalled her doctor advising her to lose weight. At the time, she believed he was “fat shaming” her and had not listened, until she had a resulting stroke.

One man regretted not having listened to his “nagging” family who had warned him against frequently poor diet choices. Diabetes took his leg and left him with regret.

Resolution: From now on I’m going to listen more.

With their second chance at life, many patients were prepared to step out of their comfort zones in the future. Some patients had been so close to death (arguably the ultimate failure) that they no longer feared so many little failures in their day, such as failing to live up to other people’s expectations.

Resolution: From now on I won’t fear failure.

Patients regretted not having voiced their opinions more frequently and stood up for themselves and their values or beliefs. Some had spent years in unhappy relationships or unfulfilling work, and it was only their hospitalization that had been their catalyst for change.

Resolution: From now on I’ll stand up for myself more.

The regret of procrastination was also common, and something that resonated with me. Patients said that they wished they’d done a certain something sooner—pick up the phone, seen the doctor, reunite with a friend… The list went on.

Resolution: From now on I’m going to stop waiting and start doing!

However, the key difference was that my fellow patients and I all had an opportunity to take action on our regrets of the past and ensure they would not be regrets of the future.

What This Means for You

Going back to my question at the beginning of this post: If you had a second chance at life, what would you do differently?

It’s normal to have regrets. If you’ve ever had menu envy, you’ll regret not ordering X instead of Y.

I have regrets, but I make a point of not dwelling on them. Sure, I have relationships, jobs, or situations that I regret not leaving sooner, but those failures have helped make me who I am today.

So don’t be afraid to experience more. Step outside your comfort zone and live life on your terms, free from regret. Listen more to those who only have your best interests at heart. Stand up for yourself, embrace failure, and stop waiting for someone else to live your life for you.

Take it from my fellow rehab patients who have been there before. Those who have regrets but also have the opportunity to reflect on this regret and resolve to make changes.

Take the blinkers off and stop procrastinating. Take responsibility for your own life and your own happiness. We all have challenges, but we all have choices.

Lisa Cox is on a mission to muse and is committed to helping you Find Fearless Freedom. She is an Australian based, award-wining Writer (Author, Copywriter and Blogger), public Speaker and consultant. Lisa’s website, including social media links is at www.LISACOX.CO

How to Survive Hard Times: 5 Lessons from Volunteering in a Hospital

20 Ways to Let Go of Regrets

Feeling Weighed Down by Regret? What Helps Me Let Go