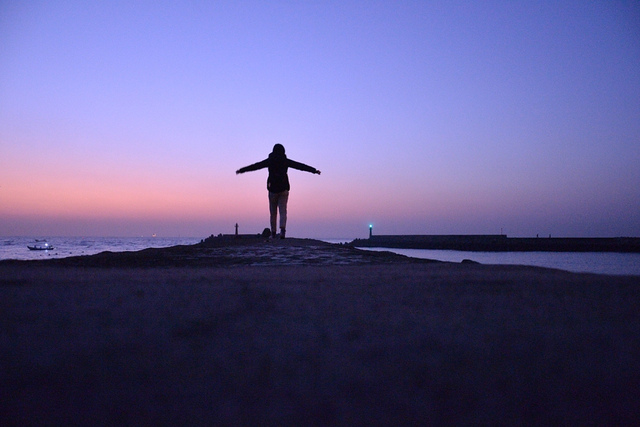 “Have respect for yourself, and patience and compassion. With these, you can handle anything.” ~Jack Kornfield

I learned one of my biggest lessons in life when I ran into a high school bully many years ago. He was totally different from the last time I saw him. He was now passionate about life and adventure, and he looked very happy.

He had a thriving textile trading business and he was set to open a clothing store in less than a year.

After hearing his story, I couldn’t help but feel ashamed of myself.

I realized that in my resentment toward him for hurting me years ago, I had belittled him and didn’t give him a chance to change or prove himself.

Yes, he made a portion of my teenage life miserable. But it was unfair for me to completely dismiss his capability to turn his life around and unleash his true potential.

His story was amazing. He spoke many times of taking risks and breaking barriers. He fought his inner demons as he struggled his way to a new life. He also had to resist negativity from some family members about starting his own business.

I went home that day happy that I had made a new friend, enriched with new life lessons that I acquired from his powerful story.

I learned from him that it is actually we who sometimes stop ourselves from reaching our full potential by not challenging ourselves. I was no exception; I realized that I too had been stopping myself from growing because of my own inhibitions.

Long ago after college, I set my mind on taking a master’s degree. I didn’t make any concrete plans because although part of me wanted to to do it, I was scared of the idea of taking higher-level studies while working full time.

I decided to ignore my fears and apply for admission a few weeks after I met my friend.

I haven’t earned the degree yet, but I must say my growth and experience while studying was very rewarding. I gained valuable exposure to new research information that wouldn’t have been made available to me had I not signed up.

I was also able to establish new connections with brilliant-minded people whom I turn to for professional advice and favors even to this day.

I would like to share with you a few things I learned when I met my new friend; these may help you unleash your own potential.

My friend whose story I just shared told me how his parents’ separation affected his attitude in life. He became bitter as he grew, and this prevented him from making early breakthroughs.

When he was finally able to move on in his mid twenties, he left behind a trail of hurt people and many missed opportunities for personal and professional growth.

Obviously, he was able to make up for the missed opportunities because he was able to put up his own textile trading business. Nonetheless, he could have done more sooner if he hadn’t let his bitterness hold him back.

If you’re holding onto anger and resentment, ask yourself: What might you be able to do if you let it go?

Take risks. Big ones! That was what my friend did when he started his textile business. He could have asked his rich father for support, but he chose to do it on his own.

He started out late in life and he wanted to catch up with everyone by going for broke. He said that even if his investment failed, he knew that he’d learn something valuable from that experience.

Don’t be afraid to try something big. No matter where it takes you, it will enable you to learn and grow.

3. Drown out the voices that tell you “that’s impossible.”

Shameful as it was, I dismissed my friend as someone who was destined for misery. I was so distracted by what I was seeing from him on the outside that I thought it was impossible for him to change. But he knew himself better and he successfully turned things around.

The same can happen for you. No matter what other people say, you have limitless potential to change, grow, and thrive.

4. Break out of your self-stereotype.

When I was growing up, I was fixated on the idea that there were only two kinds of kids: the good and the bad. The good kids had a wonderful future ahead, but the bad ones had nothing but misfortune and suffering awaiting them.

I equated being good with certain types of professions, such as doctors, architects, and teachers. I aspired to be like them, but in my blindness I shut myself from exploring other things that I may have had a chance at excelling in.

Later when I began trying out other things like writing, I began to see that I not only enjoyed them, but I also seemed to be good at them.

Don’t limit your possibilities. If there’s something you think you might enjoy, give yourself the opportunity to find out.

5. Listen when people praise your talents.

Until not too long ago, I wasn’t keen on listening to people’s suggestions on showing and developing my hidden talents. They said “You’re so good at this! You should be doing this more!” But I dismissed the affirmations, thinking that those abilities were not within the parameters of my self-stereotype.

We are our own worst enemy, so they say. It was certainly true for me and my friend.

If you want to unleash your true potential and earn major breakthroughs in your life, you’ve got to start by believing in yourself.

Melina Jordan writes for It’s OK to Die™, a blog where Dr. Monica Williams-Murphy educates Americans to prepare for death and dying.  Dr. Murphy is a board-certified emergency physician, author of OKtoDie book and a Grief-Speaker. If you want Dr. Murphy  to speak at your event then please Visit  OKtoDie.

Why Remembering You’re Going to Die Is the Best Motivator