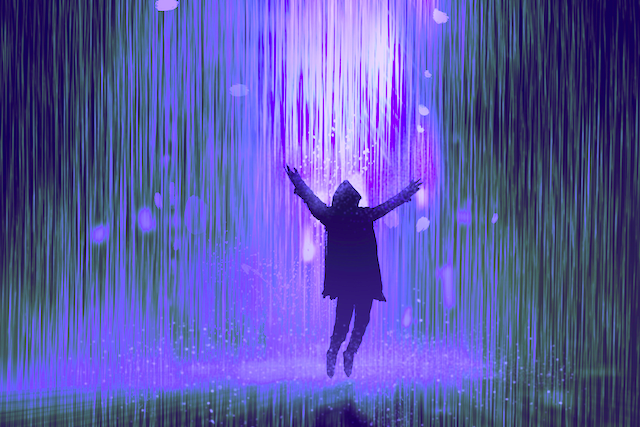 “Remember that sometimes not getting what you want is a wonderful stroke of luck.” ~ Dalai Lama

Recently I received some “bad” news: After years of studying and a nerve-wracking exams procedure, I didn’t make it to the list of the lucky few selected for the upper level public administration job posts.

Having always tried to keep up with a job that made good use of my law degree, while at the same time pursuing my career as a writer, there were times when I questioned whether a law-related job was actually my true calling.

At the time, trying for the public administration exams had seemed like a “best of both worlds” scenario. So, having finally made the difficult decision to take a leap of faith and change my career path, the outcome was certainly not what I had hoped for.

Thus, I was faced with two options: either shrivel up in a corner by the heater, bawling my eyes out for one more shattered dream, or finally establish these new neural pathways I’ve been striving to build this past year of awakening and see the situation for what it really was.

The expected, rather self-pitying reaction was looking at me with tearful puppy eyes, begging me to indulge in it. But this time I chose the new way.

After the initial disappointment, I took a deep breath and tried to focus on the truth of things—that I had done my best for this job opening, and the outcome I was about to fret over was out of my control. I recognized then that I could not change what had happened and I had to accept it. Not surrender, but accept.

In short, you get to have a first-class, one-on-one encounter with your ego. Because it is your ego, not your true self, that demands to control every single outcome of every single plan and effort you make.

According to Jungian psychology, the ego is made of our own beliefs and ideas about ourselves, whether true or false. That’s why the ego’s very existence depends upon keeping these beliefs intact; it cannot allow them to come crumbling down.

For example, you might think of yourself as the best at your job; so when you end up fretting for days over a mistake you might have made at work, this is your ego trying to control something that is out of its power.

In my recent exams’ case, I too could have barricaded myself behind my belief that I normally perform well at academics, and allowed my ego to keep nagging me about my not attaining my goal—but this time I chose perspective, not ego.

Preparing for a job interview or exam? You can minimize your potential errors by studying thoroughly and keeping yourself in good shape, both physically and mentally. This is what lies within your control: your own choices and attitude.

Beyond that, there’s only the realm of unforeseen, uncontrollable external variables. Things may not turn out as you hoped they would, and there’s nothing you can do to guarantee they do. You can save yourself a lot of heartache by acting but not expecting.

By being aware of what lies within your power and what does not and accepting that certain things are out of your control, you also end the self-pitying, self-victimizing cycles. You stop blaming others, the Universe, external variables, and yourself. Which brings us to my next point.

2. You boost your self-knowledge.

Take a relationship gone bad, for example. Mourning a bit is, of course, part of the equation, but after a while you’ll find it far more rewarding to focus on what you learned about yourself, thanks to this experience.

What are your real needs, your true nature even? What can you stand and what can you not? Once you get clear on the lesson, you’ll be able to make wiser decisions going forward.

When reflecting on my recent professional setback, the major thing I learned about myself was how easily un-grounded and un-mindful I could get whenever the going got tough.

Trying to discover why this was so, I recognized my second lesson: I had to work on my need to control the outcome of my efforts, in all areas of my life.

By choosing to focus on the bigger picture when coping with my “failure,” I was able to move on from it more quickly. I even found myself working on my next novel sooner than I would have, had I remained stuck there, crying over spilled milk that might have even proved not to be my cup of tea.

The greater the impact of a failure, the greater the opportunity to learn about yourself—if you get past the disappointment and, instead of wallowing, spend your time more productively, confronting your weaknesses.

By that I mean taking responsibility for any choices that contributed to your failure and identifying why you might get so worked up each time things don’t go according to your plans. Is it low self-esteem? That fragile ego again, that has learned to exist and breathe only depending on external milestones of success? If yes, then give it a nice goodbye pat on the back and reclaim your true self.

3. You have an opportunity to practice living in the moment.

When you fail at something, you’re reminded that there are no guarantees in the future, and that all that really matters is what you choose to do in the present.

In this way, failure reinforces the importance of mindfulness, the act of being completely present in whatever you’re experiencing here and now.

My career choice “gone bad” also taught me that it can make a plan’s failure sting even more if you put all your energy and hopes on it, at the expense of other plans or areas of your life.

Putting socializing with friends or family on hold, for example, for the sake of devoting yourself to a certain career goal actually deprives you of a very important part of your present. Life happens simultaneously, in all these areas, and we miss out when we focus too intensely on any one specific goal.

Mindfulness isn’t just about appreciating what is; it also enables us to better accept what will be. When we make the conscious choice to take life moment by moment, we become more grounded, and that helps us better adapt when things don’t go according to plan.

4. Failure reminds you to focus on the journey.

I might have sacrificed infinite hours studying Macroeconomics and other subjects entirely outside my area of expertise, in pursuit of the career change I ultimately didn’t manage to achieve; but this arduous procedure has left me with precious and detailed knowledge on subject matters I would have otherwise never acquired. My newly obtained knowledge on economics even helped me with the novel I’m currently writing!

Also, on this difficult journey I met many co-travelers who shared the same goal and the same struggles, and whom I now regard as my best of friends.

Do you really regret meeting all the people you met, learning the things you learned, and growing through your journey, even though it didn’t get you where you wanted? Nothing is a waste of time and energy if you gain through the experience.

5. You open yourself up to something even better down the road.

Some years ago, I had the unfortunate experience of growing close to someone suffering from covert narcissistic personality disorder. Before then, I knew nothing about this condition and only began learning about it after I’d been gaslighted by this person’s inconsistent behavior long enough.

The thing is, until that moment of revelation, I’d been beating myself over why I couldn’t make this relationship work, and had considered the whole thing my failure. After that, I realized how this “failure” had protected me from getting deeper involved in something that wasn’t healthy for me, and how it opened me up to a better relationship in the future.

From this experience, I learned that we shouldn’t spend so much time getting depressed in front of a closed door that we miss the window that has opened for us a few blocks down the road.

Have you ever spent nights crying over unfulfilled dreams, only to recognize later that, if they had been granted to you when you wanted them, you wouldn’t have set out on the amazing journeys you ended up taking because those dreams didn’t come true?

Yes, I know you have. And if you’re going through the aftermath of one more “failure” right now, know that amazing journeys are ahead for you now too.

Constantina Koutsoupia is a writer, holder of a Master of Laws in History and Theory of Law from the University of Athens. She has years-long experience as a lawyer, is an Honorary Reporter for KOCIS (KOREA.net) and a contributing author in various e-magazines, as well as for the Korean Embassy in Greece. For more on her publications visit constantinamaud.com.