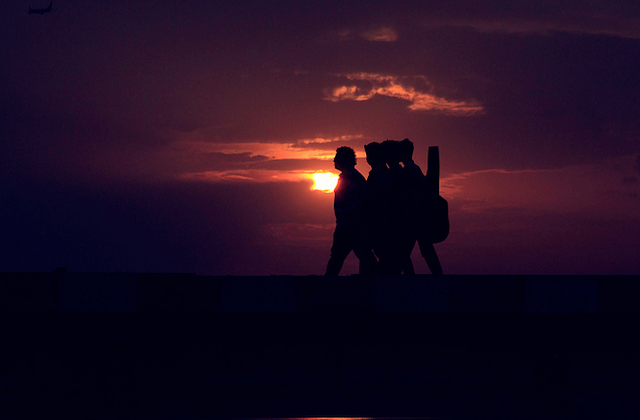 “Above all, be true to yourself, and if you cannot put your heart in it, take yourself out of it.” ~Unknown

For probably over thirty years—since I was old enough to know I needed them—I’ve been looking for my people.

You know the ones—the people who get you, somehow; who are on the same wavelength. Some might even say the people who share the same brand of quirky, crazy, or oddness that you do. The ones who understand why you do what you do, or if they don’t understand, they either ask or they just accept, and either way is fine.

It’s not that there was anything wrong with my family or my school or the few friends I had, or my neighborhood—not at all. We all had our ups and downs, but we moved on and through it and had good times and bad. But I just felt a deep sense that the people around me were aliens. Or I was.

At one point during childhood I even made up a story in my head about how I had been placed with my family as an experiment to see how someone would grow up with people who barely even shared the same language. I’m sure a lot of kids had similar thoughts.

As I grew up, I continued feeling this odd sense of never being at home, safe, or comfortable.

Sure, I had friends and close family, and ended up successful in my career, but there was a kind of connection I was missing. Something where my particular gifts were treasured, and my particular sort of oddness was accepted and cherished; and where I felt safe enough to cherish and embrace the odd gifts of those around me.

I looked for safety and comfort in lots of ways: in relationships, in books, in short-lived hobbies, in TV, in long nature hikes, in workshops on “finding your purpose” or “finding the love of your life,” in meditation, in yoga, in spontaneous road trips. And there’s nothing inherently wrong with any of those, but it was when I got out of my comfort zone that I finally found what I had been looking for.

It happened when I followed my heart into the places that interested me.

At first, I joined a group of people that I wanted very much to like me. I tried to be likeable, to support them and to do the work that was required to make our projects successful, to help out when I could, and I attended every party and event. But something wasn’t right.

Though we shared a lot of interests, I felt like they never truly accepted me for who I was. There was a sense that they wanted me there to work and to even admire them, but few people seemed to be curious about me or to allow me in to become closer to them when I tried to become friends.

There was an odd sense of people always keeping me at arms’ length. For several years, I decided that there was something wrong with me, which was why they didn’t seem to truly accept me.

But one day, after camping with this group and feeling, again, that sense of not-belonging, I decided that it was neither me nor them. We simply weren’t a good match.

I kept looking, following my heart into another group within the same larger community. This time, they seemed to genuinely accept me, to like me, to respond to me, to open up to me, and to both value me and appreciate that I valued them. And I did value them—I do. They’re a bunch of amazing creative, smart, motivated, fun, and genuine people. And it was like night and day.

It’s not that everything’s perfect and that there are no conflicts or awkwardness, that everyone always gets along or that there aren’t moments of ambivalence where dynamics seem to shift.

But the people I’ve found more recently, after allowing the ones that didn’t seem to click to move out of my life, seem like they’re going to stick around. And I feel like making the effort to make sure that my friendship and support will keep these people in my life for a long time.

Here are some steps to finding those people who will love, support, challenge, and accept you:

It doesn’t matter if you do it for work or do it for play, but do what you like to do. Sports, hobbies, hiking alone, travel, reading, collecting cigars, whatever it is, do it. You don’t even have to be super passionate about it, but if you enjoy it, do it.

For years I thought nothing was worth doing if I wasn’t Passionate-with-a-capital-P about it. But just enjoyment is enough. And spend the amount of time doing that thing that feel right to you.

2. Learn how to talk to strangers.

Every stranger is a potential friend, as they say. I’ve always been really shy, but when I focused on doing the things I enjoy, I started to get less shy, at least about those things.

3. Find other people who do what you like to do.

These days, with online social media and the Internet, you can pretty much find people who like to do anything you like to do. From knitting hats for cats to collecting particular kinds of rock, from listening to any kind of music to reading the collected works of obscure Romanian poets. If you like it, someone else likes it, I can almost guarantee it.

Find them, and introduce yourself. There is no rule that says “your people” have to live in the same town as you.

4. Participate, even if It’s scary.

Just because some people like what you like doesn’t mean they’re “your people.” You may have to keep exploring your interests for awhile, and keep exploring groups who share those interests. But when you find people who seem like they can handle you, step in and help out.

If it’s a group that meets in real life, volunteer your home for a meeting or offer to help out at an event; if it’s one person, invite him or her out to partake in the interest you share. You may feel awkward, but that’s okay. Awkward just means you’re stretching yourself.

5. Be honest and present.

Once you’ve met people that you feel you want to connect to, practice being brave enough to be open about that with them.

One of the first groups I thought were “my people” actually kind of intimidated me, and I never got up the nerve to be honest with people in the group about that. I ended up finding a related group that didn’t intimidate me as much, but I still wonder, if I had been willing to share my vulnerability with that earlier group, if I could have been able to connect with them more deeply.

Take up space with the people you think might be “your” people. Practice being open, saying what you feel, and being present with them. See how they react. The ones who stay with you in those moments of vulnerability, not judging you or criticizing you, are truly your people.

Melissa Kirk is an editor, writer, and blogger living in the SF bay area and attempting to go with the flow and roll with the punches as much as possible. She writes for Psychology Today and also has a personal blog.

Create New Opportunities by Challenging Your Judgments and Reactions