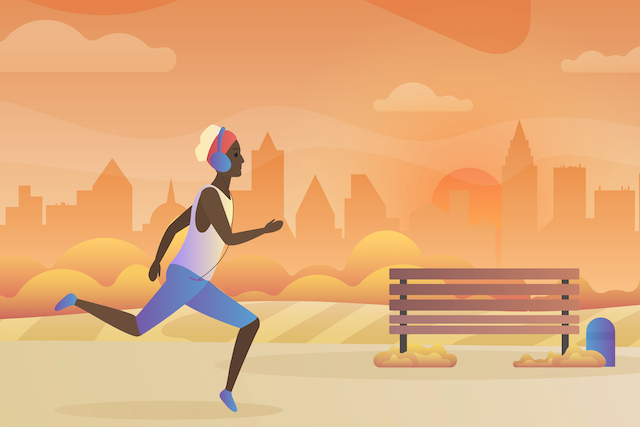 “Your net worth to the world is usually determined by what remains after your bad habits are subtracted from your good ones.” ~Benjamin Franklin

You probably agree with that statement.

But, for you (and everyone else) the problem is that good habits are hard to form and bad habits are easy to keep.

It is certainly true for me. Like most of us, I meant to start exercising for about six years after I started my career.

But it never happened. I’d do it for two or three weeks here and there, but nothing that ever stuck.

Then, all of a sudden, it did.

And it did because something changed for me. I had a son that was old enough to mimic me who I wanted to be able to keep up with for the next twenty years.

That scared me straight essentially.

In a number of areas in my life, including fitness, I realized he was going to base a significant portion of his view of how to live life and what habits were important off of what he watched me do.

So I stopped acting like I was going start exercising and actually did it.

To create my new habit, I used a combination of the techniques below.

You can use them to firm up your new habit and get your good habit quotient up.

We’ve all told ourselves that, even if we didn’t do what meant to, at least we meant well.

“I meant well” is a pretty good way to make sure your habit won’t stick. It is making your intentions the ultimate measure.

The problem is, you don’t actually have to do anything to have good intentions. So you won’t.

Deciding that what you value is results rather than intentions is critical to you actually forming your new habit.

When you shift your value from intentions to results, you will stop just talking about starting the habit or trying to figure out the perfect way to do it, and just start doing it because that is the only way to get the results you want.

You will figure it out along the way, and when you do, you will be much closer to the result you want.

Start whatever habit you are trying to create the day you decide to create it.

No need to wait for the next Monday (or the next day you get a solid eight hours of sleep or when a magical fairy whispers in your ear that you should start today).

Delay will have two consequences you want to avoid: a) you lose the days between when you decided to start and when you actually did, which you could have used to practice your new habit and b) instead, you will have spent those days practicing exactly what you are seeking to avoid, not doing the habit.

So start now, and use those precious days to practice the result you actually want.

Starting a new habit is hard and keeping it is harder. But if you know why you are doing it, it makes it much easier to stick to.

Using the example from my life, when the reason I was trying to work out was because it was something I was “supposed to do,” and I wanted to lose the extra pounds because my clothes fit tighter than I liked, it didn’t work.

But it finally clicked when my “why” became to keep up with my high-energy son now, to be fit enough to keep moving and playing well into old age, and to be a good example for him.

Now, if for some reason I have to skip a workout, it bothers me instead of giving me a sense of relief. It’s been quite a change.

For you to make the change, you also have to have an actual goal that you care about, that is yours, not what everyone says you should do.

Then creating the habit will be about the why, not the habit. The habit that is just a means to the end you want.

So if you miss a day, you aren’t just missing a day of your habit, you are missing an opportunity to get to your goal. That’s much harder to skip.

4. The how is irrelevant; talk to yourself about the why.

This is a huge one. How we talk to ourselves about the new habit will almost completely determine whether it sticks.

Do we talk about the habit as just the habit, or in terms of why we want the habit in the first place?

Here’s what I mean, using my fitness example…

Back when I couldn’t make it stick, my self-talk fairly often went like this:

“I’m tired; I need another hour of sleep (despite having watched three hours of Netflix prior to deciding to go to bed the night before), so I’ll skip the workout today. It’s no big deal, I’ll get it tomorrow.”

I’d have this conversation a few mornings in a row, and eventually I didn’t even go through the trouble of having it; working out out just wasn’t an option anymore.

But then it changed. On those mornings when I hadn’t gotten a good night’s sleep, I started talking to myself in terms of my “why,” not my “how” (the actual habit).

That went like this: “Do I want to exchange this chance to be a good example and a more active father for an hour of sleep?” I never said yes.

When you are asking yourself whether today is the day that you skip whatever your habit is, frame it around the result you are seeking, not the action you are taking to get the result.

You are much less likely to bail because doing so will be essentially deciding you no longer want that result.

5. Decide once, and never decide again.

So make it easy on yourself; decide once at the beginning that whatever your habit is, that is what you do now, and then don’t ever reconsider the question.

I leaned heavily on this one when starting to workout regularly.

I didn’t decide I would workout today.

I decided I would get fit and stay fit, and I decided that working out three days a week (MWF) was how I would do it.

Not working out stopped being an option. I didn’t have to face whether I would workout every day, I had already answered that question when I decided I would get fit, so I stopped asking it.

I definitely have to remind myself of it every once in awhile, particularly on nights where I don’t get near the sleep I would like.

But I still, for the most part, never ask the question. I just get up and go.

Decide once and be done with it.

Declare that you are the person that does your habit because you want to reach your goal, then act in accordance with that declaration.

Put yourself in a position where you are committed before you have to commit. Do something so that you will have to actively undue it to avoid performing the habit.

To continue my workout example, the night before I am going to workout, I put my gym bag together, get out my workout clothes and shoes, and put them in a pile in my living room.

Now, for me to not go workout, I will have to put those clothes back up. I have to actively do something to not workout. So, instead, I put on the clothes and go workout.

Find something you can do that commits you to performing your new habit before you actually have to perform the habit, and, since you already have to do something, you will likely just do the habit instead of undoing the thing you did.

Take one or more of the six methods and apply them to that habit you can’t seem to get to stick.

You will be pleasantly surprised at how much easier it will be to actually stick to it this time.

But, before you do that, I’d love to hear what has helped you create and keep new habits, either one of the six above or something else. Please leave a comment below and let me know!

How Simple Little Happy Habits Can Make a Huge Difference