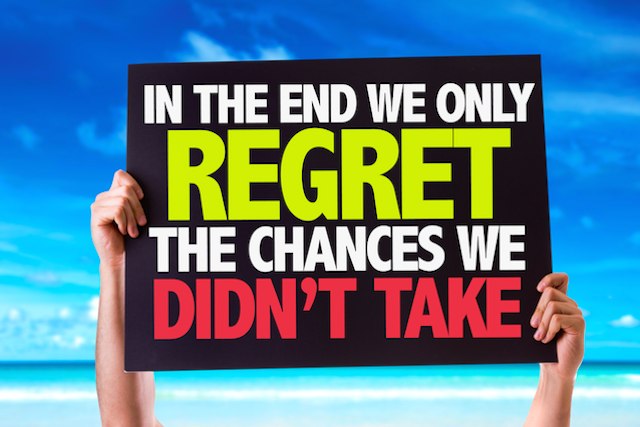 “See the positive side, the potential, and make an effort.” ~Dalai Lama

Until fairly recently, I was somewhat afraid of talking to girls.

Well, that’s not exactly true. I was afraid of talking to girls if I had a romantic intent. If it was an innocuous conversation, I could be cool as a cucumber.

As you can imagine, this stifled my romantic life somewhat. If I met someone and things were going well, once I realized that she liked me a little and I could move things forward, I would freeze up. Self-sabotage.

This was very frustrating to me, and I know that I’m not the only one who has experienced this phenomenon. In some ways, it looks kind of like a classic case of “fear of success.” But in reality, it was more subtle than that. Consider the following situations:

Scenario #1: Imagine that you see someone who you are attracted to walking down the street. You’d like to go strike up a conversation with this person, but you feel some anxiety. What if they don’t like you? How embarrassing it could be! Your mind fills with all kinds of negative thoughts.

Scenario #2: Now imagine someone on their bike loses control and is barreling down the sidewalk toward them, but the object of your attention doesn’t notice. How much would you hesitate before yelling at them to move out of the way, or even to grab them and help move them out of harm’s way? I’ll bet you didn’t have to think twice.

In each of these situations, the action that you want to take is to talk to someone who you are attracted to. But the intent behind each is incredibly different.

I realized that when I wanted to talk to a girl in a romantic context, the intention behind my action centered on my wanting something from the girl. There was no malice or anything—it’s just that I felt as though I needed to “get” their romantic interest. It’s something I was “taking” from them.

In hindsight, this was such a silly thing to believe! I must have felt that somehow I wasn’t good enough, that she wasn’t going to receive some benefit from talking to me. She would be doing me a favor by giving me attention, and I was somehow imposing a burden upon her.

You can imagine how this intention might make me feel bad about going after what I want.

But that need not be the intent that I go into the interaction with. I’m a pretty cool guy and I have a lot to offer. Instead of my intention being “I want to get her to like me,” why not “I want to make her smile,” or “I want to share my positivity with her”?

When I started going into my interactions with women with a positive intent, the difference was extraordinary.

I used to be far more hesitant, but why would I hesitate to share my positivity with someone? Most people are very welcome to having positive experiences, so why would I be nervous?

That is the power of having a positive intent. But while dating may be one of the most obvious and easy to relate examples, this principle can be extended to many other areas of your life.

It’s far easier to motivate yourself to take any action when you know you are doing so with a positive intent. And when you do take that action, you are more likely to be successful with it.

Let’s say you are considering applying for a job that you think you’d love, but it might be a stretch to get it.

You might be thinking something along the lines of “I want this job because I know I’ll get paid a lot and have a good time doing it. But they are asking for five-plus years of experience and I only have three, so maybe I shouldn’t bother…”

It’s a very understandable intent (who doesn’t like getting paid and enjoying their work?), but it leads to a thought process that isn’t conducive to your success. You can see how much less likely it is that you’ll even apply for this job in the first place. And if you do apply, do you really think your best self will shine through?

Far better would be to have a different intent: “I want this job so that I can make a positive contribution to an organization that I believe in.”

Even if you don’t have all the experience that the job listing is asking for, you still want to contribute to this organization, so why wouldn’t you apply? And if you get an interview, you are far more likely to focus on how you can help the organization, and that will improve your chances of getting an offer.

The next time you are feeling unmotivated or are anxious about doing something, examine your intentions.

Getting yourself to actually pursue what you want could be as simple as reframing your intent.