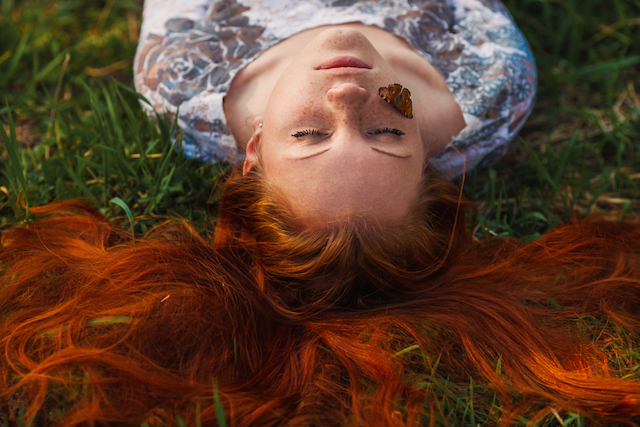 “How ironic that the difficult times we fear might ruin us are the very ones that can break us open and help us blossom into who we were meant to be.” ~Elizabeth Lesser

This past May I graduated from college, where I majored in Environmental Science. I chose this subject for one simple reason: I love learning how the world works.

There are always strong connections to be made between humans and other species. Every time I hear a unique, astonishing fact about other animals, I feel more connected to the world around us rather than more separate.

My latest bewildering discovery came from the radio.

I was driving in my car, heading to the grocery store but mostly in need of some fresh air. I had spent the day inside, applying to jobs and pondering the next step of my life. Riding along, listening to the radio, provided a source of calm.

The segment was on NPR’s RadioLab and the subject was “black boxes.”

On NPR’s website, the hosts describe black boxes as: “those peculiar spaces where it’s clear what’s going in, we know what’s coming out, but what happens in-between is a mystery.”

The hosts announced their first topic of discussion: a caterpillar’s transformation to butterfly.

The black box, in this case, is the chrysalis within which the caterpillar’s body changes into a butterfly. We know the caterpillar and we know the butterfly, but many of us do not know what happens inside the cocoon.

I was hooked. Sitting in my car, I had parked but couldn’t turn off the radio.

I wanted to hear what exactly goes on in the chrysalis. What does it look like inside this hidden chamber? Is it what I’d imagine?

I predicted that within the cocoon, caterpillar cells begin to replicate on either side of the body in a symmetrical pattern. Maybe the wings curl around the body as they grow.

If you open a chrysalis about a week after its conception, there is no discernible caterpillar. Within the chrysalis, the caterpillar actually digests itself. The enzymes released by this process create a sort of goo in place of the caterpillar.

The creep-factor of this for me was akin to watching Silence of the Lambs. The story was as perturbing as it was captivating.

I believe what fascinates me most about the caterpillar’s transition into butterfly or moth is that the original wormy fellow neither stays fully intact nor completely disappears. The “goo” is actually a collection of cells that replicate where they need to.

The butterfly’s organs, such as the antennae, the wings, and legs, all develop through the constant division and replication of cells that collect from caterpillar goo. Even more interesting, some species of moth have been shown to retain some memory of their caterpillar lives. The cells, therefore, hold qualities of their original character.

The metamorphic process is evolutionary, and it is encoded in the caterpillar’s DNA.

I do not believe that the small creature makes a conscious choice to turn himself into goo. Rather, he does so by default just as his ancestors have been doing for millions of years. I know this logically. And yet, there is something abstractly beautiful about the concept.

I love that the caterpillar trusts it will become a butterfly. It is willing to break itself down for a short period of time, knowing that the result of its self-destruction will be as grand and sensational as a butterfly or moth.

What fearlessness required, what self-confidence! The caterpillar eats and eats for days, plumping itself up for the process of its own obliteration. That takes some serious bravery and commitment.

Last month, I put on a graduation cap and gown, and I, along with millions of other graduates, took a leap from the comfortable role of student to something as yet undefined.

One moment, I could define myself by my courses, my friends, and my ability to navigate campus. The next moment, it became a lot harder to define myself, as my entire environment changed.

I have been wondering a lot lately about where I’m headed next. Is there any clear-cut path or formula?

Looking on Instagram and Facebook it seems that everyone is confident in their post-graduation choices, whatever they may be.

I feel that I am somewhere in between, applying for jobs but still unaware of my first step, and uncertain of the specifics of my future.

The questions are normal, even necessary. But hearing about caterpillars, I realized something important about how I’ve been navigating my transition.

I, along with many of my friends, have been envisioning my life thus far as having two separate stages: one during college and one after.

The first stage we view as preparation. We feed ourselves with the tools necessary to grow, just as the caterpillar does. After college, we expect to become a butterfly. On top of this, we expect the transition to occur rapidly and effortlessly.

Before I graduated, I had a lot of anxiety about remaining active and engaged after graduation. Looking back, I realize I was desperately scared that I’d lose myself—that the transition would seize the “me” I knew and morph me into some worse version. But what if these fears ended up being more dangerous to my growth than the transition itself?

When I view this period of time as my black box, instead of feeling anxious that I will lose myself, I feel excited by the opportunity to rebuild.

I trust that whatever is contained within the black box, is still “me.” So what if it gets a little gooey? Times of transition are meant to be gooey; we are meant to settle into ambiguity before we are able to achieve clarity.

This mentality has helped me to take positive action toward starting on my new path.

This doesn’t mean it’s easy. My identity is undergoing a breakdown of boundaries. It can be scary.

I do fear on some level that, like the caterpillar turning to goo, I will lose everything that defined me, other than DNA, of course. But however scary, it can be more fruitful to spend time in the black box than to rush the process of becoming a butterfly.

During a time of transition, it’s important to give yourself space and time to break yourself down and settle into the uncertainty of the moment, to take a pause before stepping forward.

Maybe the caterpillar has it right. Before becoming a butterfly, the caterpillar loses all structural integrity; he does not fight to keep his body as it was. Nor does he entirely disappear.

Instead, he changes form, while maintaining essential parts of his former identity. In the end, he builds himself back up as a better version of himself, this time graced with a pair of wings, and poised for flight.

I am confident that after time in the black box, I will emerge more capable, more mindful, and more me.

If you are also in a black box, having just completed one phase while preparing for another, know that nature provides these spaces for a reason.

These periods of transition, with all of their anxiety and ambiguity, are critical to our growth. There are times in our lives when the best place to be is inside the black box.

Woman with butterfly image via Shutterstock

Chloe Kunstler is an aspiring teacher, mentor, and writer. Her recipe for happiness is yoga, time outdoors, and delicious local food. Soon to complete her ISSA Personal Training certification, Chloe hopes to help people find their own recipe for health and happiness. Chloe received her BA in Environmental Policy at Barnard College, where she studied climate change, geology, and groundwater contamination.

How Releasing Control Opened Me Up to a Limitless Life

It’s Time to Stop ‘Fixing’ (Because They Need the Struggle)