Accepting Blame and Asking for Forgiveness
By Pernilla Hjort 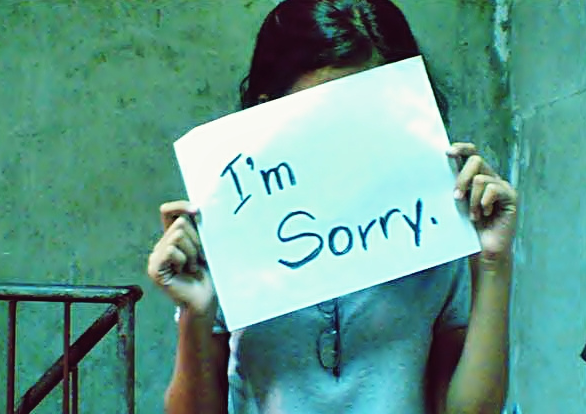 “Never ruin an apology with an excuse.” ~Kimberly Howard

As a kid I was quite often “långsur.” Långsur is a Swedish expression for being grumpy for a long time. Every time someone was mean to me, I sulked for hours, even days. This became quite tedious at times, especially since as soon as I became happy again, some new event triggered me to sulk again.

You get the picture.

I simply had such a hard time forgiving people.

It went the other way too. I found it hard to admit that something was my fault. At least out loud. Inside, I blamed myself, but I could not get the “I’m sorry” across my lips.

As I grew older, I realized no one liked Miss Grumpy and those long days of sulking had to be shortened a wee bit if I wanted to keep some friends, but to be honest, forgiving was still hard. Also, even though I was happy on the surface, many days I was still “långsur” on the inside.

Guess who suffered the most from this?

It was not until I had kids that I really got out of this extremely negative mindset.

All of a sudden, I didn’t have time to sulk. Diapers were to be changed, bottles heated; and sleep—that wonderful thing we all take for granted BK (before kids)—was to be enjoyed, or rather desperately grasped at when there was a moment.

Not only did I no longer have time to sulk, I also realized that for us parents to mentally survive, we had to be able to communicate quickly, honestly, and rationally. We had to make decisions without hesitations. We made mistakes all the time, but we survived them.

At this stage, a baby’s life depended on my behavior. It was not just me anymore.

It was at this time that I realized that you can actually get mad and stop being mad in matter of minutes, as long as you set your mind to it. It was up to me to decide how I wanted to feel inside.

And, if I did wrong toward another person, there was a liberating sensation in saying I’m sorry and moving on. No dwelling.

Okay, so did it take me 30 years to realize this? Of course not. Kids learn to say I’m sorry at a very young age. So did I. But to intrinsically comprehend it, in and with my heart, to truly and utterly feel it, yes, it took me quite some time.

And just as the penny dropped, I made a new discovery about forgiveness: A new guilt-free world has evolved.

I can see it in the world around me, in different relationships, privately and at work. Even in therapy sessions, we don’t discuss whose fault it is anymore. Over and over again, we are told that it is not our fault, that no one is to blame.

We don’t allow ourselves to admit doing wrong anymore.

It’s as if guilt is something forbidden and dangerous. We quickly explain that we will not judge, as long as you tell the truth.

We use excuses such as “It just happened” or “I’m only human.” No one does anything wrong anymore, and suddenly all is allowed.

Wouldn’t it be better if we came clean and honestly shared our dark sides?

“Yes I was unfaithful and it was my fault,” or “I forgot your birthday again because I’m crap at remembering birthdays.”

What if we honestly and openly admitted to our shortcomings and then asked for forgiveness and tried to improve? There’s a releasing sensation in the words “forgive me.” And perhaps we’re missing out on that experience if suddenly all is allowed.

Shouldn’t we create a world where we admit to not being perfect?

First of all, for our own sakes, but also for the person we did wrong to. Perhaps we should allow ourselves to acknowledge we sometimes make bad choices, admit our faults, and embrace our imperfection.

It’s when we admit to our shortcomings and then ask for forgiveness that the healing can begin.

Maybe admitted guilt is a gift that leads to personal development and peace.

Perhaps when we confess and ask for forgiveness we also grow a little in the process.