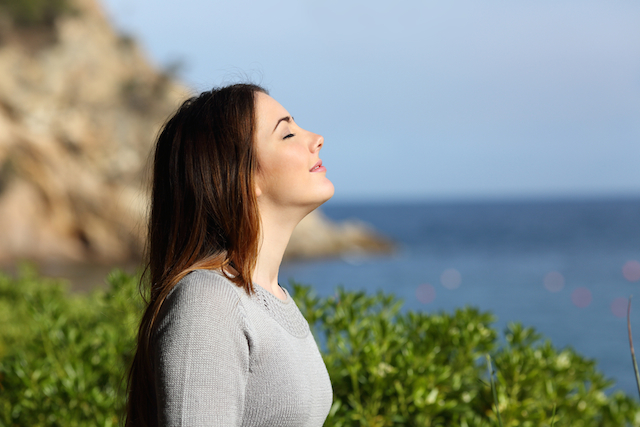 “What we see is mainly what we look for.” ~Unknown

Years ago I was fortunate enough to travel on a Mediterranean cruise. I had just graduated from college and was in that difficult transition stage where I didn’t know what would come next. I was looking to relax, but also hoping that some soul searching would lead to clarity, epiphanies, and answers.

One day I thought I found them on the island of Santorini, Greece.

Between the blinding whites, the sapphire blues, the sun-kissed streets, and the black-sand beaches, I felt like I had been dropped in a utopia.

There, where everything was crisper and brighter, my mind felt clear and my heart felt hopeful. I suddenly had the feeling I would find my way and all would be right in my world.

As I lay on the beach made from volcanic ashes, overflowing with happiness, I knew I wanted to remember the moment, capture that feeling and preserve this place.

I strolled down to the shore where hundreds of rocks were piled together. They were all jet black, oval shaped, and glistening. I picked some up and felt like I was holding little pieces of paradise in my palms.

I collected a dozen or so. The plan was to wrap them in a towel, bring them home, put them in a decorative jar, and always be reminded of the beauty of Santorini.

I imagined my future self, back at home, thousands of miles and hours away from this peaceful sanctuary.

I thought these rocks would become miniature touchstones any time I was feeling down or confused—that I would look at these black slabs, be transported back to this moment in time, be reminded of Santorini, and feel instantly better.

When I got home, I unveiled the rocks and immediately felt disappointed.

Without the shimmering sun and the sparkling Aegean waters, the rocks had lost their magic, their glory.

All I had in my hands were a pile of greyish looking stones. In the light at home, away from the Grecian sands, I could see the rocks weren’t breathtaking or naturally shiny and they certainly weren’t that memorable.

They were just…. well, rocks.

I wasn’t reminded of the feeling on the beach. Instead I was upset that what I wanted the rocks to be was clearly not their reality. Somewhere the rational part of my brain knew this was ridiculous, but I was still angry.

It wasn’t until recently that I realized how these rocks did in fact, give me a gift. They taught me a few important lessons.

In life we can have a tendency to take something and try to make it into another thing. Does it work? Sure, sometimes. After all, we can take lemons and turn them into lemonade; we can take a blank canvas and turn it into a beautiful painting.

But more often than not, we can’t change something into something it’s not meant to be.

Sometimes, a rock is just a rock. Nothing more. Nothing less. Just a rock. And no amount of wishing, manipulating, forcing. or hoping can change that.

Knowing this can help save a lot of energy that gets wasted on frustration and sadness.

The rocks hadn’t changed—not one bit. My perception of them had. The feelings they evoked and the moment I had in Santorini simply passed. I was stuck between wanting to hold on and having to let go.

We often try so hard to hold onto something from the past that we miss what’s right in front of us, in the present.

I remember when I had the realization that one of my oldest and closest friendships was falling apart. There were many reasons for this split, but ultimately I think it came down to the both of us not seeing each other for who we were in the moment.

We kept trying to squeeze each other into the roles of who we were when we first crossed paths years and years ago.

We put this pressure on ourselves too. We attempt to perfect a million things, instead of just acknowledging our weaknesses and strengths and working with them.

We rarely accept who we are in the present because we are so consumed thinking of who we want to be in the future—or remembering a younger version of ourselves.

I don’t know what just now made me remember those rocks from Santorini—the ones I didn’t put on a pretty display—but I am glad I did.

I am grateful for the reminder that we need to accept things or situations for what they are and people for who they are. When we stop looking at everything the way we want to see it, and start seeing it simply as it is, life flows much more smoothly.

After all, it’s better to let things and people shine where and how they are meant to.

Angie received her M.F.A in Creative Non-Fiction from Emerson College. She currently teaches college writing. When she’s not teaching, she enjoys traveling, cooking and writing—especially her inspirational, positivity-packed, sometimes humorous, always lighthearted blog. For more inspiration, you can follow her on Twitter and Instagram.

Calmness Is Contagious, Even If You’re Faking It

How to ROCK Your Rock Bottom and Reinvent Yourself

5 Questions That Will Help You Focus On What Matters