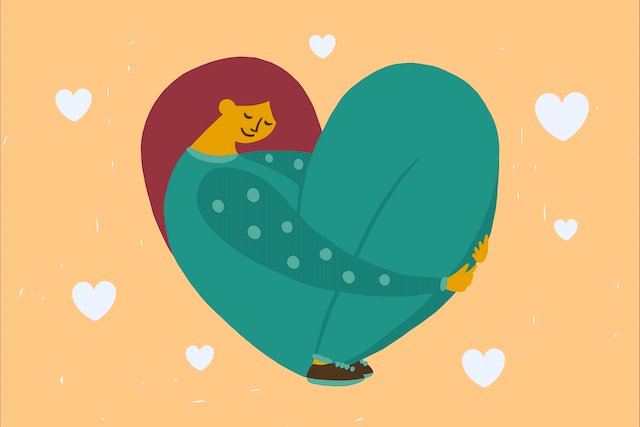 If we all pause for a moment and observe what we are fighting, right here and right now—maybe depression, anxiety, weight gain, low self-image, or financial stress—we’ll have an opportunity to accept then.

But that’s just the start.

Recently I accepted something I never thought I would. Reframing the way I thought about it changed my life.

I have moderate to severe OCD. Having OCD is basically like believing everything that goes through your mind. Scary, right?

Obsessive-compulsive people have intrusive and extremely terrifying thoughts—for example, that he or she may have been contaminated by something, which might lead him or her to spend hours washing. I have a base underlying all of my obsessions: that I will hurt people. It was and can be my greatest fear.

For example, I used to worry that I left the oven or iron on and that, in doing so, I may have burned the house down, which would ruin my husband’s life and also kill our cat. So I’d return home multiple times per day to check these appliances and also send my husband home to check. I also had massive rituals around shutting appliances off.

OCD is a time-sucker. Obsessive compulsives create rituals to lower the anxiety. I’d check to make sure I didn’t leave the iron on, do everything evenly on both sides of my body so I felt “balanced,” retrace events that happened in my life to make absolutely certain I hadn’t harmed anyone accidentally, and search the internet excessively for answers.

These rituals literally took up hours my day.

I discovered that I had OCD one afternoon when I was trying to figure out how you know something for certain.

The first thing that popped up for my search query was about obsessive-compulsive disorder. I felt immediate relief.

I leveraged my OCD to my advantage and feverishly searched for the best treatment for this disorder. I discovered Exposure Response Prevention. It’s apparently the only game in town for this type of disorder, and luckily for me, Philadelphia houses one of the best treatment facilities in the world for OCD.

Now, my OCD is fully in remission, with no medications.

This means I don’t suffer severe anxiety at all anymore. I don’t ritualize. I don’t waste hours of my day checking on things. And most importantly, I rarely pay any attention to the thoughts that float through my beautifully complex brain.

Once I completed the ERP, my OCD immediately went into remission. I was a diligent student, due mostly to how limited my life had become because of my anxiety.

After the treatment, my anxiety had lifted. I felt like a member of society for the first time in my life.

But after about six months of freedom, something funny happened: I decided I didn’t like having OCD anymore. I wanted that label off my back. But really, I didn’t like the upkeep of remission.

Anxiety sucks, and the treatment proposes that you habituate to the anxiety by just sitting with it. No deep breathing. No chemicals to relax the mind. Just straight-up anxiety.

Anxiety naturally wears off. It’s not possible for the human body to remain in an anxious state forever. And the human body is so amazing that we don’t need to do anything to make it go away.

But, in order to get through the anxiety, you must experience it. I didn’t want to do that. I liked having my little rituals to deal with life.

So I un-accepted my limitation. Just like that. The mind is a beautiful mechanism, really. I still find it so incredible that changing one’s mind can have such wild repercussions.

I decided to listen to my brain once again—to take the bait. I began fearing that I was a horrible employee, so I checked my email around the clock. I began believing that I was a bad wife and daughter, so the rituals around that came back with a vengeance. I began returning home to check on the iron. Basically, most of the symptoms and rituals were in full play.

I had to go back for treatment. In that second round, I made a resolution to myself that I will always accept that I have it. And that it will most likely never go away.

I still cringed at the thought of having OCD. Let’s face it, nobody wants to answer a series of questions by a shrink and then actually fit the profile of some well-known mental illness. But a mentor helped me see things differently.

You might have thought the woman suggested I run through Rittenhouse Square stark naked. I was appalled! But in that instant, something shifted.

Her suggestion to look at a flaw as a quirky was revolutionary. A good perspective. A new perspective.

I began to refer to my OCD as one of my cute and quirky little additions to my personality. A nifty little surprise to the totality of my being. Something changed.

Acceptance doesn’t have to mean surrendering to something bad. In fact, accepting the bad part of anything can only take you so far.

What if you began to look for the silver lining and accept that part? Let’s say you struggle with depression. Studies show that people with depression may, and probably will, experience depression many times during their lives. So, just getting out of the woods once is good, but it may come back again.

I think a lot of the time people get through something and say, “I will never go through that again.”

And then, when a smidge of depression creeps in, the person may try to run from it. Begin to fear it. And try to “shake it off.” This is a really negative way to deal with something. Instead, what if you just said, “Oh, here we go. I see you. You are back. I can handle this.”

Instead of running, welcome it back with open arms.

It sort of deflates the whole thing. It’s like a “whomp, whomp….”

When the depression, anxiety, or whatever shows up again, can you see it as an old friend who needs a little TLC?

Can you acknowledge that because of this struggle, you are able to experience many emotions that many other people cannot? Can you find the hidden benefits in your cross to bear?

I have this belief that people who have struggled with extreme lows can experience a deeper sense of joy than most people because they have known the depths of despair.

Aron Ralston amputated his own arm in a hiking accident. He said he viewed the experience as a part of his life’s purpose, part of his soul moving forward. Suddenly, accepting my OCD seems trivial. (But still cute.)

We can become so victimized by negative circumstances that we fail to see the gift that is right in front of us. As a writer, dreamer, and visionary, having this extra quirk can really add fuel to my fire. I am eager and ready for anyone who is done half-accepting or un-accepting something to join me in this new type of acceptance.

What limitation are you ready to flip on its head and accept—as a spice that just makes your soup taste that much richer?

Alison Hummel is the founder of thedreamadventure.com and lives in Philadelphia, PA with her husband, Jon, their son Cash and their cat, Kittie. She is dedicated to pursuing her own dreams and encouraging others to pursue theirs.