Adapting to Feeling Unseen: How I’m Navigating a World That Overlooks the Aging
By Jan DeBlieu 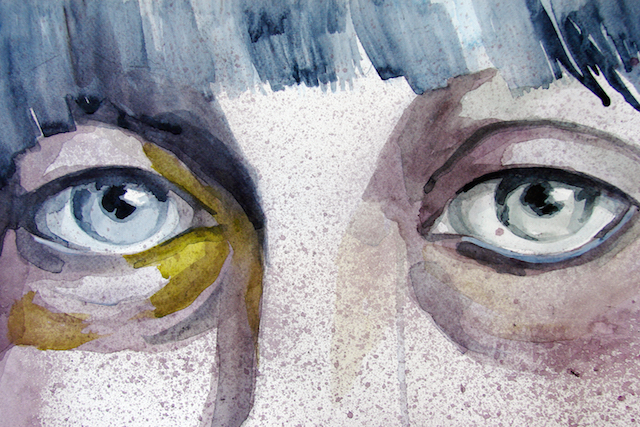 Older
Beautiful inside and out—
Invisible

I gave a little start when those words flashed onto the screen during a presentation by the poet Elizabeth Bradfield. Liz was in the process of describing six-word memoirs, modeled on Hemingway’s heartbreaking story For sale: Baby shoes. Never used.

The photograph showed a wall from the 6 Words Minneapolis project, in which city residents were asked to briefly describe themselves. This entry spoke directly to an experience I’d been having of late but hadn’t quite been able to name.

Consider: I smile at a young couple who are walking with their baby out of the grocery store as I enter. Their eyes flit briefly over my face and body without expression.

Waiting in a loose group of people for service at a food truck—there doesn’t seem to be a line—the fellow taking orders looks straight at me and then asks the guy in back of me what he’d like.

In a park a young couple finishes a photo shoot for their engagement pictures and walk toward me on a narrow gravel path. I smile and say, “Beautiful day.” They squint and pass by as if they’ve heard a noise but can’t place what it might be.

Every time this happens, it shocks me. I’m not that old! A little wrinkled, yes, but not even close to elderly.

True, I can’t know exactly what was going on in each of these instances. Maybe the couple with the baby were in the middle of an argument. Maybe the man behind me at the food truck had somehow gotten there first. The couple in the park—that one’s hard to explain away. I was right in front of them. But maybe they didn’t hear me.

Still, this kind of thing happens to me a lot now, and I’ve got to think it’s because as a somewhat older woman, people routinely overlook me.

I guess I have no right to be surprised, because at a younger age I behaved exactly the same way. Working for newspapers in my twenties, I counted myself among the young reporters who were (we flattered ourselves) the only ones doing cutting-edge journalism.

We paid scant attention to articles by our colleagues older than forty—who, I realize now, had a great deal they could have taught us. The same was true in my thirties and even forties when I was a freelance writer. Like many of my contemporaries, I wished the old fogeys would get out of the way and give us youngsters room to forge new ground.

I should have seen this coming.

Still, my new membership in society’s invisible masses comes as a shock. While I don’t have any studies to back this up, I suspect that older women are overlooked more frequently than older men. No surprise there. But am I overreacting?

On a subway one day Jeff, my guy, nudges me and nods toward two gray-haired women who stand hanging onto a pole, deep in conversation. There’s something about them—their stances, their passion as they talk—that exudes strength.

“Are they invisible?” he asks. He’s been skeptical of my complaints and insistent that lots of women older than me are anything but unseen. I have to admit: He’s got a point with these two. I can’t hear their conversation, but I’d bet they’re talking about something important, maybe a social issue that they feel passionately about. I wonder how I can get some of what they’ve got. Whatever it is, I want it.

Or maybe I already have it. While aging has made me a little less sure of myself in some ways, I trust my instincts more, and I’m much more grounded in my beliefs. I’m more aware of what’s going on around me. I wouldn’t make the same dumb mistakes I might have made at the height of my sex appeal—say, walking into a dark alley with a man I didn’t know well because I was too polite to object.

I can take solace in the fact that older women have a more vibrant role in society than ever before. Look at the number of women in Congress who are over seventy. Many writers, artists, and actresses continue to work into their seventies and eighties, even their nineties. I don’t have to quietly fade away unless I choose to. And something tells me I won’t.

I wish I could meet the woman who penned that six-word story. There’s a lot more to it than the word “invisible,” and I find myself nodding my head each time I reread it.

Yes, I’m beautiful now inside and out, in a way I’ve never been before. I’m calmer and more forgiving of those around me, and of myself. I’m better at not getting dragged into the drama of others’ lives. I often say I wouldn’t trade this body for my twenty-year-old self unless I could retain all the lessons life has taught me. Beauty without wisdom holds no appeal.

In recent years I’ve tried to move a bit more humbly through the world, letting others go before me. Watching and loving, rather than taking control.

I think back to the times in junior high and high school when I did everything possible to blend in, mostly from an insecurity I no longer feel. There’s a freedom to being unremarkable, I suppose. It just never occurred to me that as I aged, this role would be handed to me, rather than chosen by me.

Even if society’s default mode is to relegate me to the background, I still have plenty of options. I can find ways to push myself forward—like I did last week at a seminar, when a well-known horticulturist dismissed me after I’d said hello to him. He smiled at me and turned to greet the older man beside me.

“I have a question,” I announced firmly, which brought the horticulturist up short and his attention graciously back to me.

Or, depending on my mood, I can settle for the contentment that I’ve earned. I’ve fought on the front lines in plenty of battles. I’ll probably insert myself into a few more before my days here are through.

To my surprise, though, most of the time now I find that I’m happy for someone else to steer this starship. This goes hand-in-glove with one of the lessons that keeps getting thrown at me: Acceptance of what life presents me with—and forgiveness of those who overlook me—is a lot easier than fighting things I have no chance of changing.

Back here I can quietly take stock of each new situation. I more readily notice people like me and other overlooked folks. What can they teach me? Calmer, quieter, and no longer constantly seeking the spotlight, I find I have nothing to prove. I can simply be. Isn’t this peacefulness what I longed for in my earlier years? How can I use it now to do the kinds of things I couldn’t accomplish with energy and verve in my younger life?

This is my heart’s new work—part of it, anyway. The rest is encompassed in my own six-word story:

Jan DeBlieu is the author of four books about landscape and how the places where we live and work help shape who we are. Since the death of her son in 2009 she has focused on serving people in need or trouble. She has published articles in many national magazines and has won a national literary medal. Visit her at jandeblieu.com.

How to Cope with the Fear of Aging

To the Expectant Mom with a Million Questions and Worries