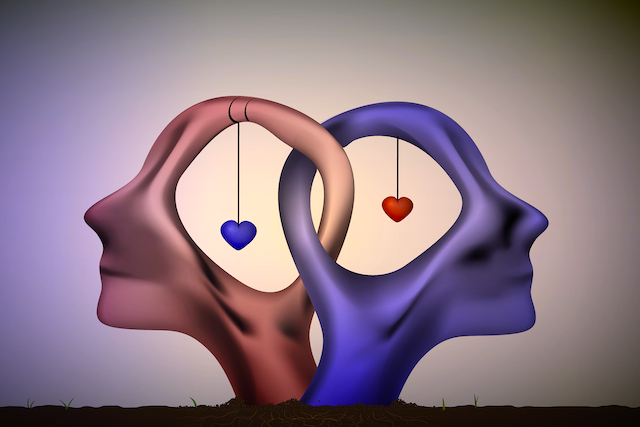 “People will never know how far a little kindness can go. You just may start a chain reaction.” ~Rachel Joy Scott

One afternoon a while back, after stepping onboard to a full train car with no available seats, I situated myself in the standing section.

A couple of stops later, two passengers vacated their seats, allowing me the chance to sit. I embraced the opportunity to people-watch. The woman in front of me began chapter four of her book, titled How to Jump for Your Life. The girl next to her alternated between the Tinder app and a school report. A little dog ruffed from the black duffel bag on the lap of the woman across the aisle from me.

One minute I was staring down at my iPhone screen—earphones in, listening to a podcast. The next I was looking up to a group of teenagers yelling at a middle-aged man. The man was seated next to his bike in the bike section. I didn’t see what he’d done to provoke them.

Their voices grew louder. Removing my earphones, I watched as the man stood up, chest puffed out. Barely an inch of space separated his face from the younger man’s. His opponent bridged this distance by stepping closer and punching him square in the eye. The older man hit back.

As the spat escalated into a physical altercation, each hit delivered with more force than the last, passengers (myself included) watched incredulously. Headlines broadcasting the recent senseless murder of Nia Wilson on BART (Bay Area Rapid Transit) flashed through my mind, and I wondered if one of these men would pull out a weapon.

I wondered how long they would fight for, and I wondered what would put an end to it. Was there anything we witnesses could or should do (and if so, what?)—or were we just captive audiences to the violent scene occurring in front of us?

Visibly shaken, and with tears in her eyes, a woman passenger with dark curly hair, who looked to be in her early thirties, got up from her seat. “Stop. STOP!” she yelled, her voice at once insistent and pleading.

About twenty seconds later the train came to its next stop, and the teenage boy and his group of friends ran off. The older man with the bike stayed behind—left side of his face twitching, injured eye watering heavily (he seemed unable to keep it open).

Though I’d witnessed violence like this on television, this was the first time I’d been so close to actual, real-life physical aggression. That the fight had occurred between real people rather than actors— powered by raw anger and heightened emotions—and that it hadn’t been manufactured for audiences to consume from behind a screen both jarred and disturbed me.

Still, the initial collective response seemed no different than had we all just watched a scene from Orange is the New Black together.

Some BART riders put their earphones back in. Others appeared minimally affected, yet still somewhat removed and distanced from the spectacle. Almost everyone remained seated.

Everyone except for one woman—the one who had been noticeably shaken by the altercation. The one who had cried and pleaded with the two men to stop.

This woman marched over to the intercom and reported the assault to the station agent, asking that he please send a person to attend to the injured man. She then sat with the man, allowing him to use her phone to provide his information to the police.

Once he hung up and handed her phone back to her, I felt suddenly compelled to leave my seat. The woman’s actions had emboldened me to push past my apprehensions. After getting up, I approached and offered the man some water to wash out his eye with.

And then I watched as other people followed suit.

One woman handed him eye-drops. Another conjured towelettes with disinfectant from her bag. A third offered Ibuprofen.

I observed, and felt calmed by, the prosocial Domino effect playing out in front of me. And the precipitator of it—that woman in her thirties with the dark curly hair—stayed in my mind for a long time after.

Since then, I’ve reflected a lot on the initial collective response. I don’t think it’s specific to our time; our desensitization in the presence of large groups of strangers is nothing new, as much as we might like to blame it on the disconnection from one another that technology has engendered.

What came to mind was the bystander effect, “a social psychological phenomenon in which individuals are less likely to offer help to a victim when other people are present” (Wikipedia). In short, according to this theory, the more people there are, the less likely it is that any one of them will step forward to help in a given situation.

One of the most famous examples of the bystander effect took place in 1964 Queens New York, when Kitty Genovese was brutally stabbed, sexually assaulted, and left to die while returning home from work on foot at 3 am. The New York Times reported that thirty-eight witnesses watched the stabbings and did not try to intervene. They did not call the police until the assailant was gone and Genovese had already passed away.

It’s disconcerting to read what the worst-case scenario of bystander effect can lead to, but at the same time I think we can glean a hopeful message from it. I think we can use it as evidence that any one of us may take it upon ourselves to model responsible, prosocial behavior for one another.

I think a lot of times people shut down and check out when they don’t see a way to be useful or help the situation. To me, it’s comforting to know that all it takes is one person to get the helping momentum going, though.

One person can drag us out of this paralysis by leading by example, perhaps motivating others to be that initial precipitator in a future scenario—the one who steps up and steps in, encouraging others to follow their lead.

Imagine what the world would be like if we all did just that?