An Ode to Solitude: The Beauty of Just Sitting
By Gabriela Maya Bernadett 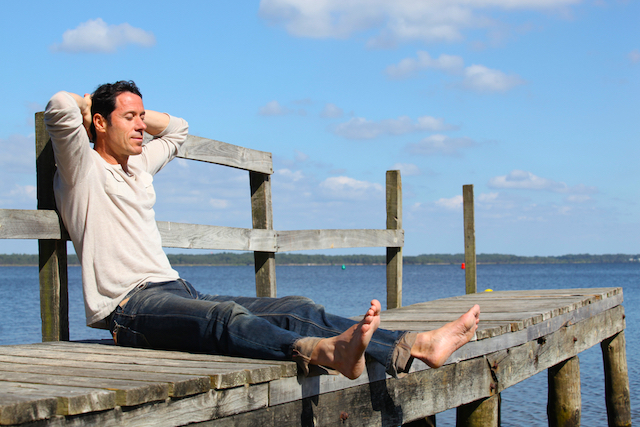 “I never found a companion that was so companionable as solitude.” ~Henry David Thoreau

Meditation makes you realize it’s not so much the silence as it is the not being around people that’s so profound. No human interaction, a human break if you will, is its own simple kind of joy.

Who knew that as a species who can’t function without the social ties of community, it is solitude that re-charges us and gives us the strength to go out into the big, bad world and interact with that lovely mess I like to call humanity?

In our hyper connected, overworked, extroverted, always-on-the-go American culture, the very idea of solitude can seem anathema to what we as Americans hold dear. The mere possibility that a person would skip out on social gatherings or not respond to work emails on the weekends because they want some alone time seems downright un-American.

For most of my life I was (and still am, I admit) a quintessential “busy person.” I pretty much came out of the womb with a list of things on my to-do-list, and as I got older that to-do list became longer… and longer… and longer….

But that was the way I liked it. Each time I ticked off a box I’d get a sense of satisfaction, a rush not unlike I imagine one feels after doing a line of cocaine or popping some ecstasy tablets. And, as with most drugs, once the satisfaction of accomplishing something on my list wore off, I would work on accomplishing the next thing, chasing that next rush, and so on and so forth, ad infinitum.

I made the drug comparison purposely, because the constant need to be doing something can feel like an addiction if taken to the extreme. After each line on my to-do-list was checked off I couldn’t wait to add ten more things.

And, not surprisingly, my incessant busyness was reinforced at every turn. It encouraged me to get good grades and load up on the extra-curriculars in high school, which in turn helped me get into an ivy league school for college, which then helped me get into a highly competitive medical school program… you get the gist.

But once in medical school I kind of reached a breaking point and realized this treadmill life where I never gave myself a break was not sustainable.

It was fitting then, that around this time I started to learn about meditation. I find it ironic that in the hyper competitive, fishbowl of an existence that is medical school I found the one thing that advocated the exact opposite.

Once I started going to meditation classes and getting better at being in the present moment, I began to gain some introspection, which made me rethink this whole busyness thing.

I actually started to worry a bit about my poor little restless soul and wondered if this is what it was going to be like for the rest of my life. This constant need to fill my days with something—anything—so I wouldn’t have to face the vast emptiness of doing… well, absolutely nothing. It was unfathomable to me.

Living alone, however, made me change my perspective. As I got older and could afford to live without roommates, this whole world of solitude opened up.

At first it was terrifying. As busy as I am, even I couldn’t fill every second of my waking days, so the restlessness grew stronger and stronger, until I thought I might explode.

But once I got past this obsessive need to always be doing something, I loved it. I could just sit, literally. I started to feel like I had all the time in the world.

A recent Pew Research Center survey asked: How important is it to you to have times when you are completely alone, away from anyone else? My answer: as important as being around people.

In all my reverence for solitude, the fundamental truth is that solitude vs. sociability doesn’t have to be an either-or equation. They are both necessary if one wants to be a healthy, functioning adult. It’s just that we as Americans have way more of the sociability than the solitude.

A wise person once said, “Don’t just do something, sit there.” So take some time out of your busy schedule each day to just be.

No computer, no phone, no Internet, no TV, no music, no reading, no talking. Just you and your own crazy thoughts.

Though it may be terrifying at first, you might be surprised at what you find lurking in the deepest corners of your mind. Peace, joy, forgiveness, clarity? There’s only one way to find out.

Gabriela Maya Bernadett is originally from Oakland, CA. She graduated from Yale University in 2008 with a degree in the History of Science/History of Medicine and went to Icahn School of Medicine at Mt. Sinai. A proud medical school drop-out, she is currently working in the field of higher education at the University of Arizona in Tucson, AZ. She is an aspiring writer.

The Key to Loving Yourself, Other People, and Life

Balancing Social Time and Solitude: How to Find Your Golden Ratio