Are You Running Away from Yourself?
By Amyra Mah 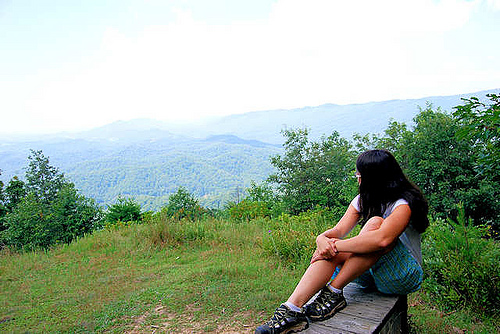 “No matter where you go, there you are.” ~Confucius

I am accustomed to not moving. To move was to feel pain—the pain of seeing how worthless I believed myself to be. Sometimes I would sit in the same place for hours, sometimes not leaving the house for days.

By isolating myself, I avoided finding evidence in the outside world that proved how I saw myself was the absolute truth.

My worst nightmare was that others would show me (through what they said or didn’t say, or what they did or didn’t do) that they too found me as rotten as I knew myself to be.

And so, I was often left in the privacy of my own dreaded company. My best friends were the little pills that I could rely on to knock me unconscious. I had neither the tolerance nor strength to face myself, and I often chose the easy way out.

Sedatives, tranquilizers, hypnotics—I lived for them. They provided me respite from the constant agony of my internal voice, which asked, “What’s wrong with me? Why am I so damaged? Why do I hate myself? What have I done to deserve this?” And concluded, “I don’t want to feel again.”

Sleeping was my only escape. And I did more and more of it.

Sometimes I pushed the boundary too far: Like the time when I swallowed enough hypnotics to probably kill a few buffalos. When I simply woke up a few hours later asking for coffee, I lost interest in testing myself that way again.

But when I started realizing I was losing chunks of memory, I knew I had reached my limit. I would bump into people on the street who talked about a party I was at and I had no memory of ever being there, nor the few days surrounding the event.

After deciding to give up making myself unconscious and not moving, I went to the other extreme of moving too fast. I started taking stimulants—various amphetamine-based pills that would kick my body and mind into action so I could move, talk, and think at lightning speed.

I figured if I kept moving, I wouldn’t have to face myself.

I was running away from the same problem, and I thought I had found a better way of doing it.

It helped me manage my social phobia. Whenever I went to a social event, I felt tremendous pressure to appear perfect. Every meeting, every interaction I had with people, was a performance.

My drugs helped me seem more comfortable in my skin than I really was. I felt false and I hated myself for it.

I tried to exude confidence and charm. Many times, I succeeded. But always, I would spend the ensuing days beating myself up for every little incident I imagined had exposed the rotten me to the world.

I began to feel the rage that had been suppressed in me for a long time. Somehow, it didn’t frighten me the way my other emotions did, so I took refuge in it. After suppressing my emotions for so long, I found it quite empowering to act out my aggression.

It gave me a sense of power I never had. Now I can see that it’s something I call “false power”—a false sense of power that’s followed by feeling bad or dissatisfied with ourselves because it comes from a place of fear.

Soon, I was back to sleeping pills, and alternating them with stimulants—one countering the after-effects of the other. I was addicted to both not moving and moving too fast.

One day, it began to dawn on me that somewhere in the middle, between not moving and moving too fast, there’s a whole world of magical possibilities.

I started to get glimpses into this world.

Whereas my options before were limited to the world I saw myself to be trapped in, suddenly it occurred to me that maybe there was another place to look for the joys that had eluded me all those years.

This was followed by more years of trying to find an easy access into this other world within the same world. I dabbled in a variety of spiritual practices, meditation, energy healing, and slower movements, but lacked the patience to persist when no immediate door was opened.

Yoga was too slow, Pilates too brutal, meditation too boring. I judged everything harshly.

Some things were too wacky, others were not wacky enough. It reflected my mind, which had been swinging like a pendulum from one extreme to the other, struggling to come to a balance.

But I did not give up. Slowly, what was being revealed to me was beauty. What an alien concept it was, for I had never known beauty in all my life.

I learned that the other side of pain and false power is authentic power.

Paradoxically, the place where I was to find the joys that had been missing in my life was the very place I’d been running from all my life.

When I reconnected to the parts of me that I had lost, it felt like a coming-home. I learned that self-love is when we come home to ourselves. That relationship which I had sought to destroy turned out to be the very thing that would save my life in the end.

What I realize now is that we can get so  overwhelmed by our imperfections that we don’t see any goodness in ourselves.

In this way, we can destroy our relationship with ourselves thinking we are flawed and beyond redemption. But it will only cut us off from the very source of joy, beauty, and love.

I see so many people addicted to substances and external relationships, believing that is where they can find these things. It will only feed into their deep inner insecurity and create more distance from themselves, the true source of joy.

I see so many people, like I once did, choosing to go to sleep and not be present to the everyday experience. I see many others who can’t stop running from one place to the next, thinking they can outrun their problem.

Freedom is found not by sleeping or running away, but by choosing to be awake and staying here long enough for the magic doors to open.

The act of moving—mindfully, with an attitude of embracing life—will take you from feeling stuck with pain to healing that pain. Move slowly and you can taste the rich array of sensations. Move too fast and you’ll miss the gifts contained in the moment.

When you get vulnerable, feel emotions, and stay true to what you are feeling, you liberate yourself from pain.

As you allow the sensations to be in your body, while gently breathing through it, you invite the natural force of change to renew you with its constant movement.

Through years of my own creation of movement therapy, I’ve cultivated a mindset of self-renewal. I am still discovering more and more goodness in me, and every discovery brings me even more joy.

If you haven’t found what you’re looking for, try adjusting the pace with which you live your life and see if you can find that door to magical possibilities.

Amyra Mah is a spiritual coach, intuitive counselor, writer, blogger, and creator of extraordinary treatment programs for addictions and other lifestyle imbalances. She is passionate about guiding people to find their personal power, spiritual meaning, and a profound sense of comfort within, so that they rise to their magnificence. Visit her at www.UnusualWisdom.com