Ask Why: How to Motivate Yourself to Keep Going When Things Get Hard
By Joshua Johnson 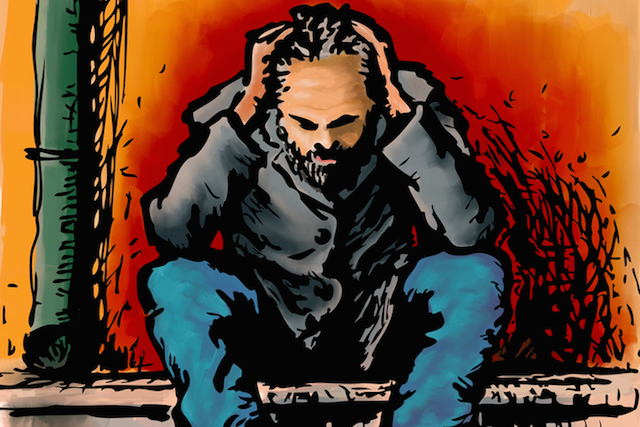 “He who has a why to live for can bear almost any how.” ~Friedrich Nietzsche

My father was an amazing man. I’m sure most sons think that about their fathers, but it’s a belief held by more than just myself. I’m not saying he was a great father, but he was a great man.

He was a Vietnam veteran, a carpenter, and a social paragon in the small town I grew up in. Our neighbors declared him the “Mayor of Bluebank” (the road he lived on.) His funeral was one of the most attended events that our small town in Kentucky had ever held.

Dad believed in working hard, and, true to his word, his health began to sharply decline after having a lung removed (the unfortunate “cure” to lung cancer caused by Agent Orange exposure). He passed away on Veteran’s Day, 2012. A cruel twist of irony.

I had the pleasure of working with my father on many projects, from building homes to cutting staves at a sawmill. I was fortunate to learn what a real work ethic looks like by working with Dad.

Even though Dad isn’t here to give me advice, I still ask myself what he would do when I’m faced with something that seems impossible.

“I feel too tired to work today…”

“Where will I find energy to tackle this project?”

“I don’t know where to start…”

Everyone faces situations that seem impossible at times. It’s an unfortunate lack of grit and resilience that’s common to my generation.

Luckily, I have one invaluable piece of advice that I managed to get from my father before he passed away.

When I was in my late teens and doing irresponsible crap, I once asked my father how he worked so hard. He enjoyed socializing on the weekends, but he seemed to enjoy working his butt off just as much (even with the occasional hangover.) I didn’t understand it.

His response stuck with me. He smiled and told me, “Stop asking how I work so hard, son. Ask me why.” His response was rhetorical; he didn’t want me to actually ask him “why.” His point was that the reason he worked was how he found the energy to work.

Dad’s wisdom didn’t quite click with me until my son was born. I’d always had what I considered an inherited strong work ethic, but it wasn’t truly tested until I was kept up all night for weeks on end with a crying baby.

Babies, a Day Job, and a Side Gig

It can be lonely at 3:34 a.m., especially when you’re awake with a crying newborn. The three minutes and fifty-five seconds it takes to heat four ounces of refrigerated breast milk can seem like an eternity when you want to go back to sleep.

Once I manage to get the boy fed and back to sleep, I crawl into bed to wink before the alarm goes off at 6 a.m. so I can get ready for work. Quietly.

In situations like this, energy at work can seem fleeting. You know your job performance is suffering, but you manage to grit your teeth and get back to it. Somehow. Your shift takes forty hours longer than it used to, but you push through.

To top it off, I write articles in my downtime. That means research, writing, editing, submitting, promoting, etc. Work ethic seems like a stupid thing when the beautiful Siren of Sleep is calling you.

Staying Strong to Get Things Done

All I have to do is ask myself, “Why am I doing this?” when I feel like giving up.

“Why am I working overtime at my day job?” So I can keep the heat on this winter for my family. So I can put food on the table.

“Why am I pushing myself to write another article?” So I can build a business and legacy for my son. So I can spread ideas and wisdom.

“Why am I feeding this thing that causes so much exhaustion and frustration?” Because it’s my son and I love him. I want him to grow up so I can teach him how to be a great person.

Why Is “Why” So Powerful?

Asking the wrong questions can get you stuck. We want to avoid questions that carry negativity.

When you ask yourself why you’re doing something, you tend to attach a larger motivator to your actions. This becomes your motivating reason.

Make sure you have a strong positive emotion attached to your motivating reason. When I ask myself why I’m doing something, it’s always attached to something large and promising, like my family and my future.

A Recent Time When I Needed This Advice

I was reading Smarter Faster Better, by Charles Duhigg, when I came across the following passage (edited for brevity):

Quintanilla had been marching for two days by this point. He had slept less than four hours. His face was numb and his hands were covered with blisters and cuts from carrying water-filled drums across obstacles. […]

“Why are you doing this?” Quintanilla’s pack buddy wheezed at him, lapsing into a call-and-response they had practiced on hikes. When things are at their most miserable, their drill instructors had said, they should ask each other questions that begin with “why.”

“To become a Marine and build a better life for my family,” Quintanilla said.

His wife had given birth a week earlier to a daughter, Zoey. […] If he finished the Crucible, he would see his wife and new child.

If you can link something hard to a choice you care about, it makes the task easier[…] Make a chore into a meaningful decision, and self-motivation will emerge.

My dad’s motivating reason was the same. He worked hard for his family.

Going to work and writing articles with a newborn in the home is difficult, but I wouldn’t say it’s impossible.

For the tasks that truly seem impossible, it’s important to break them into more manageable pieces. If I want to build a business so that I can eventually work from home, I can’t tackle the entire thing at once.

Break your huge project into multiple SMART Goals—goals that are specific, measurable, achievable, realistic, and time-based (even if you have a newborn in the home). Don’t forget to ask why you pursue your “impossible” goal. The bigger the goal, the bigger your motivating reason will need to be.

Check my goals again to see this tagging in action—I work overtime for food and electricity for my fiancé and my son. Not that big of a deal, still a big reason. I work on my articles so that I can grow my business and spread ideas. That’s a big deal to me, and ultimately a larger goal, so I have much larger motivating reasons.

“Efforts and courage are not enough without purpose and direction.” ~John F. Kennedy

Whether you have one purpose or multiple areas of your life that can give you incentives to tackle the impossible, find a reason and hold on to it.

When things are getting too hard to move forward, when the baby is crying and you’re trying to get one more sentence typed out, when your day job seems like Hell and your alarm is the devil, just ask yourself why.

The impossible becomes possible when you break it into manageable pieces and fuel the fire in your belly with a motivating reason. You’ll come out the other side of the “impossible” as a stronger person with more grit and resilience than you ever thought possible.

Josh is a husband, father, and artist with a passion for philosophy and learning. Visit https://www.joshj.blog/links/ for his latest adventures.