Authentic Communication: 3 Tips for Receiving in Conversations
By MK Miller 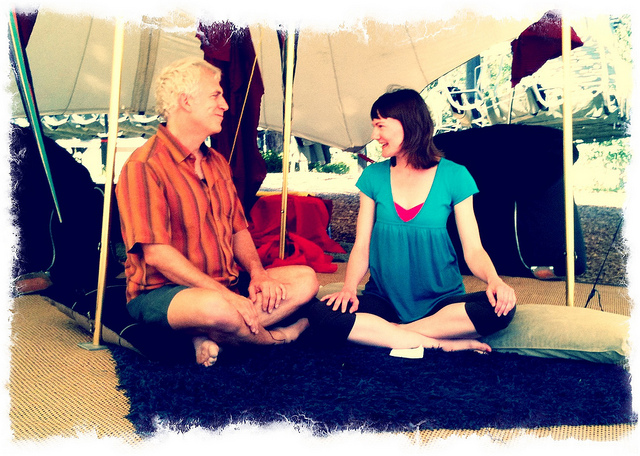 “As for the future, your task is not to foresee it but to enable it.” ~Antoine de Saint-Exupéry

Have you ever heard the expression everyone loves a cheerful giver? While there’s a great deal of truth in the philosophy of offering without hopes attached, what about the flip side?

Sometimes we become so focused on providing antidotes or anticipating what we perceive to be the other person’s needs that we steamroll a conversation, taking center stage in our interactions.

In my own day-to-day life, pauses and hesitations in conversation used to make me uncomfortable or even anxious. I would rush to fill the space with chit chat that meant little, or offer to help that person with a favor—not so much to experience the joy of giving another person a break but to alleviate the unease inside me.

Coming from a place of fear, I frequently dampened the point of the conversation with my desires to keep the talk flowing and elicit the behavior I wanted from others.

As a one-time people pleaser, I knew that there had to be a more peaceful way to connect, and on a deeper level, with those around me.

After I turned thirty, I began to step back and actually give other people room to express their opinions and thoughts—even if it meant several seconds of complete silence, something that previously would have seemed impossible to me.

I found myself breathing more slowly and relaxing more into the moment. I started to feel the same happening to others I interacted with.

As people began opening up to share their true awareness because I was listening more willingly, a beautiful space of appreciation for them opened within myself.

By taking one step back, I’ve frequently been surprised at what the other person decides to share.

For one friend, it was a bad day that I probably otherwise wouldn’t have been as compassionate about because I would have steered the conversation toward my own frustrations.

Then there was the neighbor who began to look across the hedge while we talked, which previously I would have considered a sign of boredom. But suddenly she said, “You know, I think I forgot to thank you last month when I was sick and you wheeled my garbage out to the curb with yours. I appreciated that.”

I’d assumed she’d forgotten or hadn’t noticed that simple good deed. If I had rushed the conversation forward, as I’ve typically done, I would have missed the softening of her features and her moment of acknowledgment, a gift in itself.

When we allow a quiet, neutral space for deep breathing and awareness, suddenly the flow of conversation becomes more natural—a wave upon the shore, ebb and flow, rather than a spiking of blood pressure—and the other person rises to meet us with authenticity.

Wouldn’t we like to inspire the truth of what another person wants to give rather than start a set of reactions that mean less about connection and more about lobbing back a response?

How can we learn to step aside and let someone else have the growth experience of opening up and giving their thoughts a voice?

Don’t rush to fill pauses. Most of what we typically perceive as awkwardness is simply waiting for either ourselves or the other person to consider what to say next. Pauses create space for more honest communication.

Without rushing ahead in your mind, pay attention to the other person’s actual message, in word or deed or body language.

Does the other person have crossed arms? Perhaps this isn’t the best time for them to talk. Conversely, if they have open body posture, you might be just the person they need to talk to today.

Either way, focus on the other person, and reign in the monkey mind that rushes ahead and then backward to last week and then sideways to an after-work grocery list and appointments. In this moment, your only concern should be the other person.

I don’t know about you, but I’ve not yet experienced too many listeners in this world. Truthfully, how many of us can anticipate the true contents of another person’s thoughts without offering that kind of focused attention?

Don’t get me wrong—it would be a disservice to agree with everything someone says or does to please them or to eliminate conflict. But just being heard is a powerful experience that often lessens others’ built-up defenses and helps them feel understood, even if two people don’t quite see eye-to-eye.

3. Know that you are part of the conversation or interaction, but are in no way responsible for directing it.

Grasping for words to elicit a smile or create a certain response can actually drive people further away and promote more insecurity or frustration. Sometimes letting go of a person’s time or energy is actually the healthiest for both parties.

Accept that a conversation or interaction may draw to a swift close, but that doesn’t mean there’s no closure in the experience.

Of course, it’s quite possible that as soon as the other person feels the slackening of your expectations, (s)he will unconsciously begin to speak or act from a deeper, more authentic vantage point.

Either way, let go of a preconceived desire for the other person to react in the way you’d hoped. Receive the other person’s message and realize that within yourself is the ability to take part, to listen, and then to move forward with acceptance, whatever the person’s responses.

When we let go of conversational expectation and stop rushing in to fill pauses, we make room for others to give more of themselves. What we reap in open-hearted listening and a compassionate approach to others often benefits giver and receiver alike.

MK Miller has two degrees and limitless curiosity. She has written about a wide array of topics– including the cultural significance of go-go boots. She rides her bike almost daily, pays bills monthly, and collects books and shoes perennially.

The Art of Conversation: Stop Zoning Out and Waiting to Talk

A Powerful Guide for People-Pleasers (and a Giveaway!)