Be the Hero of Your Story: Make Your Life Count
By Ehren Prudhel 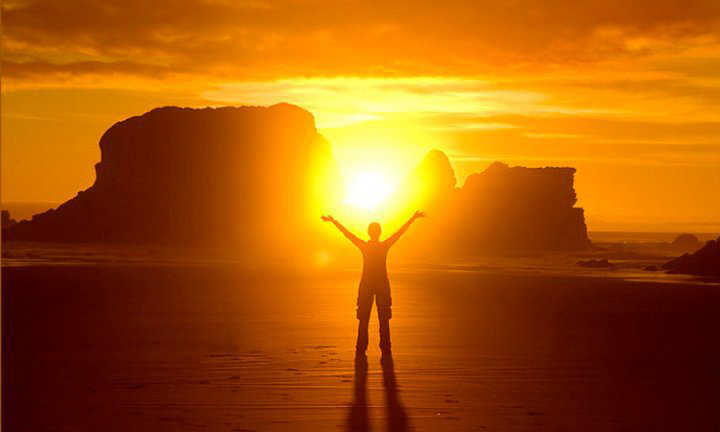 “Bad things do happen; how I respond to them defines my character and the quality of my life. I can choose to sit in perpetual sadness, immobilized by the gravity of my loss, or I can choose to rise from the pain and treasure the most precious gift I have—life itself.” ~Walter Anderson

No, I’m not some sick person who likes getting strip-searched by TSA, or waiting several hours to board a flight that should have arrived at my destination already. I hate that part, but I love the part when the plane takes off, and I especially love the part right before the plane touches down.

During the initial descent the destination becomes clear when you look outside the window. Oh, I love the window seat. Every time without fail, I gaze outside and look at the lights of the houses and buildings as the plane flies by.

Every time a very similar thought comes to my mind: Inside each house there is a person or a family, people experiencing highs and lows, people laughing and crying, people living and people dying.

For some reason this obvious thought is comforting to me. Maybe it’s because it’s proof that although we are all infinitesimal in the grand scheme of things, we are all sharing in a collective human experience.

I think there is meaning in life, which made this plane ride ultimately more difficult than any other, because I was returning home to bury my twenty-seven-year-old brother.

A day after the burial, my father and I met up with some of his close friends to collect my brother’s personal belongings and view the site “where it happened.”

I remember that day so clearly. It was bright and warm for the chilled wintertime in northern California. It wasn’t the type of day you’d expect for death; it was as if the weather didn’t care.

People asked me why it was so important that I know how it happened.

I tried to explain that I just wanted some answers, but a common response was that “knowing” wouldn’t bring him back. Obvious, true, and painful, but I’ve always had a need to know, and I was determined to try and make sense of it and uncover what had happened.

At the site, I went over all of the possibilities in my head as if I were the investigator. Maybe he’d tried to answer his cell phone? Maybe he’d fallen asleep? Maybe the truck had malfunctioned? Maybe? Maybe? Maybe?

I needed to know what had caused the one-ton truck to blow over a power pole and crash forty feet across a water-filled ditch into a dirt embankment, causing the truck to fold like an accordion.

Maybe I needed to know because I have an image in my head of my brother lying helpless in the mangled cabin of that truck, waiting, hoping for someone to come out there and help him.

According to the traffic and police reports, it was almost two hours until someone arrived on scene because he was commuting in the country. In fact, if he hadn’t hit a power pole, and someone hadn’t been unable to watch their midnight TV programming, it may have even been longer till someone got out to the site.

The police report said that my brother was pronounced dead at the time of arrival, but still, my thoughts turn to those unaccounted-for two hours.

Fate. Is there a single force that determines our lives? Maybe there is a higher power that has a plan for all of us? Maybe we have the ability to determine our own destiny? Maybe? Maybe? Maybe?

I don’t find comfort in answers that rely upon faith. I come from the school of doubt. I am not out to discredit anyone’s religion or philosophies on life; on the contrary, I think all can be good if they help each person live a meaningful and responsible life, but there are simply more questions than answers, and I don’t want to base my life on theory.

I am not a pessimistic person—you can ask anyone who knows me—but I instantly discredit everything, even my own ideas. It seems there is some sort of circular logic paradox, where for every idea, there is another idea that counters it. Life is one big paradox.

I’m sorry for the cliché, but this is important. We’ve all heard this phrase before, and we know how it ends: “…and then you die.”

But if you are reading this, you are not dead yet. And if you have felt the way I’ve felt, life does suck.

No sense trying to sugar coat it: sometimes, it just plain sucks. I’m here to tell you that that’s okay. In fact, it’s good that life sometimes sucks—and you’re not dead yet.

I recall the last time I saw my brother alive. Fortunately, I made the decision to take additional time off of work for Thanksgiving instead of Christmas, and got a few additional days with him.

On my Thanksgiving trip back home, we did a lot of our regular activities: We BSed about good times in the past, drank and sang karaoke at our favorite Irish Pub, singing till our throats got sore and then singing some more, and we spent time with our family and friends.

However, this trip home, and this time spent with my brother, was different from any other time.

My brother spent most of his adult life with a large chip on his shoulder. I suppose a lot of people have such chips weighing them down because “life sucks.” This was his attitude.

Not all the time, of course. He had some great times, some amazing moments; I know this because we had them together. But the chip was always there, sometimes just below the surface.

On this last trip home, something was different. We still went out drinking at karaoke, but this time he put me in the cab. This time he picked up the bill. This time his chip had some real passion behind it.

He told me definite plans he had for the future. He had started to seriously date. He had even picked a vocation that he was happy about; he was going to be an electrician, saying to me, “I like working with my hands.”

Make no mistakes about it: my brother had started taking responsibility for his life.

“Life sucks, and then you die” is an incomplete sentence. It’s the wrong side of the paradox to take because meaning in life comes from what we each do. Life just is, and we are all unique artists with the ability to create our own masterpiece. If positive and negative are two sides of a coin, we don’t have to flip it and leave it to chance.

I have often asked myself, if I died right now, how would I feel about my life? The retrospective questions seem to supply the fullest answers.

Regardless, it can be empowering. Life is all we know for certain we have. Say what you will about religious belief and potential other planes of existence. The now is here; living it fully is about believing and having faith in ourselves.

What I saw in my brother that day, for the first time, was a slight shift in attitude that had moved him into action. He’d started to be the hero of his own life story.

Tragic as the brevity of his life is, the real tragedy would have been never making the change. My brother Justin is my inspiration, a source of newfound strength, and a reminder that it is never too late to start a new journey.

During the initial descent, the destination becomes clear when you look out the window. Flying overhead I see the shimmering lights of human experience and I have perspective; when I land, it is up to me to decide what to do.

Ehren Prudhel is the founder and host of Next Creator Up, a podcast that features inspiring and innovative creatives. He's an on-again, off-again creative himself, and co-founder of Tiny Buddha Productions and the popular online course Recreate Your Life Story. In his spare time, he travels, sings enthusiastically off key, and attempts humor. He's better at singing than humor.

What Really Makes Us Happy, and Why

When Everything Goes Wrong: Getting Through One of Those Days