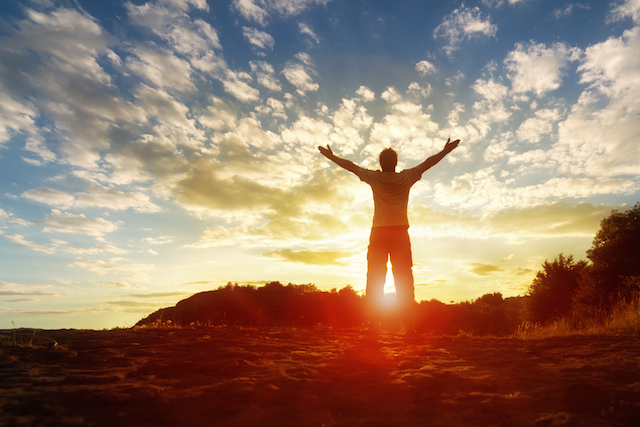 “Think of all the beauty that is still left in and around you and be happy.” ~Anne Frank

At first glance, the happiest person I’ve ever met appeared to be a simple man. There didn’t seem to be anything particularly sophisticated or spiritual about him.

Srulik was five-feet tall, with a big round belly and a wide smile permanently plastered on his face. He enjoyed the small things in life: a good joke, a familiar television show, a wholesome meal. He radiated such joy, and was so unassuming in his demeanor that one would assume he was blessed with an equally simple and joyful life.

Many years ago, when I was only ten years old, I remember coming home one day particularly distraught.

My class had just learned about the Nazi Holocaust. At the sink, my mother was washing dishes. I started telling her about what I’d learned in school, when she gently cut me off and, in a matter-of-fact kind of way, said, “Oh, your grandfather is a survivor. You should talk to him about it.”

“Grandpa Srulik,” she answered as she continued scrubbing a pot.

I was flabbergasted. What? Him of all people? How could that be? He is always so happy. It just didn’t make any sense.

I was only a child, and yet I could feel that something out of the ordinary was happening here.

Later I learned that, indeed, volumes of psychological research confirms that a difficult past leads to a difficult future.

No need to go as far as the Holocaust. Common problems we suffer in times of peace and plenty, such as bullying and poor attachment to our parents, can have serious psychological consequences, preventing us from enjoying our lives many years after the problems go away.

Veterans often suffer from severe post-traumatic stress, and Holocaust survivors in particular are known to suffer from a wide array of emotional problems after the unspeakable horrors that they suffered. Who would expect anything else?

And yet, there was my grandfather, happy as ever—smiling, telling jokes, and laughing his heart out. I had to know what enabled him to survive so wholly.

“How do you manage to stay so happy?” I said during one of our conversations.

“You need to learn to be happy from any success,” he told me. “Any success at all. When some misfortune happens, we need to view it with humor and think of it as temporary. Think of something else.”

“I view everything with optimism, it’s very important,” he added later.

His secrets boiled down to gratitude, the power of positive thinking, and optimism. I must admit, I have heard it all before. But, suddenly I saw it in a whole new way. Can things such as gratitude and optimism help us overcome even the most tragic of traumas? How powerful are these principles?

When Grandpa Srulik was ten years old, the Nazis came into the Polish town of Nowosiolki, and gathered up his family—the only Jewish family in town.

With the entire town watching, a Nazi pushed Srulik’s father against the brick wall of his house. Then, the Nazi grabbed hold of his mother and pushed her hard against the wall. Next, he did the same to his brother.

Realizing that he was next, Srulik picked up his heals and ran as fast as he could through the thick crowd surrounding his house. Behind the river across from his house, he suddenly realized that he was alone. He had escaped the Nazis. He decided to hide in the bushed until morning before returning home.

The next morning, Srulik overheard three women doing laundry in the river. This is when he learned that, the previous night, his mother, father, and brother were shot dead into a hole in the ground. Devastated, utterly alone, and on the run from a powerful enemy, he tearfully mourned their loss.

Yet through this pain, he never lost hope. He shared with me that even in that terrible moment, he believed with all of his heart that he would find a way through this challenge, monumental as it was.

But, things got worse before they got better. Several weeks later, Srulik was discovered and imprisoned in a Nazi ghetto.

There, he saw Nazis throwing live infants against walls and witnessed the murder of thousands of innocent people every day. He nearly died from starvation and disease, and narrowly escaped the Nazis’ bullets on numerous occasions.

Against all odds, optimism carried Srulik through this unimaginable horror. Every day, he told himself that the Nazis would be defeated and he would be free.

Through the years he spent running and hiding from the Nazis, Srulik never forgot to be grateful for the small rays of light that lit his path.

He recalled with delight the wonderful homemade pickles that a young Polish woman gave with him when he had nothing. He never forgot the kindness of a German cook, who, instead of reporting him to the authorities, shared his delicious soup.

Srulik held onto his positive attitude for years after the war. He was grateful for all the kind people he had met along the way, the orphanage that took him in, and the opportunities he had to earn an education.

Until his last day, Grandpa was able to find something positive in every situation. “Even good weather counts,” he taught me.

Despite an incredibly difficult past, Srulik grew up to be a joyful, contagiously positive man. Having had the most difficult past of anyone I’d ever known, my grandpa was, and still is, without a shred of doubt, the happiest person I’ve ever met.

If gratitude, positive thinking, and optimism helped him lead a happy life, then imagine what these principles can do for the rest of us. Surely, there is hope for all of us, no matter what lies in our past.

Margareta Ackerman, PhD. is a granddaughter of Holocaust survivor Srulik Ackerman and author of his inspiring memoir Running from Giants: The Holocaust Through the Eyes of a Child. She also authored over a dozen academic publications, including research on applications of traditional Jewish study methodology to the modern classroom.