Creating Change by Leveraging the Power of Intention
By Alexander Dunlop 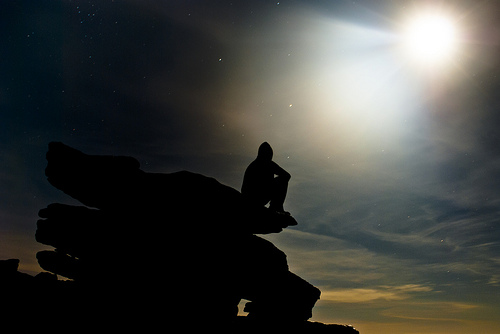 I got divorced a few years ago. It wasn’t pretty. We started out saying it would all happen amicably.

But we owned a business together. How much the business was worth at separation, we each contested. It dragged out. We finally got it done with after much pain and suffering.

And it just confirmed what I believed: Where money is involved, things get ugly.

I remember while I was living in Spain, it happened then too. I was living with a group of men and women who were working for social justice in a poor community. I was there as a recent graduate from the Jesuit Seminary, helping out at the summer programs for kids.

We lived simply and ate simple meals. I chipped in where I could for food. I kept offering to give more toward the groceries and other household expenses, but they politely declined.

After the summer program for kids was over, I set out to backpack around Spain.

In Toledo, famous for its sword making, I bought my dad his birthday present—a finely made full-size replica the King of Spain used to hold in ceremony. It cost about the equivalent of $100. My father had given me some money to travel with as a graduation present. So, I wanted to bring him back a nice gift from Spain.

I returned to the little community in Madrid where I was living. As soon as they saw the sword, they wanted to know how much it cost. It was immediately divisive. Their entire attitude toward me shifted.

They suddenly demanded I pay rent for the entire time I was there, even while I was away backpacking. They told me that the suitcase I left with them was taking up too much space and I should pay rent for that also. The situation was tense.

I left for a daytrip towards the last days of my stay there and when I returned, they had turned out the lights and locked the door on me. It wasn’t pretty.

That was 13 years ago. But, like I said, I’d noticed a pattern. Where money is involved, things turn ugly. That’s the reality I told myself.

And that could have been the final word, the fatalistic view, to realize that’s the way it is: Money makes things turn ugly.

More recently in my life, however, I’ve learned about the power of intention. I’ve learned the reality of the law of attraction, in a way I didn’t know during my divorce.

So, a few months ago, my ex-wife and I started having differences of opinion about child-support payments and other medical expenses for our children. It got to the point that we each separately filed a motion in family court.

And I thought, “Here we go again. When money is involved, it turns ugly.”

But in the back of my mind a new voice said, “Hey, you know about the power of intention. Why don’t you intend a new outcome and attract a new reality?”

As I sat with that new thought, I realized something:  The reason I didn’t want to intend a new reality is because I wanted her to suffer. So, I was willing to endure suffering as well just to spite her. Wow.

That was a biggy. And not one that was pleasant to accept: To realize that I did not want to intend a peaceful, easy relationship with money because I wanted suffering instead.

And I thought back to my childhood and yep, there it was. In my childhood, there was intense suffering and pain around money. I was carrying that same “reality” with me. And guess what: I was unconsciously intending it every time.

I made a decision.

I texted my ex-wife and I said, “Let’s meet and talk in person. This is silly to go to court and waste time and money. Let’s sit down and talk about this.”

She agreed. We picked a time and place.

I was incredibly nervous about meeting with her. My stomach was doing somersaults.

And I realized something else. The reason I had a hard time choosing a good relationship to money is that I was afraid of confronting people about it. So I avoided it. And that led to a buildup of unspoken, divergent assumptions around money.

So, in all, I had two big realizations.

1. I was unconsciously choosing suffering each time around money because that’s what I wanted.

2. I was afraid of any confrontation about money, so I avoided it, which only made the situation worse, and caused more suffering.

I made another decision.

I set my intention to have a wonderful, productive conversation with my ex-wife in which we could come to a mutually agreeable conclusion about our differences.

And I decided that I would show up to the meeting and start off by reminding her of the good times we had together. My intention was that by starting off with that, I would set the tone for the rest of the conversation.

I had a week to set my intentions. And, nervously, throughout the days leading up to our meeting, I continued imagining a good conversation and a good outcome.

I showed up for our meeting at a coffee shop. I was still very nervous. She saw me outside and came right up to me with a smile on her face. I was taken aback. It was not what I expected, based on past conversations.

I honestly didn’t know what to do with it. Her demeanor surprised me.

Taken aback and now a little suspicious of why she was so pleasant, I decided to stick to my game plan.

I told her what I wanted to share with her—how I was grateful for all the good times we had, the ways I grew from the relationship, and the beautiful children we had together.

And then, amazingly, it was smooth sailing in the conversation. Don’t get me wrong, my stomach was still doing cartwheels. But the conversation was going well. She was right there with me in the same intention.

And I thought, “Wow, was my intention that powerful?” My shift in energy contributed to a completely different reality. She was smiling pleasantly.

But, like I said, I almost didn’t even know what to do with it. I was so programmed for pain and suffering around money conversations, that to have a smiling, good conversation felt really weird. I was like a fish out of water. It was a whole new reality for me.

It took an adjustment.

Ultimately, we were able to reach an amicable settlement without going to court, and I almost couldn’t believe it. That’s the power of intention, and the reason why we don’t intend a new reality.

We are pre-programmed to want the familiar reality even if it’s a reality of pain and suffering.

If we want a new reality, we can intend to create something different. While there are other factors that affect the outcomes we experience, our intention is one of the most powerful indicators. But we have to want a new reality.

Now, I have the starting point for a whole new experience of reality, one that I have consciously intended. It’s an ongoing process—fun, scary and liberating all at the same time.

Is there some part of your reality that you’re not happy with? Are you ready to experience something new? What would it look like to shift your intention?

Alexander Dunlop is a Spiritual Life Coach. From an ordinary deck of playing cards, he can layout the blueprint for your life. Discover the life you were born to live. And get the life nourishment you need. www.spiritualnutrition.org

Learn to Love and Accept Yourself, Wherever You Go