The Delusion of Separation: We Don’t Need to Feel So Lonely
By Jon Waterlow 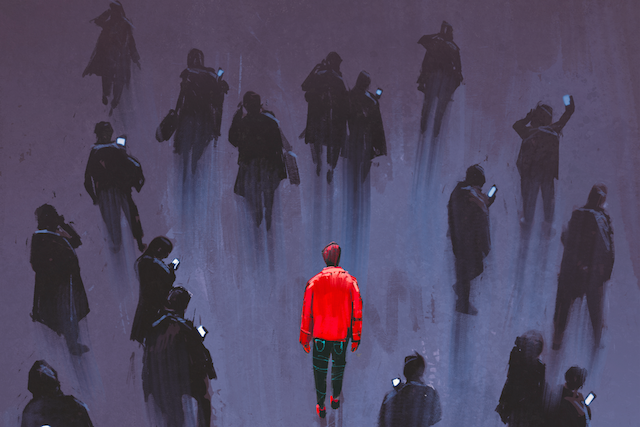 “The fundamental delusion of humanity is to suppose that I am here and you are out there.” ~Yasutani Roshi

You know those moments? Those brief, fleeting moments that shine through the grey of everyday life like motes of glitter caught in a sunbeam. The moments when you suddenly feel a connection to the world around you, when the quotidian alienation of modern life falls away and color pulses back in.

Walking through the torpor of another generic day, the background static of depression distorting the colors of the world, I often don’t realize I’m on a downward spiral until I look up and realize the sun seems a long, long way away.

The spiral staircase in my mind has steps that aren’t just worn smooth from use, but more often than not seem to be lubricated, too. At the bottom, the door marked “suicide” is always standing there, waiting… and how much easier it would be to push it open and walk through, rather than trying to climb back up those endless, slippery steps.

And then, out of nowhere, I lock eyes with another person and, unplanned and unplannable, we see each other.

I don’t mean we just notice one another, or that we look and immediately glance away before continuing our automaton stomping along the street. No, I mean we actually share a moment of mutual recognition: we see each other and share, for a long second or two, something fundamentally human. A connection.

Stereotypes and defence mechanisms flicker, before revealing themselves to be the smokescreen of fear they really are—a hazy distortion field which blurs our vision of what’s right in front of us. A barrier that we hide behind, but which has no more substance than fog.

The mind loves shorthand and shortcuts, but nobody can be accurately reduced to these crude symbols, and nobody really fits into the boxes that we’ve learnt to shove them into to make the complexity of the world more manageable.

“Manageable” is the spreadsheet, not the thing itself. It’s a lens, but like reading glasses, it helps us see something at one level, but distorts everything else if we look up and try to see anything more.

If stereotyping reduces, then these moments of connection distill. The essence rises and we can taste the purity of it. In these moments, looks aren’t deceiving, but revealing.

Recently I was walking across a narrow footbridge over a stream, heading back to the flat I was staying in. Just a few paces ahead of me, a couple of young men in tracksuits are leaning on a railing, chatting quietly. They hear me coming, and one of them looks around, a little tense as his instincts alert him to my approach.

We lock eyes. We don’t smile; we don’t exchange reflex pleasantries. But we both nod slightly and in that small moment wordlessly exchange several deeply human things.

A greeting; an acknowledgement that we see each other going about our day without need to intrude, question, or interfere; that we’re both enjoying the bright, beautiful morning; that there might theoretically be cultural and class divisions between us, but we are not bringing them into this simple interpersonal moment; that, in some ephemeral but weighty sense, we respect each other.

But even that sounds too cold. Because this, like all such moments, is definitely warm. The stranger on the terrace raising a glass to you in silent toast; the knowing look you exchange with a parent trying to control their young children; holding a door for a stranger and sharing a smile, or waving to someone on a distant ship and seeing them raise a hand in return.

These aren’t rituals, politeness, or other rehearsed and mechanical behavior. This is what all the meditation teachers are talking about when they exhort us to be present with what is, rather than the stories we impose on ourselves and the world around us.

It’s a brief mutual knowing, a wink around the corner of the matrix, when you both silently acknowledge the absurdity of the conventions that we live inside.

It’s the barista who doesn’t reel off the heavily scripted line when they pass you your coffee, because in the moment before they do, you see each other and smile, acknowledging in no words at all that the artifice is all pretty silly and you don’t need those lines to appreciate the exchange that’s taking place.

I’m not saying that we’d all become great friends and enjoy each other’s company if we actually got talking. But beyond those layers of accreted cultural, social, and personal compost, there’s a core of shared humanity, which, in these brief moments, we instinctively recognize and feel heartened by. When the zombie apocalypse breaks out, perhaps we will, after all, be able to rely on our fellow humans.

Zombies aside, I’m not being flippant. Disaster movies and the mass media love to scare us with visions of society and basic humanity rapidly collapsing in the face of major disasters.

After Hurricane Katrina, New Orleans was soon portrayed as a terrifying regression to a Hobbesian world of man-as-wolf-to-man, but this was simply untrue. The fears of the government, police, and media became the lenses through which they and then we perceived and approached the situation. The reality was altogether different.

As Rebecca Solnit describes in her fascinating book A Paradise Built in Hell, not only do the vast majority of people not turn savage in the face of disaster, they rapidly begin helping complete strangers, setting up ad hoc shelters, kitchens, search parties, and hospitals.

And the survivors of the natural and manmade disasters Solnit describes, even if they experienced terrible personal losses, they frequently look back on these periods as some of the best in their lives. In large part, this is because they felt that rarest of things in the modern industrialised world: that they had meaningful and consequential things to do.

Why? Because they were suddenly talking and cooperating with other people in the same boat as them, from complete strangers to neighbours they’d never spoken to in twenty years, despite living next door.

It was as though external circumstances triggered a different human mode of operation, back to something more fundamental and less complex.

Studying the same phenomenon, Sebastian Junger calls this a return to tribal existence, but this isn’t a story of reversion to an idealized pre-modern existence. It’s simply the rediscovery of what’s already there: it’s the collapse of the fiction Yastunai Roshi described—the delusion “that I am here and you are out there.”

Don’t get me wrong – there are plenty of times when I find myself actively avoiding any connection with the people around me. When I’m standing on the street, some part of my mind often starts whirring away hoping no one strikes up a conversation with me. What if they want something from me and make me feel bad for not giving it to them? Why can’t I just be left alone to my thoughts?

And yet being closed off to those external inputs isn’t much of a way to think or to live. It is, after all, based on fear. Fear of change, fear of disruption, and fear of a loss of control.

Those fears are simultaneously completely valid and entirely foolish: change is the only constant in life, so there’s no benefit in fearing it. And control is always an illusion and a constraint.

We imagine the moment of interruption as inherently negative, and yet we’ve got no idea what might happen next. Maybe this person simply wants to know the time, or they’re lost, and when we can help them out we end up feeling really good about it.

So far, so nice. And perhaps familiar. But why highlight these little moments, if we all know them?

Because each one seems to come as a surprise, or a slight relief. Because until they do, at least for those of us in big cities, we’re surrounding ourselves with countless Schrödinger’s boxes of uncertainty regarding the people around us. And so we cast our eyes downward, or keep our gaze frictionless when we look at the people around us, avoiding contact for fear of rejection or accusation.

It can feel so much easier not to open the boxes and keep things unknown, but the vertigo of what Pema Chödrön calls “groundlessness”—of leaning into the unknown with heart and mind open—is precisely where life happens.

We must learn to relax with groundlessness—of having no certainties, nothing solid to which we can cling, and no promise our smile will be returned. As Chödrön explains, Buddhism encourages us “to remain open to the present groundless moment, to a direct, unarmored participation with our experience,” with no guarantees at all that everything will work out the way we might want it to.

The trick is not to look for a reaction. Not to expect anything at all (and thereby avoid the ego’s spluttering outrage that this or that person was so damn rude for not returning our smile or greeting). That’s just giving with strings attached.

Instead, moments of connection happen when something is given freely, without the higher functions of the brain coming into play. In the same way we smile at a cute animal or a child laughing, we can remain open to everyone around us, because they are also us, living a different life. There’s no need for “why”; we can just do.

When we act without expectation, there’s no disappointment. Which isn’t to say something nice will definitely happen, but whatever does happen will simply be data—not something weighed in the scales of our prior expectations and found wanting.

For me and many others, depression creates a sense of desperate isolation; it seems to close us off from all connection. But while the sun can seem so far away—a pinprick of light at the top of that spiral staircase—this is just another distortion.

In truth, that light of Bodhichitta—the “awakened heart”—is still inside us and always accessible. Like the idea that we are separate from other people, it’s another delusion to think that we can ever be separated from the heart of Bodhichitta within us.

Being alone isn’t the same as being lonely, and in those fleeting glances and connections we can be both alone and yet deeply connected with the people and the world around us. We just have to be present enough to be open to them.

Jon Waterlow is a writer and podcaster who has trouble staying in one place for very long. You can find him at www.voicesinthedark.world, a podcast dedicated to Learning How To Human. He talks and writes about psychology, philosophy, spirituality, social dynamics, mental health, psychedelics, and more. Check out his free series on The 48 Laws of Power.