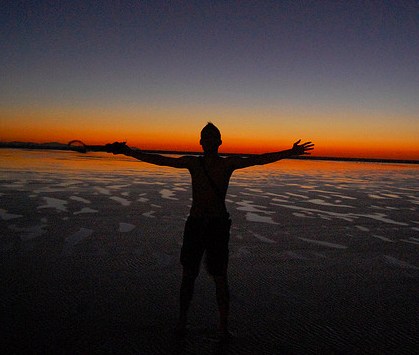 “Just as much as we see in others we have in ourselves.” ~William Hazlitt

As an American living and working abroad in Barcelona with only local Spanish and Catalan television, I often look to the Internet for entertainment when I have downtime. I particularly enjoy looking up songs I’ve heard on the radio.

I recently fell in love with the song We Are Young by the band Fun. I can still relate to this youthful anthem, even as an almost 40-year-old. I am fully aware that I probably just made the band hugely unpopular by admitting this.

This is how I found the acoustic version of another Fun song, Carry On on YouTube. The accompanying instrumental music was simple and pure. And when Nate Ruess opened his mouth to sing, it appeared so effortless and natural, and created sounds so beautiful that it brought tears to my eyes.

I couldn’t believe how emotional I was over watching this young, skinny guy sing!

What struck my emotions so hard? It was the absolute beauty of someone, who looked like an ordinary guy, doing what he obviously loves, so well.

I was completely fascinated to find that Ruess never had formal musical training, couldn’t play an instrument, and pursued a musical career even in the face of being told that he wasn’t good enough and would never make it professionally. But he was, and he did, it appears purely out of true love for music.

Had Nate Ruess been a more practical person, he may have forgone making a life out of his passion and pursued a college education and business or law. Had he done this, the world would have missed out on his incredibly unique musical gift.

I have always stood in awe of people who are able to make their passion a main focus of their life. Many people don’t. And further, many people seem to think that it’s asking too much of life to live one’s passion.

What makes people like Ruess appear so extraordinary is that they believed in their dreams enough to pursue them.

I’ve often thought about other people who have realized their dreams by pursuing their passion or life calling: the Brazilian author Paulo Coelho; my cousin who is a gifted actor and musician; a world-class scientist friend of mine; Mother Teresa; the Buddha.

I realized what they all have in common is that they are just ordinary people who pushed beyond conventional boundaries—and often, great opposition—to lead extraordinary lives. These ordinary-turned-extraordinary people lead lives that are both personally fulfilling and that ultimately benefit their communities or the greater world.

This realization was so exciting to me! This means that I, an ordinary person like anyone else, can also pursue my true passion, and in doing so become extraordinary. Like most people I have hopes and dreams, but also anxieties and doubts about my life’s purpose. But I am starting to realize that I can find it and make it tangible.

Now, I have no delusion that I will ever be a top-selling recording artist, and it’s highly unlikely that I will ever win the Nobel Prize in Medicine. But I know that I have at least some rudimentary writing skills and that I love writing.

I am a writer. I want to make it my life’s work in a way that is both personally satisfying and that adds something significant to the greater good.

Never mind that I am an incredibly busy wife, mother, and equestrienne, who happened to take an enormous detour around my passion by becoming a physician with an extremely demanding career. This is but a minor detail.

I am virtually certain that all I need to become the writer I want to be is a massive amount of faith, practice, constructive criticism, late nights, improvement, rejection, anguish, joy, and inspiration.

Ultimately we all need inspiration to keep us moving toward our dreams. We need only to look to other ordinary people who are pursuing their dreams and passions.

Inspiring people are all around us. The medium is irrelevant. For some, inspiration might come from watching a local dance troupe or band, by analyzing a beautiful work of art or an architectural wonder, or by watching a yogi master an extremely difficult pose—ordinary people do it all!

We also have to realize that we can be the source of inspiration for others.

Encouragement can remind others that to be extraordinary, one only has to be ordinary!

I recently had the pleasure to become acquainted online with a young lady who is blind and who has found a passion for horseback riding. Reading about her abilities as a rider amazed me. She recently posted a link about Paralympic equestrian competition, clearly demonstrating interest in this level of competition.

But when I asked her in a post if this was a future goal, she replied how she doubted she would ever be that good, and that it would only be “in her wildest dreams.”

When I assured her that of course she could become that good, and I pointed out my epiphany about what ordinary people can do, the tone of her reply changed to “I’d like to see how far I can take it.”

She probably had this thought somewhere in the back of her mind to begin with, but was afraid to verbalize it to someone else. A few encouraging words gave her permission to give her wildest dreams life and make them a real possibility.

The only thing we must remember is that people who have already realized their dreams didn’t just wake up one morning being extraordinary at what they do. They fiercely protected and nurtured their dreams.

If we want to make our dreams come true, we must do the same—and we must realize the things we want most are, in fact, entirely within us.

Mary is a wife, mom, equestrienne, physician and writer from Tucson, Arizona who is based in Barcelona, Spain. She writes a blog, www.myhorseisafrequentflyer.com about her life as an expat in Spain with her family and her horse. She recently started an experimental shared writer's blog, www.garagebandwriters.com.

How Accepting That We’re Ordinary Opens Us Up to Love

How to Live an Extraordinary Life, Starting Right Where You Are

6 Steps on the Path to Passion and Fulfillment