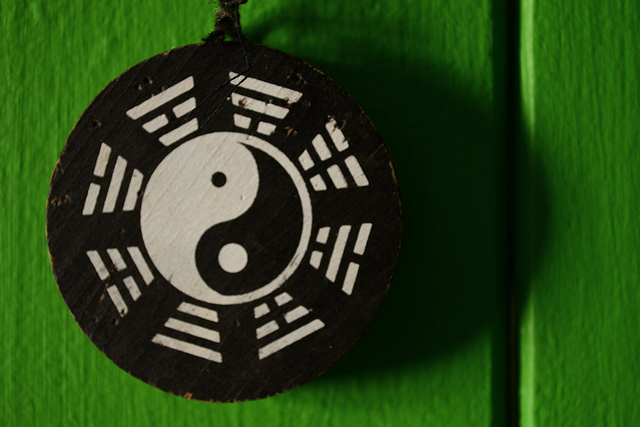 “By accepting yourself and being fully what you are, your presence can make others happy.” ~Jane Roberts

When I was a little girl, I played a lot of imaginary games and spent a lot of time on my own. I wasn’t particularly popular. I was a complete goodie-two-shoes.

I had no idea what I wanted to be when I grew up. When people asked me, sometimes I said a vet, sometimes an interior designer, sometimes just to work for my parents who have a fruit importing business. Truth is, I had no idea.

Why do people think a child would know? Sure, you can know things you like doing, but know what you want to do for a living? That’s a tall order for many adults to answer definitively.

So, I grew up. I finished school. I got my bachelors degree. I joined the family business. I did everything that was expected of me.

Here’s the thing about doing what’s expected of you: having those expectations means you don’t really get to figure out what you want to do.

I started doing yoga in university and during that time started to explore a more spiritual side of myself that I’d not really touched on before. I realized I loved helping people and being in nature. I loved the peace I felt at the end of my yoga classes and I loved listening to people’s problems. Turns out I was pretty good at asking the sort of questions which got them answers too.

But none of that mattered, because I had a ‘proper’ job. I left the family business and moved to London with my boyfriend at the time to develop my career. I was fast-tracked up the ladder and got to senior management within eighteen months. Everyone was so proud of me. I was proud of me. I’d worked my butt off and I was great at my job.

The only thing: I felt like I was being torn in two.

The person I was at work was completely different to my online persona and the one I was at home—the one who counseled people and had studied part time for her diplomas in yoga, hypnotherapy, and counseling.

At work I was professional and logical, with an eye for detail and seeing the bigger picture. I made tough decisions and managed teams of people with grace and business acumen. (Way to blow your own trumpet, hey?!)

At home and in my ‘other’ life I was a caring, nurturing, slightly under-confident hippy who loved helping people, standing on my head, and laughing with friends.

For quite a few years I tried to hide my hippy-self from work and my corporate-self from home and yoga and therapy self, but ultimately, I always felt like I was half a person. I was never quite being myself. Whatever ‘myself’ was.

There were various times when I thought I had to do one or the other; when I had decided I was going to leave the corporate world and be hippy-me full time, but that never really materialized.

Funnily enough, the idea of giving up yoga and therapy and concentrating fully on my corporate persona was never an option. I guess I’m more hippy than corporate and, ultimately, I needed hippy instinct to survive the corporate world.

Why am I telling you about my dalliances with trying to separate my two personas? Because there has to be a balance. For whatever reason, the universe was not ready for me to let my corporate life go.

A few weeks ago, fresh off the plane from an Ayurvedic and yoga retreat in India and spending time with my family in rural Wales, I eventually summoned the courage to tell my director I wanted to leave. I had to follow my heart, I told her. I want to be closer to my family, I told her. I’m a country girl at heart, I told her.

Then, she told me something. She said, “People think you can’t have the best of both worlds, but you can.”

Then she offered me the option of working part time. It was something I’d never really looked at seriously. I hadn’t even considered that I could meld my two personalities and it would be enough for either.

I’d always felt torn, feeling one was fake and one was real. I never even considered the possibility that my two sides could compliment and help each other; that they could make each other whole.

I don’t know how my dual roles will work—now I am working part time in a corporate job and part time as a therapist—but I do know that, instead of fighting with myself, I have learned to accept both sides of myself.

It’s not a terrible thing that I am logical and professional and can work well in a pressurized environment. It doesn’t mean I’ve sold out of my hippy roots. Nor is it a bad thing I believe in energy healing and the power of meditation.

All sides of my personality are valid. They make me who I am. They will always influence the other parts of me. I am whole. Denying one part would be to lose a part of myself.

So if you feel like you’ve got two different personas fighting for attention, with one invariably being left in the dark, perhaps try to shift your perspective from them being opposing to complementary. There may be cross-overs you haven’t noticed before which might make things seem a little less black and white or all or nothing.

Emma Brooke helps stressed, the frazzled and the fuzzy refocus and take stock so that they can start trusting their intuition and take back control of their lives. Say hi at [emmabrooke.co.uk] or on [Google+]

Swipe Right on Mindfulness: My Apprehensive Journey into Meditation