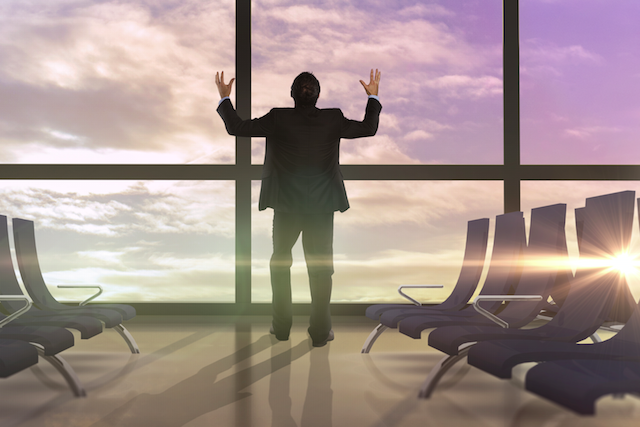 “Why don’t you just take up swimming?” the doctor asked.

I was twenty years old, single-minded in my pursuit of a dance career, visiting yet another doctor about the vicious tendinitis that had forced me to give up my spot at the prestigious Juilliard School in New York City.

What the doctor didn’t understand is that dance isn’t just a sporting activity; it’s a way of life, an identity.

Needless to say, I didn’t follow the doctor’s advice. Instead, I spent a good five years on the quest for the miracle cure, hopping from doctor to doctor, from treatment to treatment.

Life went on, I graduated from college, I got a job, but in many ways I was stuck. I couldn’t really invest myself in anything else, because surely I might be able to start dancing again at any moment, and I refused to do anything that might jeopardize that possibility.

As a result, I lived my life in a sort of painful limbo.

I was unable to dance, but I was unable to move on either. Dance was like a bad lover who never truly cared for me, but kept me on a string, waiting in the wings, sighing my life away.

Thankfully, I eventually did move on. It took about five years, but I finally accepted that a career as a dancer was not in the cards, and though I had to grieve this loss, once the fog of grief cleared, I found to my surprise that my chances for happiness had not died along with my dream of being a dancer.

Perhaps it was my youthful naiveté that led me to believe that dance was my one and only passion. Perhaps I was influenced by the false, but sadly very prevalent, notion that we each have only one soul mate for all of time.

Whatever the reason, I truly believed that I’d burned through my one shot at passion, and that I was destined to live the rest of my life in black and white.

(This may sound overly dramatic, but remember, I was barely out of adolescence at the time, and young people do tend to be dramatic.)

Just a few years after I decided to move on from dance, not long after getting married, I discovered a love of calligraphy and making things with my hands. Lo and behold, it turned out I wasn’t limited to one passion after all! I became just as passionate about art as I’d ever been about dance, and even started a business selling my art.

Then my marriage fell apart. During the painful year of my divorce, now that my tendinitis had finally cleared up, I started going out salsa dancing for fun, and I discovered that lost things sometimes come back.

Yes, I’d lost my dream of a dance career, but it felt like dance was being given back to me, in a new form.

Now I had not one, but two passions: art and salsa dancing!

The Universe has a wicked sense of humor, though, and a year into my salsa mania, a new foot injury flared up. I could barely walk, let alone go out salsa dancing. Once again, the thing I loved to do was barred from me.

This time around, though, things were different. This time, I didn’t hang around in limbo.

I still got to have my art, for one thing, but I didn’t settle for that alone. Some friends had taken me to see Teatro Zinzanni in San Francisco for my thirty-fourth birthday (imagine Cirque du Soleil plus a five-course meal) and I had been transfixed by the aerial artists.

“I want to do that!” I thought. And instead of putting the idea on a shelf (as I had with so many other ideas in my life), I thought, “Heck, why not? If I can’t dance on the ground, I will dance in the air!”

They say that when the Universe closes a door, it opens a window, and I leaped through that window! I found a circus school about an hour away, enrolled in an aerial arts class, and for the next year I did dance in the air.

What a difference from the first time I lost dance!

The first time, I refused to accept how things worked out. I admire my persistence, but I must say it didn’t lead to happiness.

I don’t have any regrets about how things turned out, but I sometimes wonder how things might have been different if, instead of just doggedly aiming down a path that no longer existed, I had also kept my eyes open for an alternate path.

What if, for example, I had discovered aerial arts at twenty instead of thirty-four? What if I had opened my mind to the possibility of a completely different passion?

Eventually the crappy things that happened in my life fertilized some rich harvests; I just spent a lot of miserable years first.

With an open mind (and a liberal dose of patience and self-compassion), the worst things in my life have alchemized into unexpected gold.

It can be hard to keep an open mind when things go terribly wrong, but the happiest people do just that. Challenging as it is, I know it has done me immeasurable good to let go of my attachment of how I think things “should” be.

This, if you think about it, is the ultimate dance: dancing with the Universe. Whatever tempo or style of music it throws at you, our job is to make the best of it, say yes, and take a spin around the floor.

Man at window image via Shutterstock