Forgiving Abusive Parents and Setting Ourselves Free
By Iva Ursano 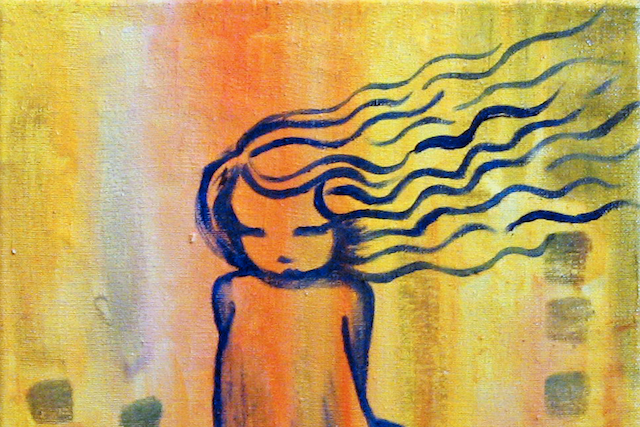 TRIGGER WARNING: This post deals with an account of physical abuse and may be triggering to some people.

“Forgiveness is not always easy. At times, it feels more painful than the wound we suffered, to forgive the one that inflicted it. And yet, there is no peace without forgiveness.” ~Marianne Williamson

Growing up in the seventies and eighties with Italian immigrant parents definitely had its challenges. In a family of four girls, I was number three. That in itself was tough enough. Never as good as the first-born and not as loved and protected as the baby. Yes, it was challenging.

On the outside, one would think that we were a picture perfect family. Our lives were as normal as normal could be.

Both parents worked. We had a beautiful house in a nice, quiet neighborhood. We all went to good Catholic schools. Had fun family vacations in the summer. Our parents entertained a lot, so there was always a bustling of activity at the house. Picture perfect, indeed.

Unfortunately, Mom and Dad lacked parenting skills. Sure, they provided food, shelter, and the necessities of life. Compassion, encouragement, and love? Not so much.

My mom was cold and mean to Dad, and often to us. My dad was cold and mean only to daughter number two and me. I never liked my dad. He didn’t get us. He was always angry with us. I’m pretty sure he didn’t even like me.

And so began the misery.

The beatings started when I was ten and continued until I finally fled at eighteen years old.

I ran away several times throughout that period, always returning simply because, as bad as the beatings were, I had a nice roof over my head, food in the fridge and great meals, a nice bedroom, nice clothes, and all kinds of other luxuries.

So in exchange for all these lovely things, I took the abuse.

I never knew when I was going to get beaten either, which was the worst part for me. It wasn’t always like I knew I did something wrong, though I’ll admit, I wasn’t an angel.

More often than not though, it was more like, if sister number two did something wrong and she wasn’t around to get beaten, they took it out on me. I was always on my toes. I never knew.

There were many nights I would be in bed sleeping. Dad would come home late from work, bust through my bedroom door, tear off the blankets, and whip me til he thought I had learned my lesson. The problem was, I rarely knew which lesson I was supposed to have learned.

I can recall one incident when my parents had company over for dinner, a lovely elderly couple, a minister and his wife. I loved them so much. They were the sweetest people you could ever meet.

I came home from a friend’s house, Mom and Dad and John and Sally (not their real names) were sitting in the living room having coffee. I came running in, so very happy to see them, and Dad had that look on his face.

I froze. Omg, you’re kidding me, right? He’s seriously not going to do this right here, right now, in front of these people, is he? Yup. He sure is. And he whipped me right there. He had an audience and no one stopped him. They just sat and watched. And once again, I had no idea what I had done.

I hated my father and lived in fear of him throughout my teen years.  Constant fear of never knowing when the next beating was going to be.

As I grew older, I tried to have more of an appreciation for him, but failed.

I tried to gain his respect and love as I grew into a beautiful, somewhat successful woman. That didn’t work much either. I gave him a grandson that carried the family name. That seemed to work a little. He respected me a little more then and actually even supported me more. Finally something.

I spent most of my adult years trying to forgive him, like him, maybe even love him a little. The forgiving finally came. Liking and loving, not so much.

It was clear in my thirties, forties, and into my fifties that I simply did not like my father. Not one bit. Because of that, I lived daily with this monkey on my back. This thorn in my side. Guilt in my soul.

It ate away at me constantly. Why can’t I just let this go? Who knew that forgetting wasn’t going to be as easy as forgiving? I always thought that once you forgave something, you just naturally forgot about it. Nope. It was clear to me it just didn’t work like that. Not for me anyway.

Step Up to The Plate

Years later, Alzheimer’s had struck Mom and it was time to place her in a nursing home. Dad was eighty-four and home alone. This meant only one thing to me. It was my turn to look after dad.

Daughter number one and I had a schedule worked out. She was retired; I worked full time, so my *duty days* with dad were limited to two to three days a week. That’s not so bad, right? Wrong! It was the hardest thing I’ve ever had to do, and I cringed every single time I pulled into the driveway.

My job was to sit and have dinner with him and keep him company for an hour or two. I had nothing to say to him, ever. I could barely even look at him. I had no patience for him, and the only thing I felt was pity.

He was a pitiful old man, sitting alone in a house waiting for people to come visit him, and all I could think was, “Good for you! You deserve this, you miserable old man.”

I know, shame on me.

Two years later, we finally placed him in a nursing home. My visits were few and far between. I was overcome with guilt. I should be visiting him more often, right? He’s coming into his last years now and all he wants is love and company.

I just couldn’t do it. There was nothing left in me.

I went about once a month, maybe every two months. Still cringing. My only thought was “Geezus, when is this old man going to die?”

Pretty sad, eh? Here was the man that gave me shelter, food, clothes, money when I was broke, took me on nice family vacations every summer, and all I wanted was for him to get out of my life.

Fake It Till You Make It

I struggled with these emotions for a long time. How is it that I, Iva, the sunshine happy girl that sprinkles pixie love dust everywhere, could possibly be having and thinking these horrible thoughts?

It took some time but I finally learned to rewire my brain. Think new thoughts. “Fake it til you make it if you have to” I kept telling myself.

I realized it wasn’t going to kill me to show him some love. Some compassion. Show him something for goodness sake, Iva! So I did.

I hugged him when I went to visit him and said, “I love you daddy” when I left. Maybe it was a lie, but he didn’t know that. That’s all he needed to hear. Someone to tell him they loved him. In his last lonely moments of his life, dad just needed love. And I gave it to him.

I dug deep down as far as I could and gave him the love he longed for all his life. It meant little to me but everything to him. That’s all that mattered.

Understand and Set Yourself Free

When Dad died at eighty-eight years old, I cried tears of relief and closure. But it wasn’t his death that set me free—it was the choice to forgive and treat him with more kindness than he offered me. I knew then the pain hadn’t scarred me for life; I had taken that pain and turned it into strength and wisdom.

I forgave him because I could finally see he raised me the only way he knew how. That’s all he knew—it was how he was raised—and I felt sad for him.

Did it make it okay? No. Understanding doesn’t mean we condone it when someone hurts us. It means we understand. And understanding and compassion are the keys to forgiveness.

When You Don’t Like Being Nice: What to Do Instead

4 Questions to Turn Your Anger Around and Forgive