Freedom in a Life Full of Problems
By Bryarly Bishop 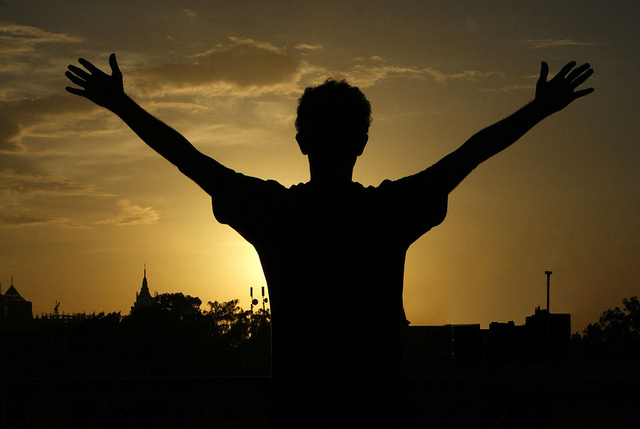 “Freedom is what you do with what’s been done to you.” ~Jean-Paul Sartre

Sometimes it seems like life is conspiring against you.

This often happens just after a moment of pure joy. You’re walking down the street thinking, “Wow, I am so unbelievably lucky to be alive.” A few hours later, you get an email saying you’ve lost your job. Or you’re in danger of getting deported. Or your cat’s been run over.

For many people, these situations seem to be completely out of their hands.

The thing is, every problem has a solution, and usually more than one. We can spend so much time despairing over an issue that we forget that each challenge can be addressed in a thousand different ways—some good, some bad.

I recently left my home country to study abroad in the United Kingdom. I didn’t think that it would be difficult before I left, but have since found that my imagination was severely lacking.

The language is the same, but that’s about the extent of it. Since I’ve been here, I’ve had to question everything about myself. Can I do well in my classes? Am I brave enough to be here? Can I handle this?

In the last week, I’ve had to drop courses, I’ve been unable to open a bank account, and I discovered that I am in danger of being deported. All of these things are terrifying, numbing even.

I carefully chose each class, four months before arriving in the UK. Within two days of arriving, I learned that two of these courses wouldn’t be possible. I panicked—what if I couldn’t get credit for these classes?

I only have two semesters left; I can’t afford to spend time on courses that won’t go toward graduation. The possibility of failing to graduate sent me into a tailspin.

After a quick scramble to find a new class, I received a startling e-mail from the school. Since I’d signed up for one class initially and had to change at the last minute, I’d “missed” two classes.

Due to the stringent new UK guidelines, that’s enough to earn me an interview with the University, an appeal to the Dean, and the possibility of being forced to leave the country. It was already too late to register for spring classes in the States; what would I do if I had to return?

There are so many outside forces at play that keeping calm and handling the situation seems impossible. I have no power to fix my own passport, nor can I change the university policy. However…

As I said earlier, there is always more than one solution to a problem. Always.

If I can’t open a bank account, I can withdraw money from an ATM and buy a lock. If I can’t get my passport fixed, I won’t travel outside the UK. If I get deported, I can go home and work for six months and then graduate a semester late.

As a matter of fact, I did have to give up on a bank account. That means that I have to get comfortable with withdrawing money every so often rather than using a debit card; but, having accepted the initial insecurity, I think I can handle it.

I can’t control other people, and I can’t always control a situation. But I can control how I handle it.

This Sartre quote caught and held my attention. How many debates have we heard over the existence of free will over the past years? First, religion was the big controller, then evolution, then psychology, and now neuroscience (which, somehow, goes back to evolution again).

I can say that the way you react to everything that happens is the truest choice you have, and the most individualized thing about you. Whatever is going on in your life—and I can guarantee that there’s something—it is up to you to determine the direction of your challenges.

For me, I think of it as a possession.

This problem may be gnarly and awful, it may take up all of my time and keep me awake at night, but it is mine. I can do whatever I like with it. So I get caught in the rain. There are puddles, aren’t there?

Life is going to be a series of problems.

I think about it as a video game (or you can think of it as a language class, or a sport, or cooking, or a book, or whatever blows your hair back).

Let’s say that on the first level you have to get past an evil turtle. Sure, okay, got it. On level two they add a turtle. Can you make it past two? Yep, you sure can! All right, then let’s add a ring of fire on the third level. As soon as you pass one challenge, you’re presented with another.

These challenges are what make the game interesting and fun.

I realize that life is never as simple as one of these childish games, and that some problems can seem to carry a lot more emotional weight than others. When you give up on a level, a chapter, or a fiendishly difficult recipe, nothing much has changed. You can go about your day as normal.

Many of the things we face are so much more serious than this that it’s hard to believe that the same principles apply.

Challenges are just that: challenges. Not impossibilities—just instances that take a bit more from us than we normally give. And with every challenge, you learn a little more about your skills and strengths.

I agree that some problems can be frightening. They can break your heart, empty your bank account, and leave you feeling so down that down looks up. There’s just no way to avoid those challenges in life.

But, as long as you’re above ground and moving, you have options. You have choices. There is always something you can do.

This thing that has been thrust upon you may not be to your liking. You may not have caused it. You may not have had any part in its manifestation. But now that you are a part of it, you can accept it and adjust your experience in any way you like. That’s finding your own freedom.

Bryarly Bishop is a college student looking to make the world a little brighter. For more written work, visit her blog at http://why-knot.tumblr.com/ or for a few quirky videos visit Bryarly's You Tube page.

How to Love a Lying, Cheating Heart