The Gift of Kindness: A Simple Reason to Give What We Can
By Jonathan Wilson 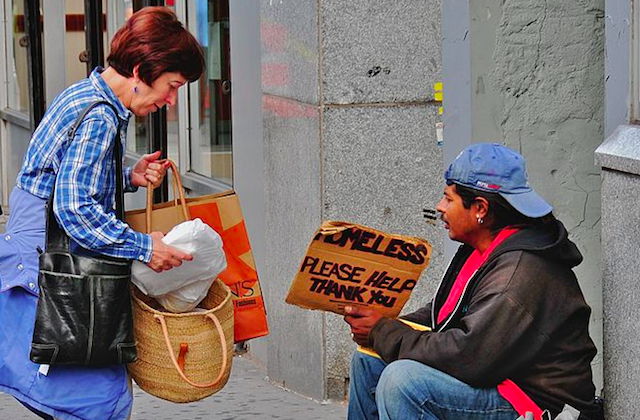 “Love and compassion are necessities, not luxuries. Without them, humanity cannot survive.” ~Dalai Lama

We were circling the block looking for parking when I spotted him on the sidewalk in front of the bank. For some reason he stood out from the other people in the area.

“Seems off,” I thought to myself.

As I passed by, I kept an eye on him. He didn’t seem to be going anywhere, just walking back and forth along the sidewalk in front of the bank.

He was looking around and moving around like he was waiting for someone, but clearly he was alone.

We came back around the block and I parked in a loading/unloading zone.

“Make sure they don’t tow me,” I joked to my wife. I hopped out of the car and made my way to the bank’s ATM on the sidewalk.

Halfway through the transaction I heard a very small voice coming from behind me.

The voice was so small that at first I wasn’t sure if he was talking to me or someone else. I continued with my transaction without acknowledging the question.

At this point I realized that he was talking to me. I didn’t respond.

The voice got smaller and turned into mumbling. I couldn’t understand what he was saying.

I finished the transaction and turned back toward my car. He was standing near my car but not in the way.

I looked at him.

In front of me was a disheveled, forty-something man. The years appeared cut into his face in the form of deep wrinkles accentuated with dirt.

The wrinkles could have meant a man much older, but his overall demeanor suggested youth. He still had the aura of a younger person.

His hair was very short and he was holding a coffee.

As I walked toward my car he stopped talking. I got around to the driver side and opened the door.

“No,” I said loudly and resolutely while looking at him. It was the answer to his earlier question, and also an answer to him in general.

Driving away I felt uneasy and my mind replayed the situation a few times.

I have given money to people in the past. It hasn’t happened often, but sometimes.

My problem with this man was that I felt he didn’t need the money. It was the coffee that bothered me. He had a cup of coffee in his hands. Premium coffee.

Coffee, I later learned, would be our connection.

I had forgotten about him by the next day while I was waiting in the Starbucks drive-through line. We reached the service window.

“Hi! The car in front of you paid for you,” the barista said.

“What?” I replied. I was caught off guard.

“Your order has been paid for,” she reiterated. She handed us our items. “You’re good to go.”

“Thanks,” I replied reaching for the items.

My daughter asked me why I was shaking my head as we pulled forward.

“The universe is always teaching me lessons,” I said smilingly.

She looked at me blankly.

That’s what I call it when stuff like this happens—the universe teaching me lessons.

Over the years I have learned to pick up on this phenomena. The lessons are broad and typically focus on topics like compassion, forgiveness, understanding, and renewal. They always emerge through the random coupling of everyday events.

Some lessons are blatant, but others can be very subtle. The subtle ones are the best. Sometimes I will only “get it” after a couple of days letting it sink in.

This one I considered blatant. The lesson being:

Share what you have. Give—even if they don’t need it.

I didn’t give that man any money because I didn’t believe he needed it. My assumption was that earlier that day he had traded some of his money for that coffee he was holding.

If he really needed two dollars, then he shouldn’t have spent his money on that coffee.

But, that reaction is totally contrary to the lesson.

Later, as I stewed on the lesson, a couple of thoughts occurred to me: Maybe there was no coffee in that cup. Maybe he was collecting change with it. Maybe the cup was empty. Maybe the cup only had water in it.

The point was that I didn’t know. I assumed.

The bigger point was that it didn’t matter whether the cup was filled with premium coffee, gold coins, or anything else.

Giving is not about the other person’s perceived need; it’s about the act itself.

We are choosing to be the best version of ourselves when our actions demonstrate the best within us.

Do you remember how you felt the last time you gave? I am willing to bet you felt good about yourself, and good about the act. And that’s great!

Now, was that good feeling because you filled a need, or because of the act in general?

Think about it. You can say it was both, but I am also willing to bet that you would feel just as good if you gave to someone who didn’t really need it.

The good feeling comes because giving is an act of kindness.

The person in front of me in the drive-through that day could have looked in her rearview mirror and concluded that I didn’t need it.

After all, I am driving a newer car, my clothes were clean, and the assumption is that I can afford a coffee since I am already in the drive through line.

Her gift to me was not because I needed it.

Her gift to me was about kindness. It was about doing that extra little bit to lift someone else up.

Jonathan Wilson is a Seattle area writer and creator of The Red Cabbage. TRC provides inspiration, unique insights, and rock-solid strategies for 30-somethings looking to accelerate in business and life. Join our community and receive my free web series and e-workbook, 7 Questions to Uncovering Your Purpose.

3 Negative Inner Voices and How to Challenge Them