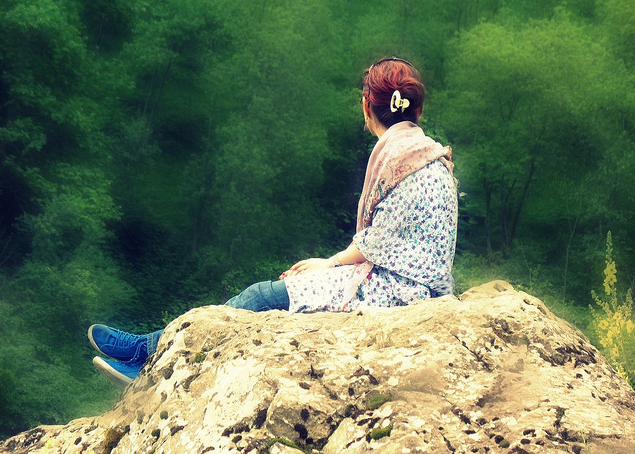 “What you do have control over is how you react to what happens in your life.” ~Oprah

How vulnerable it is to care deeply.

Because, oh God—the white-hot shame of caring, and having your caring exposed when it doesn’t happen despite your best efforts?

The thing I wanted most since I was a little girl was to be a published writer. Published, as in bound book in hand, “by Kate Swoboda” on the cover.

As a child, I spent hours writing books—real books, from beginning to end, sometimes illustrating them with pictures.

I majored in English with a writing concentration in college. I went to graduate school for writing. I continued to write full-length books.

Finally, when I was 24 years old, I thought I had my chance.

I had entered my novel to a fiction contest and received an honorable mention. At the awards dinner, the judge told me that I had almost won the first-place award.

The best-selling author who financially backed the contest said, “I want to read your manuscript.” Another writer at the dinner—a legit writer who has had her books turned into movies—said, “I’ll put you in touch with my agent.”

I don’t think I drove home. I think I flew home, light as air, high on the possibilities.

The writer gave me the information, and I overnighted my manuscript, a complete novel, to that agent. Then I spent the next month—every day—thinking about this agent calling, and how this was it, the big break.

Three months later, I finally got a polite rejection email. I was crushed.

I often wonder if there’s some mechanism that modern-day society is missing when it comes to disappointment.

Were generations prior better equipped to handle disappointment because they lived in a time when they didn’t get constant, recurring instant gratification? Is that what it takes to learn how to deal with disappointment better?

Here’s how I dealt with my disappointment: I told myself that I didn’t really care.

I knew that I was not “supposed to be” crushed. I knew that the writing industry demands tough skin.

“It’s okay,” I told myself. “I don’t really care. There will be another opportunity.”

“It’s All Happened For a Reason”

I moved from pretending not to care, to logically justifying the process.

This is the next thing that we do. We commit what Ken Wilbur calls “spiritual bypass.” In an effort to not feel the full weight of the hurt before us, we start talking about how whatever happened was “meant to be” or maybe there was a “larger plan.”

Hittin’ up the LoA

I went from “not caring,” to logically justifying the process, to obsessively wondering where I had screwed things up, LoA style—you know, Law of Attraction.

I dig the whole manifestation scene—really, I do—but you can see how there are roads you can disappear into with this path that are just not helpful.

All roads, in this case, were pointing to: You did It wrong. I didn’t know how, but somehow, I hadn’t manifested properly. This meant that I didn’t believe in myself in some way.

Care deeply. Care that it didn’t work out. Care, and care, and care, because the restrictions placed on your heart to not care don’t do anything for you.

Yes, that’s right—time to cry it out.

Closing off your heart in order to not feel the pain of caring just makes the wound last longer.

After you’ve spent some time caring, it is time to see whatever has happened in light of the bigger picture.

Maybe it truly is the best thing that it didn’t work out. You can never know. Everyone’s convinced that they’d be happier if they won the lottery, but study after study shows that richer people aren’t happier.

You can truly never know that it would have been “better” if it had happened the way you’d hoped—so go ahead and trust that there is a logic and reason to things happening the way they happened.

Just don’t try to skip to that step before you’ve taken time to deeply care.

And finally? I have a personal theory that obsessing about LoA philosophies is bad for the soul. Instead, I prefer a more pragmatic approach—aim high, work hard.

You’ve just suffered a devastating breakup? Aim high for your vision of an ideal mate—dream big, no settling. Create the vision in your mind. Then, work hard to make sure that whatever fouled your last relationship doesn’t intrude into the next.

You’ve worked hard for a promotion and it didn’t happen? Aim high for the promotion that you want (or the better job opportunity! with more pay! and a corner office!), and then, work hard to do what it takes to get there.

You’ve submitted your novel to a publisher, and they said no? Aim high for the dream of publishing your work, and then, work hard to do produce the best writing you can.

I’m not saying to “work hard” by lashing yourself with the whip of perfectionism.

I’m saying, quite simply: Hold a beautiful vision, and then do your best to get there.

In my case, I had no idea that the digital revolution would empower me to write and publish my own work. That’s precisely what happened, and now I publish book-length works each year where I get 100% of the profits and 100% of the creative control—and, when all is said and done, I’ve made about the same amount off of my work as I would have on a book advance.

This isn’t to say that I would say “no” to a publisher, so much as it is to say that I aimed high with my vision and stayed committed to making it work somehow, some way.

It Won’t Break You

Where we get stuck is when we aren’t willing to care. That’s how it is that so many people try once, fail, and then never try again.

All of that pent-up desire needs somewhere to go.

Let it go out through your tears, or through hitting a pillow. Because seriously? Sometimes life really isn’t “fair.”

But by all means, create the circumstances under which you will be able to thrive again.

Go ahead and care. It won’t break you.

Kate Swoboda is a coach, speaker, and writer who works with women who want to live unconventional and revolutionary lives through practicing courage. She's the creator of The Courageous Living Guide and The Coaching Blueprint, and she hangs out online at yourcourageouslife.com.

The Zen of Writing: 7 Lessons About Living Wisely