Happiness Comes to Those Who Live Their Calling
By Mark Hermann 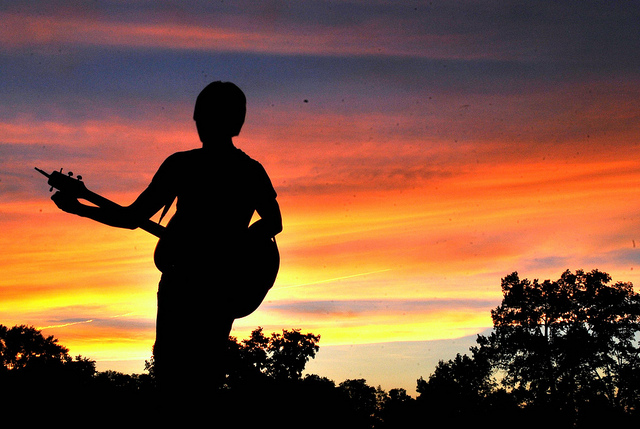 “Let yourself be silently drawn by the strange pull of what you really love.” ~Rumi

I was on tour with a famous rock legend, Joe Walsh from the mega-successful seventies band, The Eagles.

We were riding around in one of those air brushed tour busses, living the party life and flying to exotic places. Staying in the finest hotels. Beautiful women hanging around the backstage door trying to get my attention.

You would think this would be a dream come true, right?

Here I was rubbing shoulders with people like Stevie Nicks, Willie Nelson, and The Fabulous Thunderbirds, and yet, I wasn’t happy. Not really.

And you know what really sucks?

When you’re so close to your dream you can almost reach out and touch it, but for some reason you can’t. Something is holding you back.

You spend years working hard just to get next to it. You’re working right there in the area of your passion. But you aren’t actually living it.

You’re helping someone else to live theirs.

It feels like your face is pressed up against a glass wall. And there, just on the other side is the thing you’re really supposed to be doing.

I was his sound engineer. But the dream was to be playing guitar up onstage with him.

The band and crew were like family because we had done several tours together. Joe knew I rehearsed regularly with the band when he didn’t show up and that I knew the music cold.

Even the guys in the band agreed it would sound better if I was playing the other guitar parts but it wasn’t their place to say.

All I had to do was ask. But I couldn’t seem to get up the nerve. I just couldn’t get past the uncertainty of what might happen if I took the leap and got shot down.

I was poised to jump but paralyzed by fear.

I guess I was just hoping the other band members would put in the good word and do my bidding for me by asking to have a second guitar player.

Nothing happened. The train kept a rolling with me still behind the soundboard. Still unhappy.

I figured out in the silent weeks that followed that no one just hands you the keys to the highway. You have to ask for them.

Finally, I arrived at the place where I could no longer stand by and accept my “close but no cigar” status. The idea that I would have to live with the consequences of not trying was simply too much to bear.

So I decided to cast my fears and uncertainty to the wind and just ask Joe if I could play the gig.

And then something very strange happened.

I never got the chance.

It was as though the universe finally heard from my heart. It recognized that my commitment was real and decided it was time for a change.

That night in beautiful Santa Cruz, CA we were out at a birthday party for one of the band members at this amazing restaurant. The food was incredible, the wine was flowing, and everyone was feeling fine. I was sitting next to Joe when he turned to me and dropped the bomb.

“What songs would you want to play on if you were to join me up onstage, man?” he said.

At first, I wasn’t sure I had heard correctly. But the smile on my face told me I had.

Suddenly, it felt like a great weight had lifted from my soul. This was affirmation. I was worthy of the dream after all.

When we arrived back at the hotel, Joe said he wanted to talk to me alone. He wanted to know how I was going to handle my new responsibilities.

We walked out onto the balcony outside his room, where I was immediately struck by the awe-inspiring beauty before me. A full moon was shimmering over the Pacific Ocean as the waves crashed on the beach.

We stood there in silence for some time, just listening to the ocean when Joe finally broke the silence.

“Go on, man. Ask your Uncle Joe anything.”

“Anything at all?” I replied.

I thought about that for a moment and decided to go for the one question every human being really wants to know.

“What’s the meaning of life, Joe?”

He smiled and then looked down his nose at me, studying my expression, as if to see if I was really ready to hear the answer.

Here was a rock star worth millions but who also suffered from addictions at the time and personal losses that could never be healed by fame or money.

“That’s a good question, man. Are you ready for the answer?”

He gave a whimsical smile.

“That’s it?! That’s what this whole crazy game boils down to?!” I said incredulously, expecting something much more…grandiose?

I thought about this.

Here I was in my late twenties, a young man roaming the world with one of my all time favorite musical heroes. We made people happy wherever we showed up. I had to admit, life was indeed pretty great at this moment.

And that’s when I got it. This moment is all you ever really have.

“I can’t think of anything right now,” I said.

“I won’t,” I said smiling. Then he gave me a big hug and walked back inside.

For the rest of the tour I played guitar on stage for three or four songs every night. Right there next to Joe. My hero. In music and beyond.

I never forgot that night on the balcony.

By asking for what I wanted, a door opened up that set me down a path to an even greater destination than I ever could have imagined in that moment.

I have since moved back to New York to start a family and become the artist I was always supposed to be.

It hasn’t always been easy. I have a lot more responsibilities now, but I’m also surrounded by a family who loves and supports me.

I know of no greater happiness.

A few years back, my group won a battle of the bands and the opportunity to play the halftime show at a Nets basketball game. There were 16,000 people attending that night.

At halftime, the sound crew wheeled out our gear and ushered us out to the middle of the arena as the lights went down. A roadie crouched down and turned on my amplifier. I looked down and gave him the thumbs up.

Then I stared out at the crowd. I’m sure I was smiling. For a very brief moment, I was back on that balcony.

This time I wasn’t there to support someone else’s dream. I wasn’t working the show. I was the talent performing my own music.

This was my dream. The happiness of realizing your true calling.

You’re often so afraid to ask for what you want because you don’t believe you’re worthy of your dreams. (You are.)

Or you fear people will think you’re being pushy or arrogant. (You’re not. You’re being assertive).

Or if you ask for help people will think you’re weak. (You’re not. You’re human)

To ask from the heart is to touch the divine. By simply taking that action, you immediately free yourself from your fears. By letting go of the outcome and embracing the uncertainty, you enter the realm of infinite possibility.

Like your dreams, happiness is never given. You have to create it.

Fellow Dreamers: If You Feel Like a Fool, You’re on the Right Track