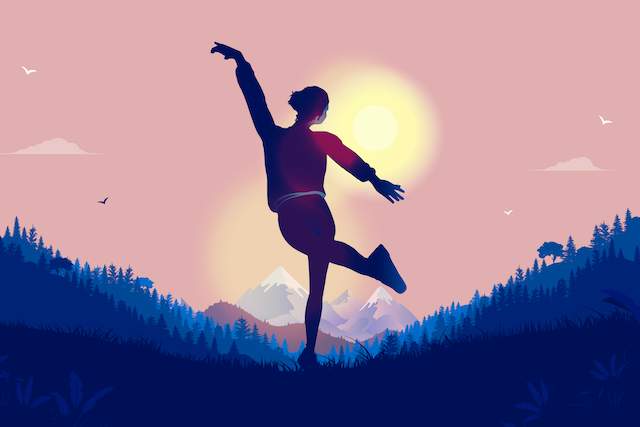 “The choice that frees or imprisons us is the choice of love or fear. Love liberates. Fear imprisons.” ~Gary Zukav

I come from a family of runners. When I was a young girl, my father would rouse us out of bed on the weekends to run the three-mile par-course at the local park, competing with my siblings for who could do the most sit-ups at the stations along the route. We would end the event with a bunch of chocolate eclairs from the local 7-11 as a reward.

As benign as this story may be, it describes a pattern of connection between exercise and food that, by my late teens, became a rigid and dominating force in my life.

The rules were clear: if you run or swim, you’re allowed to eat ice cream (my favorite treat); if you burn enough calories each day, you are a valuable human being who deserves to be on the planet and feel good about yourself. These beliefs crept in and took hold in my mind and became a kind of religion, complete with rules and a doctrine, as well as self-inflicted emotional punishments for deviation.

As many of us do, I received messages from the world about needing to control my body and food.

One family member told me that “making friends with my hunger” was an admirable power I should strive to achieve. Another time a complete stranger hit on me in a bar and when I declined to talk to him further, he said he thought at first I was “fat” (or maybe “phat”?) but now decided I was just “large.” I guess one was a compliment and the other an insult, but I found both mortifying.

In a strange way, I think becoming bulimic saved me from this rigidity. If I ate too much and didn’t feel like exercising, I had another way to repent of my apostasy: I could always purge. I read somewhere that people with bulimia can be described as “failed anorexics,” and maybe this was true for me.

By the time I reached my early twenties, I had made great strides in healing my eating disorder through psychotherapy, taking a deep dive into spiritual practices like meditation, and tuning into bodily wisdom and intuition. But my inner critic continued to torture me with demands for intense exercise.

I gained more weight than I ever had before as I let go of the most dangerous part of the eating disorder—the purging—yet it was more difficult to surrender the last line of defense between me and the fat, ugly, undisciplined mess I was sure I was doomed to become.

One of my mentors made a gentle suggestion that I give up exercise completely. I thought she was out of her mind! Her suggestion posed a threat to my ego’s fragile illusion of control over my body, so I pretended to entertain the idea but secretly shoved it away.

Eventually, though, I took a good, raw look at the state of my body and mind. I had chronic shin splints from high school and college sports that had never fully healed; my body was always hurting as a result of developing an autoimmune disorder; I had come to hate exercise; and outside of the ephemeral moments of peace I found during meditation, I was depressed and anxious.

It was time to put things on the line and test out the radical new approach to self-love, of not exercising.  So I decided that I wouldn’t exercise unless my body asked for it. For-real asked for it, not obeying the dictates of mental compulsion.

The first month was the hardest. Lots of self-criticism emerged, as well as fears about gaining weight. I breathed and talked to friends, did manual work cleaning houses (my gig at the time), journaled, meditated, prayed to a feminine divine presence whose wisdom I had begun to trust—if only just a little bit.

Then the feelings came. Lots of feelings. Crying, memories of things I had forgotten about from a childhood riddled with trauma and loss, fear about the future. Feelings of shame about my eating disorder, my body, my lack of accomplishments despite a higher education.

I started to notice more pleasant feelings. Pockets of peace and well-being, even moments of joyful laughter began to open like surprise packages from myself. Without exercise, my days became slower, more meandering and unstructured, and I felt free for the first time since I was quite young.

I became aware of an effervescent feeling inside my legs, a bubbly, tingly sensation. I asked myself—what the heck was that? Then it came to me, my body wanted to move!!

That day I took the most delicious walk in Golden Gate Park, not having any agenda about where I was going or how long I’d walk for. I found a grove of eucalyptus trees that shrouded me in complete silence, the kind of silence that is a palpable presence against your skin, like a hug, and I sat down in the middle of the grove and wept with joy. In that moment, I knew I was going to be okay.

In that moment, I didn’t care how big or small my body was. I just wanted more of this moving-for-pleasure, this moving that comes from deep within. Moving because I’m in a body that wants to express itself with joy, grief, play, and all the emotions in between.

That’s what happens when we stop pushing ourselves from a place of fear—fear of losing control, gaining weight, and not being good enough. We eventually feel pulled by a sense of love—for ourselves, for our bodies, and for the deeply satisfying and invigorating act of moving.

Did I ever feel “fat” again and try to force myself to run to make the “feeling” go away? Or suffer an attack from my inner critic? Yes, of course.

But what I discovered was that the journey out of an overexercising pattern doesn’t come from listening to the same old toxic and relentless demand for exercise. I had to rediscover the deep and spontaneous source of my body’s own desire to move in order to begin to heal.

Once I found that natural aliveness, even though the old fearful and manipulative thoughts preyed on my mind from time to time, they didn’t have as much power as before, and I could hear another, kind and compassionate voice, stemming from deep-body-listening.

My practice after that was to wait for that tingly bubbly feeling in my legs, which usually happened every four days or so, and use that sensation as a guide. Then I would take my bus pass, put on my running shoes, and walk or run as far or as little as I wanted.

Sometimes I made it miles to Ocean Beach and sat on the wall meditating, then took the bus back.  Other times I just went to my favorite grove of trees and prayed and cried and felt so incredibly lucky to have listened to the small, quiet voice bubbling up from within.

Meg Tinsley received an MA in Somatic Psychology from the California Institute of Integral Studies and is trained in a Jungian-inspired movement therapy. She is a psychotherapist and EMBODY coach who helps women reclaim healthy relationship with their bodies. She maintains an eclectic spiritual and movement practice. Feel free to contact Meg at megtinsleymft@yahoo.com with any comments or questions about this article or about her EMBODY course or EMBODY private sessions.   Explore more at: www.embodyher.org www.megtinsleymft.com

Being Skinny Doesn’t Make You Fit or Healthy