How to Become More Assertive to Seize Opportunities
By Matt Ramos 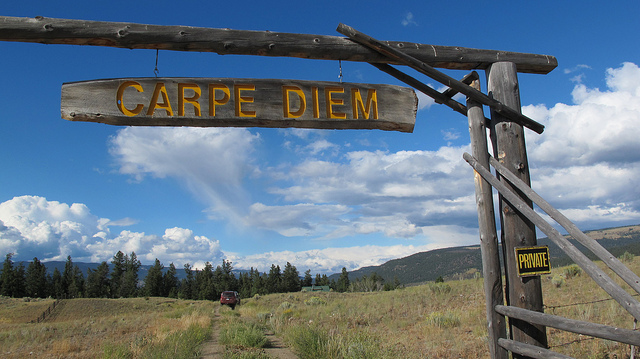 “In the long run we get no more than we have been willing to risk giving.” ~Sheldon Kopp

It was a foggy day in the city. We decided to go to the Science Academy in San Francisco—me and the most beautiful girl I’ve ever known.

We entered the aquarium. There was a blissful haze surrounding the room. There was a swirl of people going around. Yet, everything went into slow-motion. It was like there was an imaginary spotlight on her, and I gave her my full attention.

I was mesmerized by her voice, eyes, and everything about her, really. Then suddenly there was a deep sensation in my brain that I had not felt for so many years. I was in love with her.

As we continued to explore and talk, I had a few opportunities to share my feelings with her. And there were many opportunities when I could have kissed her. But I didn’t. I didn’t do either.

Looking back, I wonder why I didn’t do something to show her my true feelings.

She lived far away from me, and a couple days later, she flew back home.

I realized a long-term relationship would have been hard, but I simply wanted to share how I felt. I just didn’t have it in me to take action when the opportunity came.

Over time, my disappointment dissipated because I got busy with my life. However, when I had time to think again, that scene kept playing over and over in my head. Then a wave of regret would strike me. I’d start over-analyzing and thinking, “What if?”

I realized I didn’t want to have to think that again and that the key was learning to be more assertive.

I found an article about this game called Rejection Therapy. The only rule is to simply get rejected once a day for thirty days straight. I promised myself that I would try this out.

I started a blog to hold myself accountable. As the days go by, I want to spread the word to continue to raise my personal accountability level.

This concept has enabled me to take chances that I never could have imagined. I have already been rejected by my friends, possible love interests, strangers having a bad day, my own thoughts, and my family.

However, this experience has benefited me greatly. I initiated contact with strangers who are now my study partners in class. I asked for help when I needed it from professors.

I have done things that brought smiles to people having a boring, routine day. I have been able to introduce myself to others in a more confident way. I even got the opportunity to create this post for Tiny Buddha.

If you need a little help putting yourself out there and becoming more assertive, you may find these reminders helpful:

1. Not trying guarantees you won’t get what you want.

Part of the reason why people hesitate to make an initial move in any situation is their fear of rejection.

However, if you do not act, you’ll never know if they would’ve accepted your offer. Not being assertive and letting the moment slip away gives you a 100% chance of not getting what you want.

2. People aren’t looking to hurt you.

Many of the negative outcomes we imagine are, in fact, imaginary. The majority of people are going to be polite once you say “hi” to them or initiate conversation. Many times people will do what they can to fulfill your request.

From what I’ve experienced, people feel terrible if they have to reject you, but sometimes it is a good thing when they do. You wouldn’t want a potential date to accept your invitation unless the person was interested, right?

3. We don’t need other people’s approval.

The girl you tried to talk to tells you to get lost. The group laughs at your idea. These are risks worth taking to seize possibilities.

Sometimes when we hold back, it’s because we feel self conscious with people watching. But think about it—do strangers really care about what you’re doing? Most of the time, they’re not even paying attention. If they are, so what? Does it really matter?

I started conversing with someone on the bus today and so many people turned their heads toward me that I thought I woke everyone up. I decided to tune them out because their thoughts didn’t affect the outcome of my conversation.

Even if they had some sort of judgment, they were entitled to that. It didn’t affect me.

5. The three-second rule can work wonders.

Ideally, it is good to talk to someone within three seconds of seeing them so that anxiety can’t form in your mind. Once more time elapses, it becomes more difficult. Save yourself the trouble and act as soon as the instinct arises.

6. Accept mistakes and don’t be too hard on yourself.

I’m pretty sure I have said things that were a bit awkward or with the wrong tone of voice. Making mistakes is a part of learning how to become assertive.

At some point, everyone has said something that felt like the wrong thing. No matter how badly you messed up, feel positive about yourself because you took a chance.

Nothing holds us back like negative self-talk. Find your own personal way to overcome the negative idea.

It may help to mentally isolate the negative emotion and realize it’s separate from you. What works for me is to imagine a metaphorical mirror that reflects everything I suspect people are thinking about me. I then put a cover over the mirror to avoid that trap. Our actions and words stem from our mindset.

When I have a hard time being assertive, I remember that moment when I didn’t share my feelings and a girl I loved slipped away. Then I ask myself: Would I would rather risk rejection or have to wonder, “What if?”

Matt Ramos is a college student who wants to make the world a better place. You can read his blog at theapproachmachine.com . He writes about rejection, breaking social barriers, and altruism as a means of overcoming his struggle with social anxiety while making the world less boring.