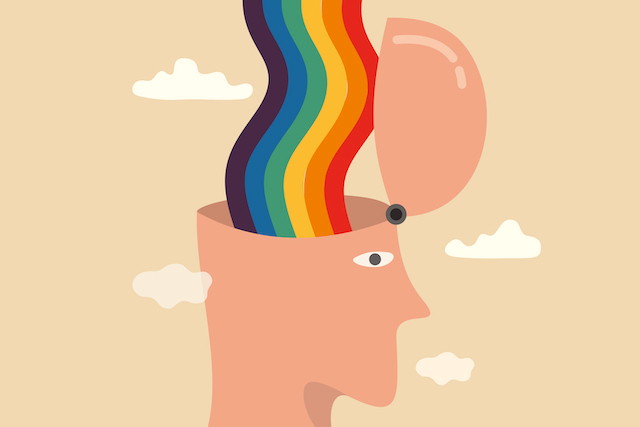 “All that we are is the result of what we have thought. The mind is everything. What we think we become.” ~Buddha

I used to teach Adult Upgrading. My students were people who had never completed grade school and/or high school. For a variety of reasons, they were now ready to try it again.

New students would say, “I wasn’t ever any good at school.” “I can’t do math.” “I hate fractions.”

It’s my belief that our self-talk is programming ourselves for our statements to be true.

Those students thought they’d been stating the facts, not revealing programmed beliefs.

My work was less about teaching math than it was about coaching them toward a change in their beliefs about themselves.

“I never again want to hear you say you’re not good at math,” I’d say. I’d ask them to switch to “I’m learning math” or “I’m getting better at math” or “I’m working on fractions.”

I’d help them start to notice their own negative self-talk and then transform it into positive statements. “Sure it sounds weird. So humor me,” I’d have to say. “Yes, I know it doesn’t feel like it’s true. Not yet, anyway.” They’d roll their eyes at me.

I’ve read that schools teach fractions before many of our brains are developmentally ready to cope at that conceptual level. I believe this, because I’ve met so many people whose problems in school began around the time fractions were introduced.

Children’s developing self-images are vulnerable. Once children begin to feel stupid about a school subject, the negative self-talk begins. It soon defeats their egos along with their will to learn.

My adult students did humor me, probably because I was such a nag about wanting to hear only positive self-talk. My use of pizza-portions and other grocery items as examples of fractions helped them realize they already knew about fractions and used them frequently in everyday life.

Gradually they’d begin to feel better about math. Many would even begin to enjoy it. Grade school math felt easier. Positive self-talk became natural. Other subjects became less overwhelming, too.

We all keep saying self-defeating and/or negative things to ourselves, don’t we! At the same time, we keep wishing it could all change. Well, it can change!

Affirmations. I’m sure you’ve heard about them. An affirmation is, simply, positive self-talk. It’s a statement about ourselves or our situation, phrased in the present tense as if the statement is already true.

Affirmations work to help us change. I’d like to share with you one method to start creating very personal affirmations.

1. Identify your negative self-talk and beliefs.

Do this in handwriting, not with a computer. Connecting your physical self with your neurons and psyche and intuition is important here. What our bodies do, our subconscious learns from.

Fold a piece of lined paper in half lengthwise and then unfold it. Down the left side, write a list of those self-limiting statements you’ve been thinking and saying. “I can’t afford a vacation.” Or “It’s hard to lose weight.” Or “I’ll never meet the right guy/woman for me.”

Stick to one theme or personal issue on this first list. Write everything that comes to mind on the topic. Don’t think, just be spontaneous and real. It needs to be a stream-of-consciousness set of statements.

Then spend a few days listening closely to yourself, to what you’re saying, thinking. Ask a friend to listen, too. Add every negative self-talk statement to your list as it comes up.

After you think you’ve written them all, wait. More will come. As you empty out the top layer in your mind, the next layer will be revealed and released.

2. Create some affirmations out of those beliefs.

This next part is not easy, but you can do it!

You are going to write some new statements. You may feel huge resistance as you do it. Maybe you won’t believe a thing you write. Perhaps you’ll feel discouraged. You’ll probably think it’s weird. But humor me, just like my students did.

Down the right side of your paper, across from each left-side statement, write a new one that transforms that negative statement into a positive.

The new statements must be in the present tense. Write “I am…” rather than “I will be…” or “I’m going to be…” Avoid using the word “try” because “I’m trying” is a self-perpetuating statement.

Fold the paper in half again. Never again read the left side. Ignore it forever.

Post the folded paper, positive-statements on top, somewhere you’ll see it often. Above the toilet paper roll. Over the kitchen sink. Read your affirmations from time to time, but there’s no need to dwell on your list. It is simply an occasional reminder that you’re transforming your thinking.

If you catch yourself thinking or saying any of your old (negative) beliefs, stop yourself. Transform it into the positive, right then and there.

Ask your family and friends to help by simply pointing out any negative self-descriptions when you say them. When they do, transform the negative to the positive immediately and say the new statement aloud to them.

The “magic” will happen, if you do the first three tasks. Truly! I’ve done this ever since I learned how, and I promise you it absolutely works. I have a good and happy life and things generally go my way. I believe it’s because I do this kind of work ongoingly.

Soon you will not only say you’re good at handling money (or whatever your issue is), but you’ll also begin to believe it and—here’s the magic—one day you’ll notice that you are good at it!

The negative statements will gradually disappear from your mind.

If you stick with this, what’s absolutely true is that:

“Whatever you can do or dream you can, begin it. Boldness has genius, power and magic in it. Begin it now.” ~ Goethe

The Art of Nurturing Self-Talk: How to Tell Yourself What You Need to Hear

Why Positive Affirmations Don’t Always Work (and What Does)