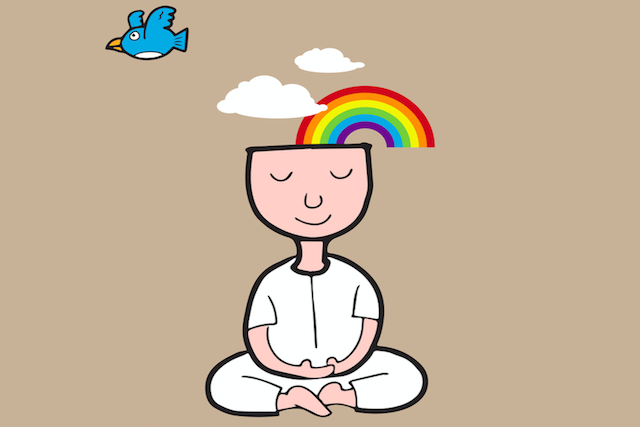 “Beware the barrenness of a busy life.” ~Socrates

In April, NPR ran a story titled, “The Slow Internet Movement.” It reported that hipster cities, like Portland, Oregon, are sprouting Internet cafés that only offer dial-up access to the web.

These cafés give customers, “Slow pours and slow Internet. Here, you can order your coffee and spend four hours checking your email, all for $.99 an hour.”

“Wow,” I thought.” That’s just my speed!” (No pun intended.) But the story didn’t just run in April. It ran on April 1st and was NPR’s little April Fools joke at the expense of gullible people like me.

It got me thinking, though. Life would be much less stressful if I embraced the spirit of the Slow Internet Movement. So, here are four tips for slowing down:

1. Double the time you think it will take to complete a task.

How often do you clock in at or under the time you’ve allotted for a task? I rarely do. Take my raised ivy geranium bed. Periodically, the geraniums spill over onto the walkway and I need to cut them back.

Every time I assess the task, I estimate it will take twenty minutes at most. But it always takes at least twice that long. By the time I’m done, due to chronic illness, I’ve used up my energy stores for the day. I’m “trashed” as we call it my household.

Inspired by The Slow Internet Movement, when I tackled the task a few weeks ago, I doubled my twenty-minute time estimate. Forty minutes is more than I can handle at one time, so I cut back half the geraniums on Saturday and the other half on Sunday.

Sure, the box looked odd for twenty-four hours—like half of a buzz cut—but no one seemed to notice. Not only did I spare myself burnout, but I truly enjoyed the activity both times.

Whatever you’re doing at the moment, slow it down by 25 percent, whether it’s thinking, typing on a keyboard, surfing the Internet, completing an errand, or cleaning the house.

This idea was inspired by a discovery I made in the 1990s when driving my ’85 LTD (nicknamed The Big White Boat by my kids). I realized that driving would be relaxing if I moved into the slow lane on the freeway and drove the speed limit.

There was no more worrying about having to pass cars because they were going as slow as I was; no one riding my bumper because it was acceptable to go the speed limit in the far right lane.

Unfortunately, this doesn’t work anymore because hardly anyone honors the speed limit even in the slow lane. In addition, traffic has increased to the point that I’d have to constantly dodge cars merging onto the freeway from onramps. So, on those rare occasions when I’m driving on a freeway, I’m back in the middle lane. But while it worked, it was a real find.

Now I’ve taken that “slow lane” mentality and applied it to other tasks by consciously doing them more slowly. But if I’m not vigilant, out of habit, I still find myself moving quickly. And this scurrying around is often for no apparent reason!

When I realize this, I take a deep breath, and repeat the 700 year-old wise words of Lao Tzu: “Doing nothing is better than being busy doing nothing.”

The two systems work together: as one becomes more active the other becomes less active. But they can get out of balance. Many people live in a constant state of high alert—or sympathetic nervous system arousal—even though there’s no immediate threat.

Three of the recognized causes for this are our fast-paced, never-enough-time-to-do-everything culture; sensory overload (exacerbated by multitasking); and the media’s distorted but relentless suggestion that danger lurks around every corner.

The following techniques for stimulating the parasympathetic nervous system are adapted from Rick Hansen’s excellent book, Buddha’s Brain. You can try these just about anywhere, anytime.

Korean Zen master Seung Sahn liked to tell his students, “When reading, only read. When eating, only eat. When thinking, only think.” To us, this means, no multitasking! I’ve discovered that it’s hard to break the multitasking habit; sometimes it feels like an addiction.

Mindfulness practice helps because unless I consciously pay attention to the present moment, I can find myself engaged in multiple tasks without even realizing it. Here are a few “multi-tasks” I’ve caught myself performing recently: surfing the web while talking on the phone, writing while trying to follow a movie in TV, composing an email while listening to an audio book and eating a piece of toast.

Too much sensory input exacerbates my symptoms, so I’m working hard on “no multitasking.” Call me a recovering multitasker. I’ve discovered that it takes a lot of discipline to break the habit, so much in fact, that sometimes I have to be content with “less multitasking.” But it’s a start.

These four tips are in the spirit of the Slow-Internet-Movement-that-wasn’t. I just hope that, in reading through them, you allotted twice the time you estimated it would take…

Toni is the author of the Nautilus Gold Medal winning How to Be Sick: A Buddhist-Inspired Guide for the Chronically Ill and their Caregivers. She can be found online at www.howtobesick.com

How Single-Tasking Can Decrease Your Stress and Improve Your Mood

How to Breathe Your Way to Inner Calm