How We Can Break the Cycle of Pain
By Joshua Kauffman 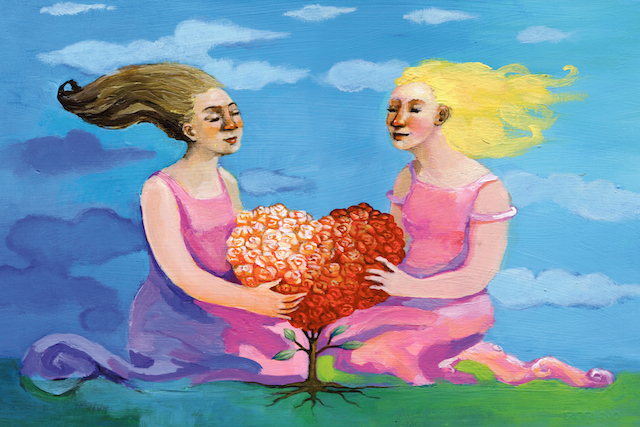 “Be the change you wish to see in the world.” ~Gandhi

Pain is and isn’t just like energy. According to the first law of thermodynamics, energy can neither be created nor destroyed but is merely converted from one form to another.

For example, the light energy from the sun can be harnessed by plants, which, through photosynthesis, convert it to chemical energy. Plants use this energy to grow fruit, which we eat. We store this energy for when we need to exert ourselves, when we convert it to kinetic energy. The energy never disappears, but is instead just displaced.

Pain is in a sense the same, creating a parallel to the first law of thermodynamics which I call the cycle of pain.

The manager is belittled by his boss because the boss was frustrated with the latest quarterly results, which disappointed because the customers were unhappy with the product. Upset, the manager comes home and mouths off to his wife, who is carrying her own tribulations from work.

The wife and mother then loses her temper with her son, who is hurt by his mother’s outburst. In pain and having witnessed a bad example from his mother about what to do with frustration, the son then goes to school the next day and causes a fight in the classroom during the teacher’s lesson.

His plans in tatters with the class disrupted, the teacher then exacts collective punishment on the whole class, who then each go and act out the negativity in their own separate ways.

The form of the pain changes, but it doesn’t go away—it’s spread out and perpetrated on new victims in a seemingly endless cycle of pain.

Except it can go away. After all, pain differs from energy in some important ways.

First of all, pain can be created, added to, and multiplied or increased exponentially.

Above, the frustration that the teacher caused can turn into sadness, hurt, or anger among his thirty pupils, who then have a negative emotional-energetic push to transfer and potentially increase the pain.

The story, however, isn’t all bad, and as conscious human beings we can actively work to stop the flow and creation of pain.

When the husband comes home to vent at his wife, the wife can always ask what the matter is, listen compassionately, and react with love and a desire to help ease the pain.

When the child acts out in school, the teacher can always take a deep breath, draw upon her compassion for whatever is driving an innocent child to be aggressive, pull the child aside, and try and find out what’s wrong.

We can all recognize that another person’s negativity is his or her pain, not ours.

This is very simple to comprehend but extremely difficult to achieve. It takes a lot of effort.

Put yourself right in the moment of a very tense or stressful situation. Your boss has had a stressful week and is screaming at you, blaming you for the entire team’s failure or something that had nothing to do with you. Your mother always favored your older brother and is interrogating you, asking why you didn’t get married and have the perfect job like he did. Pick a real example from your own life.

How did you react—with total serenity and compassion? Did you lovingly embrace this as a spiritual challenge and opportunity for growth? In all likelihood, far from it!

You probably shouted back, clamped down, cried, or otherwise reacted to negativity with negativity, and this in turn negatively affected someone else. Why? Because this is hard—really hard. And yet, it’s the struggle we, as human beings, face every day.

However, when we sit around and think about being our best, about trying to make a difference in the world, we think about legendary figures placed in the fulcrum of historic events. We think about Gandhi or Martin Luther King Jr. or Mother Theresa. Saving the rain forest, ending poverty, or finding a cure for some horrible disease come to mind.

In fact, very few people will ever even have the chance to be in the right place at the right time to make such a difference. Even if we had the skills and desire, we might not have the resources, the connections, or even be born is the right era to affect such a change.

By definition, not everyone can accomplish extraordinary things. The rain forest needs saving, poverty needs ending, and diseases need curing, but why not start with what you can influence right now—the world’s little daily hurts that, through the cycle of pain, create big problems?

But this is our bias, made dramatically worse in recent years by social media: to overlook or even look down upon the ordinary. And yet, it is the ordinary, everyday flow of life that is so difficult to navigate in a way that does no harm to ourselves or others. Indeed, daily life presents our most obvious opportunity to change the world around us—to end the cycle of pain.

Imagine a world where parents didn’t smack or shout at their children out of anger, where spouses didn’t take their work frustrations home and get passive aggressive with each other, where strangers didn’t project their pent up feelings onto each other.

Imagine all of the infinite little tragedies that could be avoided. Imagine the child who, in a moment of despair, sees a helping hand instead of a fist. Think of what a different place the world would be if one million or one billion people had this same thought all at once.

I, too, once had a head full of grandiosity, all the while overlooking the difference I could make each and every day.

Growing up in an affluent suburb of New York, I was raised like most of the other kids in my peer group—to be hyper-competitive and keep up with the Joneses. I wanted to be a famous academic, a CEO, or the president. I thought about ending wars, saving the environment, and changing the economy.

I was also short on patience. I punched back. I showed off. I overlooked people. It was only after I was brought so low by pain, when I saw no way forward, that I dropped my illusions and really thought about how to move forward in the world. When I felt there was no hope, I stopped contemplating the horizon and instead looked right in front of me.

For maybe the first time, I really saw the people who came into my life and got to know so well who had wronged me, betrayed me. Rather than cursing them or begrudging them, I thought about how they got the way they were—their being bullied or even molested as children or abandoned as adults (true stories!).

I thought about myself, put upon by my siblings and ignored by my parents. And I realized what a difference it would have made if even some minor character in any of these stories would have taken the initiative to break that cycle of pain.

Everything that happens in life is the result of an unknowable series of chance events that happened over centuries. You are here right now because some peasant in the fields a thousand years ago smiled at one of his fellow laborers or some seamstress took the risk of getting on ship bound for America or someone crossing the street didn’t get hit by a car.

Likewise, the gang member might not be in jail if that teacher had taken a chance on him. The cheerleader might not be bulimic if someone had taken the time to notice her eating habits or cared enough to say anything.

Even when we aren’t causing it, so many of us shut our eyes and turn our heads to other people’s pain because we’ve been hurt ourselves and don’t want to face more pain if we can avoid it.

To come to and maintain the level of consciousness necessary to actively counter the cycle of pain requires a spiritual vigilance that is profound and yet so simple. To break and not perpetuate the cycle of pain, to purify and not pollute our emotional environment is so mundane but can be so impactful. To me, this is what it means to be the change I wish to see in the world.

Once I recovered from the deep, crushing, suicidal depression that I suffered, I left my high-flying job. I moved countries. I extricated myself from destructive relationships. Coming from a life in which I interacted with senior politicians and CEOs, I instead dabbled in coaching and tutoring and other endeavors I saw as making a small difference. I slowed down and, instead of chasing grand visions, became much more conscious of what I was doing each moment.

This was a difficult transition to make, and it is a challenge each day to remember the cycle of pain and my role in it, and, more importantly, not to perpetuate it. Nevertheless, I find life so much more rewarding now. Though my path is littered with mistakes and small failings, most days I am able to see the incremental positive differences that I make.

I don’t know what all of this will amount to, but what I do know is that I feel so much more rewarded and empowered.