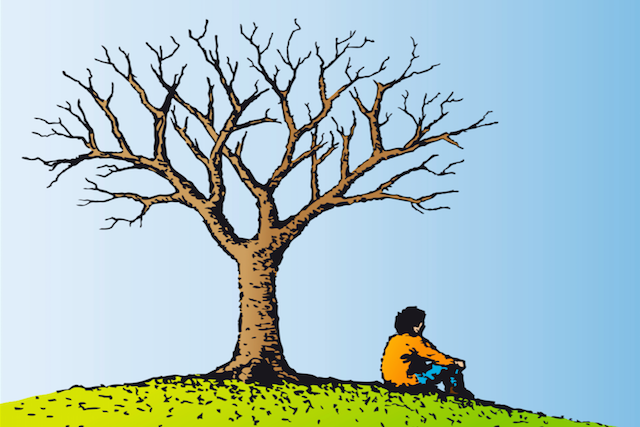 “People are so caught up in their own negativity and losses that they give up on creating the future they want.” ~Grant Cardone

I have a friend. Let’s call him Ram. Ram is always angry because of the cards that he was dealt in life. He comes from a middle-class family that has no money or inheritance. He got a decent education but couldn’t go to a better college because his parents didn’t have the money to fund it.

He’s disappointed that his education has limited his opportunities. He’s frustrated that he has to spend money on public transport while others drive in their swanky cars. To him, it feels like the entire world has conspired against him to ensure he doesn’t succeed.

What Ram doesn’t realize is that most of us have been dealt less-than-ideal cards, and it’s up to us to make the most of what we have.

For Ram, everything that he’s suffering through, or has a problem with, is not under his control. He’s angry, frustrated, disappointed, and sad because, according to him, he is not responsible for any of his problems!

Ram has what you would call a victim mentality. For a victim, everything is someone else’s fault and nothing is under their control. Every obstacle is a problem instead of an opportunity.

Every time we suffer a setback, we think:

Why me?
What did I do to deserve this?
Everybody is out to get me.
I cannot do anything right.

But every time we suffer a setback, we have a choice to reframe our thoughts to:

I was not up for the task.
I was lacking somewhere.
This is a good opportunity for…
I will be better prepared next time because of this.
Now I know what not to do.

Can I be completely honest with you?

Ram is a pseudonym I created. Ram is me. I am Ram.

I get into the victim mentality very easily, because that’s easier than taking responsibility for my life. For four long years, I rejected the cards that were dealt to me because I felt that I didn’t choose them, so I could just ignore them.

I tried to distance myself from my parents and avoided going home for as long as I could because I blamed them for everything that was lacking in my life.

I’ve read a lot on self-help and personal development, so I don’t know exactly when the switch happened or why, but sometime in the beginning of 2015, I realized that running away was not going to get rid of the cards I was dealt, so I needed a different strategy.

So I decided to listen to Marcus Aurelius, who said, “Reject your sense of injury and the injury itself disappears,” and pack my bags to relocate back to the motherland—back to where it all started.

It’s easy to look over the white picket fence and think that the grass is greener on the other side. We’re quick to assume things, to create this image about others, thinking their life is perfect when that’s far from the truth! We all have things we wish we could change, but like it or not, much is beyond our control.

When we measure ourselves on someone else’s yardstick, the yardstick tends to be very short because we are only looking at what we lack and wishing we had it. We completely ignore all the things that might be going our way.

In my case, I was overlooking the fact that I had a college degree, a roof over my head, parents who loved me, a job that was satisfying to varying degrees and helped me pay the bills, and colleagues who were friends at this point, who cared for my well-being. More than anything else, I had mental peace—when I wasn’t dwelling on everything I lacked.

When we spend our time wishing for something we don’t have, we waste time that could be used for either accomplishing something or getting us closer to actually having that something we want. You can complain and cry about how things are unfair and how other people have it easier, or you can get to work.

Benjamin Hardy hit the nail on the spot when he wrote, “Most people wish that their circumstances would magically change for them. They don’t have a desire to become better themselves so they can proactively improve their circumstances.”

I had tried avoiding and running away from the cards dealt to me, but it hadn’t occurred to me that I was actually missing out by shunning my family, my friends, and my culture. So this time, I decided to embrace my cards and work with them.

And boy did that make a difference!

I’d missed celebrating the festivals, wearing Indian outfits, getting my elders’ blessings, smelling all the street food, and playing on the streets. I was slowly losing my ability to read and write in my mother tongue, which scared me. So, for starters, I decided to reconnect with my roots.

The festivals reminded me of the fun I’d missed out on, while the street food brought back a lot of great childhood memories. Attending religious ceremonies and weddings reminded me of the importance of having a close-knit family. Reconnecting with my cousins and old friends made me realize that we all have our own flaws and we are all trying our best to live with them.

The biggest change, however, was that I began to recognize the sacrifices my parents had made to ensure I got a good education and the right values growing up—moving to USA in their forties so that my brother and I could have a better life, working late hours to provide for us, giving up on their wants to fund our education.

Yes, they were lacking in many departments, but realizing that they didn’t have much help and were figuring things out themselves was the shift in perspective I needed.

As I started to work with what I have, I was able to leverage that instead of always wishing that I had a completely different deck.

I started to lean more on my family. Instead of thinking of them as the weak link, I began to leverage their connections, their experiences, and their advice. I began learning how to navigate the complex web of human relationships.

It was the beginning of a different relationship with my parents, because by seeking to understand where they come from and why they do what they do, I had begun to respect them and earned their respect  in me.

I started reconnecting with old friends, who exposed me to interesting people and experiences, and in doing so, strengthened my relationship with them. For the first time, I was able to give back by being present and helping instead of being away and wishing I was present. Overall, this gave me immense satisfaction and mental peace.

I slowly began to return to myself—to remember who I was before I decided the world had wronged me.

Moral of the story, as Arthur Ashe wrote:

“Start where you are. Use what you have. Do what you can.”

My favorite indian word is Jugaad. Translated to English, the shorter version means “resourceful,” while the longer one would read, “Doing the best with what you have.”

If you are stuck and unhappy, maybe it’s time to accept the cards you were dealt, because acceptance is the first step toward happiness.

There would have been no Helen Keller if all she did was rue that she was deaf and dumb. Instead, she decided to accept it, and years later, at a time when very few women were even attending college, she graduated. Not only that, she authored six books while co-founding the American Civil Liberties Union.

Helen Keller is may be a famous example, but she is not the only one. Every day I see people accepting and playing their hand instead of wishing they’d been dealt other cards. They might not have everything, but they’re doing everything they can to make the most of what they have.

If they can do it, so can you! I promise you won’t regret it.

Tuseet Jha is just an ordinary boy next door who is trying to deconstruct and demystify life one thought at a time. He usually writes about happiness, productivity, minimalism, and success on his blog. Connect with him on LinkedIn and follow him on Medium and Instagram.

A Simple Way to Calm Yourself When Feeling Strong Emotions