The Key to Happiness: Compare Less, Be More
By Dan Elias 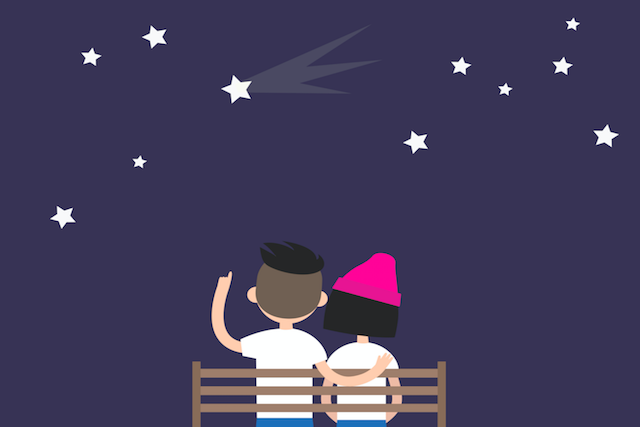 “Happiness is found when you stop comparing yourself to other people.” ~Unknown

Stepping off the bus I was in shock.

This tiny thing? With no doors in the doorways and no glass in the windows?

This little place? With walls that looked like they were lone survivors of war?

I would’ve been sure it was abandoned if it wasn’t for the hundreds of little footprints on trampled soil making up the floor of the school. A giant field with two erect logs on either side served as goals for what was supposed to be a gym. I always thought these types of experiences were supposed to make you feel grateful for what you have. Yet what happened that day made me feel poor.

Today we were painting a school in northern Costa Rica. As the second bus pulled up, children flooded the campus. Brushes in hand and paint cans open wide, the workday began. Even though none of our group spoke Spanish, communication flowed effortlessly.

Stroke after stroke, the diligence and level of attention of these kids was inspiring. Yet what struck me the most was how happy they were. It was as if they were not even aware their school didn’t have a floor. I couldn’t understand where this abundance of happiness was coming from until I met Luis.

Somewhere between his broken English and my broken Spanish we bridged an understanding. I asked him about his life and he asked bout mine. I was stunned when he had no idea what New York was. How could he not know New York? I tried to explain, but our language barrier made it hard to paint a picture. Moving from words to gestures, back to words, I was like a mime trying to act out a song. These kids were truly happy in a way that I never saw kids in the states be.

Then it hit me.

What his family lacked in their bank accounts, they made up for in happiness.

These people did not check their Instagram feeds, spending hours a day comparing their lives to people they never met across the world. Everyone around them was relatively on the same economic level.

These kids prioritized relationships and time outside, not their cell phones or game consoles. Their expectations were low and enthusiasm for life high. They were rich in every way I wasn’t. They were happiness millionaires with no credit limits on their joy.

Taking it With Me

Life isn’t made up of many big decisions, but the compounding of thousands of small ones. When looking at our credit card bills, these decisions are easy to see, but most of life doesn’t come with such a transcript.

I couldn’t reprogram my mind instantly, short of hitting myself over the head and hoping to forget the world I knew. I wondered what small, compounding changes I could make in my life to be more like Luis. If I could identify the moments in the day where I compare myself to others and minimize that, could my happiness level rise?

I decided to run the experiment.

After spending three days being hyper aware of all my actions I found, on average, thirty-seven instances a day where I compared myself to someone else.  Here was the breakdown where these moments occurred:

58 percent: While on social media

33 percent: In the world (going to work, from work, shopping, etc.)

10 percent: During a conversation with another person

Seeing things broken out like this was eye opening. This task went from overwhelming and impossible, to actionable and realistic.

My Results and Action Plan

Even though this made up a huge percentage, I was never one to be on social media for hours a day. However, I noticed that in just one session I could rack up multiple counts of comparing myself to others. To combat this, instead of turning off social media, I changed who I was paying attention to.

Any celebrities that added nothing to my life except their flashy lifestyles were unfollowed, deleted, and replaced by more useful content. Most acquaintances that I didn’t really know well were also removed. My feed became a mixture of close personal relationships and cool interesting things I could learn from.

These two were much harder to combat. Yet while the solution to cutting them out was far from easy, it was quite simple. Since I could not prevent myself from getting these thoughts, I would use the notepad on my phone and record the instances after they occurred. After noting each occurrence, I would write, “Compare less, be more.”

In about two weeks something strange began to happen.

Not only did I see a dramatic reduction in my count, but now my brain would catch itself. Right as I was about to compare myself to something or someone, the principle would play in my mind instead, “Compare less, be more.” This would instantly break my thought pattern and put me back into the present moment. This wouldn’t happen every time, but it happened more and more every week.

After one month I noticed a dramatic increase in my happiness. I conducted the experiment again and found the number of daily comparisons were reduced to thirty-seven to nine.

Ultimately, much of our unhappiness comes from us looking onto others’ greener grass while neglecting our own yards. We focus on comparing and competing instead of creating and being. Not having a Ferrari does not make us any less, but constantly reminding ourselves we don’t have a Ferrari absolutely does.

When we attach our self-worth to anything or anyone, it’s no longer ours. We limit the flow of ideas and range of action as we approach life from a state of lack.

The next time you find yourself being obsessed over something you don’t have, just remember to compare less, be more. Maybe one day we can all be as rich as Luis, the richest kid in the world.

Dan Elias is passionate about helping people develop creative strategies for unlocking their potential. He is the marketing director of Motivate, an app dedicated to helping people achieve their goals. https://getmotivateapp.com

5 Tips to Stop Making Comparisons and Feeling Bad About Yourself