Lashing Out is Losing Control; Calmness Is Strength and Power
By Richard Kronick 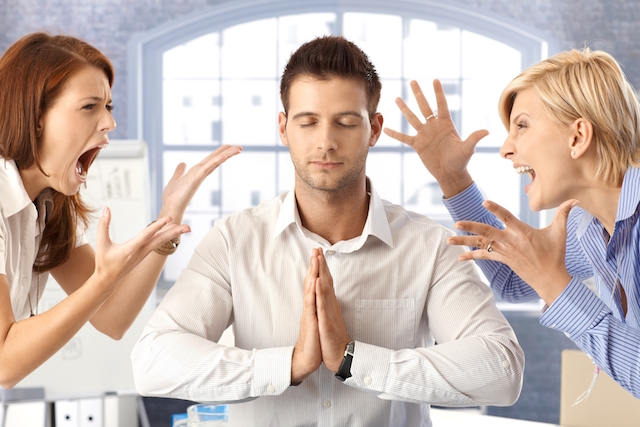 I would like to share something personal with you. It’s the story of how I first glimpsed what true strength and power is and where they come from. I hope this story helps to further illuminate your journey through life.

I remember one day when I was in the back seat of my parents’ car. I was probably about thirteen years old. We were parked in a hotel driveway, waiting, though I can’t recall why.

After a few minutes, another car pulled up behind ours and the driver began to impatiently honk at us. Soon he began to scream and curse as well. I turned and saw a man whose face was bright red, scarred deeply by wrinkles of rage and bitterness.

The driver had obviously lost control of his emotions, as it was impossible for us to go anywhere with his car blocking us in. It was as clear as day that we were stuck until he moved. What on earth did he want us to do?

My father sat in the driver’s seat, gazing into the rearview mirror. His face was strained with confusion, trying to figure out how to process what was happening.

My father is a great man, always striving to do what is right, strictly honest and keen to help others. Finally, somewhat frustrated, my father opened the door so he could go and speak with the impatient man in the car behind us.

I remember feeling afraid when he stood up because I knew that the other person was really angry.

I watched my father begin to walk toward the other car. As the car horn continued to blow, my father abruptly stopped and paused. He seemed to be contemplating something, and it appeared as if his entire being softened.

Slowly, he returned to the car and sat back down. My father’s expression was one that I had never seen before on him: a look of straining and struggle with a hint of shame. Eventually, the other man drove off and that was the end of the incident.

The image of my father’s face profoundly affected me and was forever tattooed in my memory. I was just a young child and, in my mind, my father was perfect. He was my hero and I idolized him.

He is not a large man and I have never known him to fight; yet I felt a tinge of disappointment that he hadn’t stood his ground and confronted the other man. I felt that he had retreated. And my impression was that he felt the same way.

A few days later my father shared with me a dream that he had the night before. In his dream, I had beaten up the man who was honking the horn.

At the time, despite being young, I was a black belt in Taekwondo. I remember wishing that I really had beaten him up. I wanted to get even with the man who had embarrassed my father.

I became full of anger. I imagined myself beating him up again and again yelling, “This is for my father!”

Something deep inside me was forever changed.

Years later, as a college student, a friend and I went out for a meal. While eating, an acquaintance of ours lost his temper and began yelling at my friend. My friend listened silently, showing no change in his demeanor.

Eventually, the man finished yelling and my friend quietly stood up and walked away without saying a word. I was so impressed by how calm he was.

Later, I asked him how he managed to keep his cool. He smiled and told me, “A strong person is not one who knocks other people down; it is one who does not let his anger get the better of him.”

I was stunned. I knew that he was completely right. Who demonstrated more strength: the person who had lost control of his temper or my friend who had kept his?

These words touched my soul and aroused in me an understanding of where true power comes from: it comes from within. And inner strength dwarfs physical strength.

That night, this realization lingered in my mind. As I was digesting this lesson, suddenly I remembered the incident with my father and the horn-honker, many years before.

A voice within me asked, “Who was the stronger man?” and chills slowly crept up my spine as I realized that it was, in fact, my father. While the other man had allowed his rage to overcome him, my father had controlled himself.

The other man had lost; he lost to himself when he allowed his emotions to take over. My father, on the other hand, had stood victorious over himself, conquering his own emotions, commanding them down. The other man was a slave to his passions; my father was the master of his.

It was then that I saw my father for the truly strong and courageous man that he is. The weak and easy path would have been to return anger with anger, yelling with yelling. But my father had the strength to resist this; he had the power to calm his mind while a tempest raged about him.

It was in this moment, that my own path became a bit clearer. I realized that I must embark on a journey of conquering myself, because I now knew that I did not want to be a slave. The only other option was to master myself, to command the hidden forces within.

When you feel negative emotions rising, threatening to overcome you and make you into their puppet, remember that the strength and power needed to maintain calmness lie forever within you.

Richard Kronick is an author, teacher, coach, speaker and Huffington Post blogger. His mission is to give you practical tools and insights to unleash the massive hidden power within you to transform your life.   Visit his blog (completedthoughts.com) to read more and get a free copy of the eBook, 20 Transformational Life Hacks. Or read more from him on the Huffington Post.