Letting Go of Stubbornness: Appreciate Your Loved Ones While You Can
By Shawn W. Larson 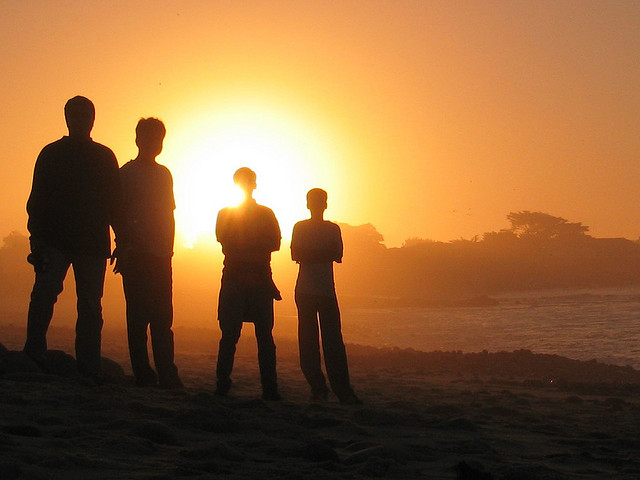 “Before someone’s tomorrow has been taken away, cherish those you love, appreciate them today. “ ~Michelle C. Ustaszeski

My brother Greg and I were the closest of friends growing up, even if you weigh in the occasional tiff or disagreement we sometimes had.

We discovered our favorite toys together as kids, rode bikes side by side, and conquered video games as a two-man team. Even well into our teenage years, we were an inseparable pair, always looking out for one another.

The fact that our father died of a brain tumor when we were young had forged a deep understanding between us. I remember us crying together in our mother’s arms when we got the news, soaking her chest with tears. We both knew without saying a word that we’d need one another to lean on in the years to come.

One day Greg and I were out in the woods in the wintertime with our grandfather and uncle when we happened upon a small river. A collapsed tree had fallen over it, which offered the only visible means of crossing. So with the adults behind me and my brother in front, we set about making it to the other side.

Somewhere around the halfway point, Greg slipped and fell into the river. Instinctually, I yelled out, “Hang on, Greg! I’m coming!” and immediately dove in after him. Once in the river, I was able to lift him back toward the fallen tree, where Grandpa pulled him the rest of the way up, followed by me.

The river might not have been deep enough to drown him, but it didn’t really matter to me. My brother was in trouble, and the last place I wanted to be was out of his reach. Jumping in with him put us both in the same predicament, fighting our way out together—the same as it was when our father died.

And Greg more than returned the favor one day, when a kid from the neighborhood pulled a bow and arrow back at pointed it at me. Without even hesitating, Greg stood directly in front of me and said, “If you’re gonna kill my brother, you have to kill me first.” The kid slowly released the bow, dropped his arrow, and ran away.

Two Of A Kind

We were cut from the same cloth, my brother and I. Our love and courage for one another knew no limits or bounds. But like most brothers, we often found ourselves at odds over the most trivial of things.

We argued about toys, had screaming matches over who would get to keep the prize from a cereal box, and even punched each other out once over a video game.

Being cut from the same cloth could also mean a mutual stubbornness during disagreements. And though we always seemed to work things out, a day arrived when we would no longer have that luxury.

Pain Is A Teacher

Greg and I were going through another one of our tiffs in the fall of 1997 (we weren’t exactly burning mad at each other, but we hadn’t been speaking much, either), when I was awoken by a phone call from my grandmother one morning.

She told me that my brother had been hit head-on by a drunk driver the night before…and was killed instantly. I couldn’t believe what I was hearing.

After I hung up the phone, I screamed and wailed for nearly two hours straight. I just couldn’t articulate my pain any other way. There was such a strong bond between me and Greg that I felt like half of my body had been cut in half.

And on top of the pain of losing him, I was reminded of that one final argument we never got to resolve. It took me years before I stopped thinking about it and began to appreciate the valuable lesson life had taught me.

I’m a lot more cautious these days about leaving things unresolved with people I love, or with anyone else for that matter. Life is short. We’re all given a set amount of days in which to enjoy this life and appreciate one another—and none of us know just how much time we actually have left.

Today is the time to work out our differences and disputes with the people we love, and to ask ourselves an important question: Is my stubbornness really worth it? Is it possible that I’ve been making a big deal out of something trivial—a position that I’d feel awful about if this person died tomorrow?

I hear stories all the time from people who never got to tell a parent how much they loved them before they passed, and even siblings who never buried the ax before it was too late. Regret is one of the hardest things in the world to live with.

Challenge yourself to resolve an issue with someone you’ve been feuding with for a long time, especially if it’s a family member or friend. Let them know they mean much more to you than your old stubborn position in a past argument.

Shawn W. Larson was once a hip-hop producer and recording engineer who worked with some of the most notable names in the business. Today, he is married with three children, and enjoys writing, photography, and meditation.

The Power of Focus: Directing Your Life with Intention