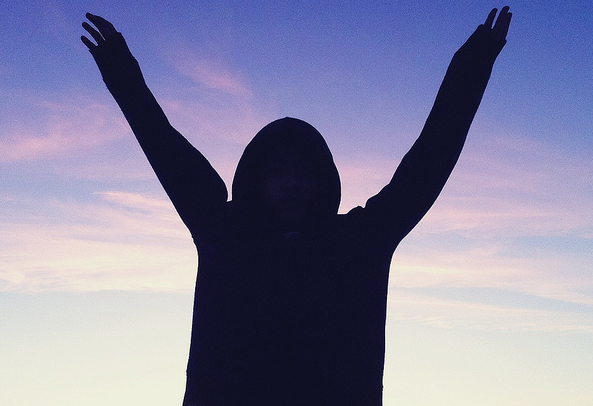 “Don’t be afraid to go out on a limb. That’s where the fruit is.” ~H. Jackson Browne

When I was fifteen, I “died” for about a minute or so and then came back to life. A very severe case of bronchitis that lasted for over a week caused my brush with death. What complicated the situation was my allergic reaction to one type of medicine.

There was bright light, lots of love, and a huge reluctance to come back. I tried to negotiate with the dude in charge about letting me stay, but he told me I was still needed and that my time was not up.

He told me a few more things about my life, things that were too private to share. Interestingly enough, they all came true.

The last thing I remember before coming back was that I saw my body in bed, and I remember thinking that I looked so peaceful. It was kind of weird to see myself from the ceiling of my bedroom and to watch what was happening as if it were happening to someone else. I then opened my eyes, and life as I knew it was never the same.

Prior to this experience, I didn’t have much awareness of death. I knew that it existed but it didn’t seem like it would happen to me any time soon. It was like a distant relative that I knew I would meet in the future, which was many years away.

My childhood was bad for a variety of reasons. When I was born, I had a defect that made my head look like it was on crooked. Kids made fun of me daily.

When I was nine, the defect was corrected but the scars of the pain remained. To complicate matters even more, I was the first ethnic kid in a neighborhood where racism was rampant.

As a result, I didn’t like going to school. I went through most of my days complaining or lamenting about how miserable things were. When I first got the case of bronchitis that practically killed me, I was happy because it meant that I could stay home from school.

Things changed when my bronchitis finally went away. I began to live my life on full throttle.

The awareness that there was such a thing as dying made me value living. I began to view my life as this wonderful journey, and I wanted to make the most out of every single moment. My goal was that when my time would end, there would be no regrets for not living life to the fullest.

So with this newfound philosophy I did whatever I wanted. Many people in my life weren’t pleased.

The thing about surviving death is that you no longer have any fear or concern about perceived limitations. The worst thing that possibly could happen is death. Being that I saw it, I wasn’t scared of it. So whenever someone would try to talk me out of an idea or discourage me, I ignored them.

This only brought me more problems with people.

My friends’ parents thought I was a bad influence because I had all these crazy dreams, such as traveling the world. I didn’t see life has being one big burden of responsibility. I saw it as being an open invitation to do what my heart felt like doing.

I wasn’t a bad kid. I didn’t drink and I didn’t do drugs, but I was daring when it came to what I wanted to see and do in life.

I would talk of going to see various parts of the world and all the wonderful experiences I wanted to have.

Many people accused me of being unrealistic and a dreamer. They were determined to have me conform but I was determined to live life on my terms. I found it strange that people thought my dreams were a bad thing. How can being a dreamer be a negative? I never could figure out the answer to that question.

When high school graduation came, it was a blissful day. I felt free—like the world was waiting for me.

So I did travel the world. I’ve been to five out of the seven continents. I experienced all kinds of jobs based on what felt right at the moment. I have been a secretary, a data analyst, a graphic designer, a lawyer, and a make-up artist. Throughout it all, I’ve consistently worked on my passion, writing.

I’ve known all kinds of people. I’ve seen it all just like I wanted. My life hasn’t been very structured but rather like one big squiggly line. I’ve been all over and it made me a better person.

If my life were to end now, I would have no regrets. I lived it based on my terms. I often think that if I didn’t have that near death experience, my life would have been quite different.

That is the irony about going out on a limb; it can be lonely at times, since many people are scared to go after what they want.

Many people want to play it safe and do the “right” thing. Many people want life to be reduced down to a formula. The beauty of life is that there is no set formula. Life is what you make out of it.

Even if it’s lonely because not many people will be out there with you going for that fruit, when you reach the end of the branch and grab it, the journey will make it taste so much sweeter.

Nothing of value in life comes easily. You have to give in order to get. If you have dreams, by all means go after them. No one can hold you back. No one except yourself.

Nadia Ballas-Ruta maintains her own blog at http://www.happylotus.com/, and is a regular contributor here and at Elephant Journal. She is a free spirit who believes in being happy & green and eating as healthy as possible. You can follow her on Twitter @HappyLotus.

7 Ways to Know If Your Sacrifices Are Worth It