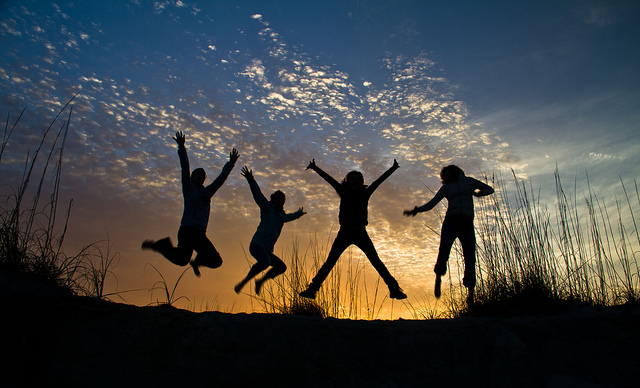 “I have learned that to be with those I like is enough.” ~Walt Whitman

It’s almost as if it can’t be helped. When things—family, friends, health, amenities, or money—occupy a place in our lives for years, we naturally begin to view them as commonplace; we assume they’ll forever be, just as they’ve always been.

Yet this mindset—this “Oh, of course that’s there; that’s always been there” perspective—often seems to prevent us from realizing how much it would mean to us if that something wasn’t there anymore.

In August of 2013, I moved to Busan, South Korea to teach English for a year to a bunch of elementary school kids (lovable rascals, these kids). Three months later, I can tell you that this experience has been everything I imagined and about 10,000 things I didn’t.

For a while it was similar to what I’d envisioned—like freefalling through some sort of mythical dreamscape. Everything new and interesting, bright and foreign, so much happening, so much to learn, so much to take in. It was experiential overload, at once intimidating and blissful.

After a few weeks, though, the feelings of novelty and adventure began to wane slightly; a discord had been created.

My romanticized visions of my new home were coming into conflict with a feeling I’m sure most of you know very well—the slog of routine, the all-too-familiar, the grind.

What happens is this: you begin to get used to the new country; it loses a certain sparkle. You start to notice its flaws, its funny odors, its unsexy idiosyncrasies. You realize that a full-time job in a foreign land is still a full-time job, except 95% of the people around you don’t speak your language.

You realize, “Wow, I’m going to be gone for a while—a whole year! And I’m going to see exactly zero people I know. Nada. None. For 12 months. Oh.” In terms of culture shock, you’re experiencing the end of what’s known as “The Honeymoon Phase.”

I didn’t. Not really, at least. Turns out it was near-impossible to know what an enormous decision it was to move to a foreign country until I was two months in and questioning what in God’s name I was doing here.

As someone who usually enjoys solitude, I’ve been surprised at how lonely I’ve felt at times. You discover a special kind of alienation when you’re in a city of five million people and can’t communicate with anyone. It’s easy to dissociate yourself from your surroundings.

You start talking to yourself. You feel like you don’t exist. You end up shouting to the music in your headphones (“People will know that I’m here!!”) while walking down the sidewalk as you’re drenched head-to-toe and getting wetter by the second because, as you just found out, there are typhoons here. (Okay, maybe that was just me).

It’s during those periods that you realize you’d trade your big toe for a few days at home with the people you’ve known for years. To do nothing but laugh a few hours away with those irreplaceable personalities whom you know about as well as your own reflection.

Sure, you can “connect” with loved ones via Facebook, Twitter, Snapchat, Gmail, and a trillion other online mediums. You can even indulge in a pretty convincing illusion of face-to-face conversation with Skype or a Google Hangout.

But as you do, it becomes clear that these substitutes can never duplicate a sizable bear-hug, or an eye-contact-followed-by-uproarious-laughter moment, or the glorious interplay of energies when you’re actually in the same room with people.

While living in Korea, I’ve realized what an invaluable gift I sacrificed to come abroad—namely, being a car ride away from most all of my favorite people in the world.

Before coming here, I’d known that I loved my family and friends endlessly—that they meant everything to me—but I don’t think I quite realized the extent to which being near them and being able to see them were vital to my well-being (and sanity).

I feel I’ve gained a renewed appreciation for those precious people who’ve been there for years and will continue to be.

When I do return home, I’ll love them just the same as before, but I’ll truly cherish the time I get to spend with them. I’ll try to remember what it was like without them.

Simply imagine for a few moments what it would be like if all of the people you loved were just gone, so far away that you couldn’t see them. It’s likely difficult to put yourself in my situation, but my hope is that you can sense it—how you would miss the familiar comfort of just being with them, of just sharing a space or a smile.

One wouldn’t think that the good things in our lives need to disappear in order for us to understand their worth, yet so often this is the case.

It seems a bit of a paradox, that what is nearest our hearts can be hardest to see. I humbly submit to you that we ought to be attentive to what lies just below our oblivious noses, lest we recognize the value of things only after they’ve left us.

I’d be a fool (more so than I already am) if I didn’t understand that this don’t-take-things-for-granted spiel applies to me right this moment.

In a few years, I’ll look back on my time in Korea and know what an incredible opportunity I was given and how much was here to love.

If I overlook the wonders that surround me in this place and constantly pine for my home, I’ll set myself up to feel only a sort of wistful gratitude later on, when all that remains of my time abroad are patchwork memories.

So while I now grasp more fully what I left behind to come to this country, I’m focusing on remembering that I came here for what I couldn’t find at home—a different environment, new friends, fresh perspectives. And those things are all around, plain to be seen, so long as I’m not looking through them, at what isn’t here.

I’m reminded of a sentence Vonnegut once wrote: “A purpose of human life, no matter who is controlling it, is to love whoever is around to be loved.” I like the whoever especially, but I’d also add whatever, wherever, whichever.

In the end, it seems, loving what’s right before us does far more good than hating what’s missing.

I’m not always keen at seeing what’s near to be loved (so it goes), but here’s to looking a bit closer. Here’s to noticing the important things, before they’re no longer there to be noticed.

Jordan Bates is a tenacious fellow who loves novels and freestyle rapping. He's a writer and activist who’d like the world to think more and fight less. You should check out Refine The Mind, his online treehouse.

When You Fear Making the “Wrong” Decision

Finding What We’re Missing: Our Lives Are Already Complete

What to Do When Someone You Love Is Sick and Struggling