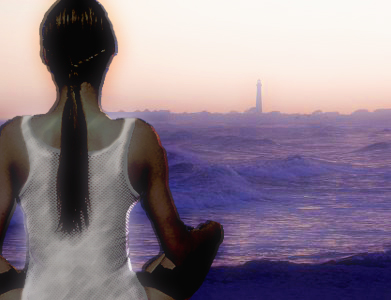 If you’d asked me about money five years ago, I would’ve said, “Oh I’m never going to have money.” On the surface, this sentiment didn’t bother me. I have a job I love and a great marriage, so who needs money?

Over the years I’ve realized, however, that everyone needs money. You have to have a place to live, food, clothes, and a chance to have fun.

So one day I decided that just enough wasn’t enough anymore. I wanted more money but I’d always thought of myself as a poor person. How do poor people get money? I didn’t want to change jobs or start a new career or move to a different city.

To answer that question, I first had to know how much money I was spending each month. I sat down with all of my monthly bills and expenses and added up the columns. I found out what I already knew: I was spending more money than I make.

It was no wonder that I was in debt. So I took a two-pronged approach to the problem. First, I was going to erase debt, and second, I was going to have more money in my life.

Erasing credit card debt is not as hard as some people believe, but it’s also not a quick and easy process. As you might expect, it may take almost as long to erase credit card debt as it did to build up. If you’re drowning in credit card debt, you might consider a step like bankruptcy because that is the way to legally erase debt.

My situation wasn’t that bad and I wanted to feel the pain of paying back the debt dollar by dollar. I knew that would be the only way that I would learn to manage my money better. I needed to take the journey of becoming debt-free, step by step.

So when I sat down with my monthly bills, I took a hard look at those credit card statements. I tried to remember what all the charges were for and I couldn’t do it. Why had I spent $49.87 at Macy’s? No idea.

I read about a concept called the debt snowball and I thought this would help me. It’s a simple concept: you look at your budget, your bills, and your monthly expenses and see where you can scrape together an extra $50 or $100. That money becomes the start of your snowball.

You pay the minimum payment on that small credit card balance but in addition you add that extra $50 or $100. Every single month on that one credit card, you put that extra money towards the balance.

So for instance, maybe now your debt snowball is $150 thanks to the original hundred dollars and the $50 minimum payment that you are making on that first credit card. Every single month you apply the debt snowball amount to the credit card and it just slowly eats away at that credit card balance.

That’s the first part of the solution. The second part is to actually have more money in your life. For me, this was as simple (or it became simple over time) as paying attention to where every single dollar goes.

I had never been a conscious spender before. Money flowed through my fingers all too easily. My new money consciousness said that I needed to pay attention and literally name every dollar in my bank account. So I sat down and created a written budget for the first time in my life.

That doesn’t sound like much but very quickly I had a little cushion of savings. And after a few months of living with this budget, I realized that I could cut a few other things and have a little bit more money in savings.

By living mindfully in this way, I find that I feel rich for the first time in my life. I have money in the bank. My spending is under control. I am almost free of credit card debt. And most importantly, I don’t use credit cards anymore at all.

I used to use things to make me feel better about the problems in my life. But now that I have my life under control, I don’t need those things, not in the same way. I think that’s been the greatest gift that this journey has brought me—learning to live simply and loving it. For the first time in my life I have more than enough. I am truly blessed.

Beth is a bookseller by trade. She writes about life, love and money at LifeVisions.

Simplify Your Life by Eliminating These 7 Problems