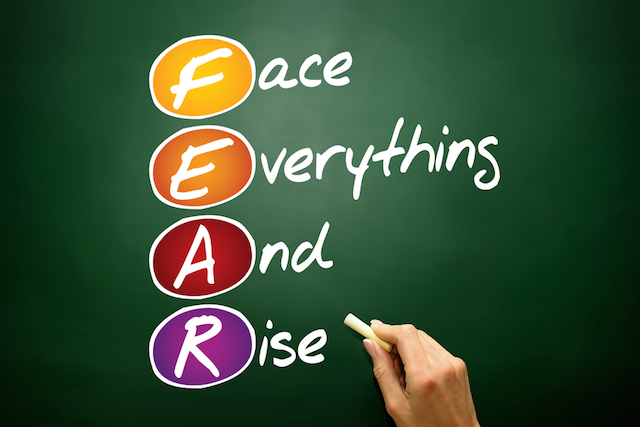 “Only when we are no longer afraid do we begin to live.” ~Dorothy Thompson

Swarms of mosquitos puncture our skin every summer, flies are everywhere, we’ve got spiders bigger than my hand, our magpie birds swoop and peck at our heads during spring, and don’t get me started on the sharks and crocodiles and those mighty big bites.

I am most scared of the snakes. Australia has twenty of the top twenty-five most venomous species of snakes in the world. We have a hundred and forty species of land snakes and thirty-two species of sea snakes. That’s a lot.

I grew up in the Australian bush. My family had a small property that was covered in trees and long grass.

Throughout my youth my parents and others constantly reminded me that I had to be watchful and careful of animals that bit, pecked, or did other horrible things, particularly snakes.

If we were walking anywhere outdoors, it was important to make noises to scare snakes away. I sang, whistled, and stamped a lot and saw almost every stick as a potential snake. The longer the grass, the more noise I made and the more I watched for any movement.

It didn’t help that when I was very young my parents had a bonfire. It was dusk and I trotted over to the fire, all happy and youthful, and a black snake reared up in front of me.

I’ve never forgotten the shiny eyes, the glisten on its scales. It was absolutely terrifying. We stared at each other for a moment and then I employed a bit of first class noise creation by screaming at the top of my lungs, and it slithered away.

Dad also used to tell stories of growing up in country Australia in a big old house with snakes everywhere.

One his favorite stories was of the time he walked into their outdoor toilet and got a big shock when he saw a two meter long brown snake curled up on the floor enjoying the afternoon sun.

The toilet was a bench of wood with a hole, and because there were so many snakes, Dad was in the habit of crouching over the hole rather than sitting on it for fear of snakes biting his bottom.

It didn’t end there. There was also a small island on the lake in front of where he lived called Snake Island, and it was apparently infested with them.

I’ve seen Snake Island and it’s covered in long grass and bushes, the perfect holiday destination for slithering scary things. Oh yes, and the big brown snakes could swim, yes, swim. That’s how they could go on their holidays to the island.

Can you imagine how much I loved hearing these stories, as every kid loves a scary story, but also how much these and other snake stories impacted a child with a very big imagination?

It didn’t help that snakes were spotted on the property every now and again. As I grew up and throughout my adult years I never stopped watching for snakes in the bush. That’s a long time to be scared of the outdoors.

The Camping Trip & the Confrontation with the Slithering Things

Two months ago I went on a camping trip with my family. We were camping at a remote dam surrounded by beautiful arid bush, lots of gum trees, crickets buzzing, rough ground, and dare I say it, lots and lots of sticks. A gazillion sticks, actually.

After the sun set over the lake and we’d eaten apricot chicken in front of a campfire flickering away in a rusty old bin, I took my torch and proceeded to walk the five minutes in the darkness to the toilet block to brush my teeth.

My snake routine started again: torch flashing over ground, eyes seeing long thin objects, stamping my feet as I walked, some humming. It didn’t help that my torch was dimming and nearly out of batteries.

There were shadows and movement everywhere and so many sticks. These sticks could bite me at anytime and inject me with deadly poison, and our campsite was far from medical help.

And then it happened. I hadn’t camped in a while or been out in the bush in a while. I had been through a period of my life where I had suffered terribly from an illness and had faced many fears and had overcome many of them. I was in the habit of facing things head on.

I thought, “What’s the chance of being bitten out here? Had my father who had basically lived in snake kingdom in his youth ever been bitten? Had anyone I know, any friends of friends, anyone, ever been bitten?”

I watched myself looking over the dim ground. I watched my brain wanting to invent snakes, seeing movement when the only movement was the shadows cast by the torch and the wind in the gum leaves. I was dumbfounded. What had I been doing all these years?

As soon as I got back to my tent, I got onto Google and looked up exactly how many people had been bitten by snakes in Australia. It turns out that out of Australia’s population of twenty-three million people only one or two people die from snakebites per year.

Most bites are because people try to pick up the snake or kill it. If I wanted to get bitten I would have to chase the snake down and pick it up and hug it. I also found out that sharks only kill one or two people in Australia per year as well, and the average is only a little higher for crocodiles.

I lay back on my sleeping bag and comprehended what Google was saying. That all my life from a young age I’d been programmed to be fearful of something that was extremely unlikely to happen.

It dawned on me that my sense of alarm and my fastidious watchfulness was misplaced. It had taken years and years of reinforced programming to get me to a place that I couldn’t walk in the bush without being fearful.

What a silly state to be in. I remembered that a couple of years ago I’d hiked through New Zealand and one of the truly delightful days was walking through grass as high as my waist without fear. There are no snakes in New Zealand. I’ve never forgotten the ecstasy of it.

Reminding Ourselves About the Nature of Fear

My realization about snakes also highlighted to me how heavily programmed fear can make us completely lose our perspective. We don’t even question whether what we fear has any basis at all. We don’t test it. We don’t think about it other than to react.

Albert Einstein said that we must not stop questioning, and this applies when we feel fear. We should question it, investigate the nature of it, and test our preprogramed and sometimes deeply subconscious hypothesis about the ways we should live our lives.

Sometimes the result of our investigation will be that our fears are founded. For example, we probably should be fearful of walking across a canyon on a tightrope. But what if there’s no rational explanation?

What if there’s a brilliant world out there that we are not experiencing to the fullest in this very short time on earth?

We have some tough genetic programming to overcome. Our brains are used to looking for threats in the environment. In the past it was a tiger, now it’s whatever we deem threatening.

I was recently doing some research on fish and found a study examining whether fish experience pain. It turns out that even fish avoid objects that have previously caused them pain.

Our natural animal instinct is to avoid what has hurt us before or, similarly, what we perceive could hurt us in the future. Our alarm mechanisms are inbuilt.

We also live in a complex world full of stimulation, and it’s hard for our brains to keep up with what is a true threat such as a car heading straight for us and what’s not. There’s just so much for our minds to deal with.

The good news is that we are equipped with tools such as logic, information, and awareness to help us overcome our fears.

I’m finding the more I confront my fears and do the opposite of what they are warning against, the more my consciousness understands that these things are a programmed mirage.

I know we’ve all heard this wisdom, we all inherently know that most fears have no basis in reality, but my little snake adventure reminded me that I don’t often apply this knowledge to my everyday life. So this time I decided that it was about time that I did.

So how does a woman who has treaded heavily all her life for fear of sticks learn to live again? I’ll tell you how I learned. Later that night I had to go to the bathroom and I ventured outside my tent, turned off the torch, and walked—not stomped, walked.

I drank in the vision of the moonlight touching the gum trees, the lake, the rough dry land and it was glorious. That’s how.

Face everything and rise image via Shutterstock