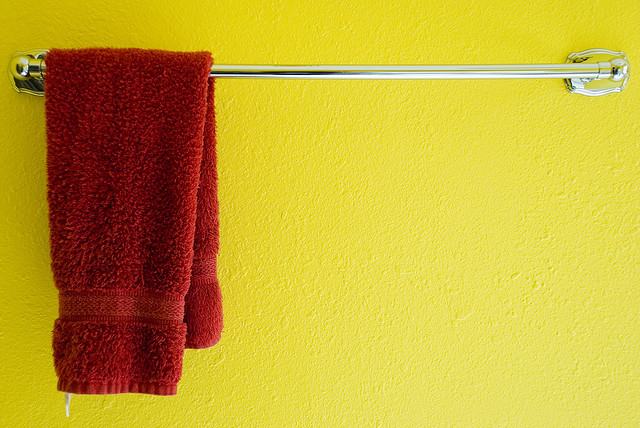 “Life’s challenges are not supposed to paralyze you; they’re supposed to help you discover who you are.” ~ Bernice Johnson Reagon

Have you ever hung up a towel and not straightened it or folded it or arranged it in some way as you did so? Have you ever just casually tossed a towel over the towel rail?

I did that last weekend and it was a big event. I had to laugh at myself for having this obsessive quirk, but doing that was almost impossible. I was in a hurry putting away the laundry, and there were those two clean towels to be hung back in the bathroom.

I thought about just stuffing them over the towel railings—but I just couldn’t! However, when I realized how hard it was to do this, I made myself do it.

I wonder if you are the same as I am about hanging towels “correctly” every time?

When I asked my sister that question, her reply was, “Gasp! Wash out your mouth with soap!” And then she asked, “How long before you went back and straightened it?”

The towel stayed in its tossed position until I used it after my shower that night. After I got away from it after tossing it on the rail, it didn’t bother me. I soon forgot about it—the towel itself wasn’t calling me back in there to fix it.

I went to the bathroom later and managed to leave the towel as it was and just walked away again. It was a good exercise in self discipline.

I’ve learned that I can make untidiness affect me less by doing my ignoring practice, just like during the towel incident.

My partner thinks it’s hilariously obsessive to have to hang towels straight and tidy each and every time. Some people think habits like this (in others) are annoying. I wonder if it’s just as obsessive in another way to be annoyed by somebody who needs to tidy?

My partner hangs his towels nicely most of the time, although not the way I would. I have made myself get used to leaving his towel the way he last hung it—I don’t even notice it any more.

It doesn’t matter to him that I need to have certain things a certain way. He just thinks of this as one of the many
rules. He knows he can happily live with my rules as long as he gets his way about his own rules. (He doesn’t admit he has rules, but I think he knows he does.)

On his boat, everything has to be done properly every time, not just the towels. He says that’s about living comfortably in a small space. At least he knows what it feels like to need that level of tidiness.

Some people, like my partner, are just not able to see untidiness, not ever. How can that be?

When I told my sister that I was training myself out of tidiness habits, she asked, “Isn’t it less trouble, and less energy, to just go ahead and be obsessed?”

Very good question! Self acceptance, even about our own annoying habits and quirks, isn’t that something to work towards? Is that a better place to be than always having the need to “fix” things that bug us?

I remember exactly when I started my personal training and why. It was back when I lived with my ex, very early in our marriage. That day we had a huge fight just before visitors were to arrive. He had left some personal stuff lying around, like socks, I can’t remember exactly.

Before having visitors over, I always had to tidy everything, even the socks in the bedroom, where the visitors would likely never go. Of course, he somehow couldn’t even see what needed tidying, so he was never much help with that.

He said it didn’t matter to people what the place looked like—they just wanted to visit us, not our tidiness. I said it mattered to me because an untidy house said something about me.

Is that true? Do our habits serve to describe us? I began to doubt myself on that point. If that was true, why didn’t he care as much as I did that our home looked untidy?

After that, I began to try not caring whether the person I lived with did things differently from me. I began to try to “just live with it.” But I didn’t have a real plan to accomplish this.

Years later, when I moved in with my current partner, I knew that I wanted a fresh start. I wanted no more obsessively-tidy battles. I began my personal training to eliminate my tidiness obsession. I started with work on lowering my tidy-standards, much like the ignore-the-towel game above.

Although I draw the line at actual uncleanliness, I can now live with dust bunnies, with untidy bathroom counters, with sloppily hung towels. (I confess that it’s still much easier to tidy a crooked picture than to ignore it. Well, ok, I confess that I cannot ignore a crooked frame.)

I’ve noticed that obsessively tidying creates a kind of stress. I feel like it’s been good for me to learn to relax some of my standards and rules because each time I do, it reduces one more little bit of stress.

I have learned to recognize that some things, such as a messily-hung towel, can be left as is. I now realize that if it were just the one thing, fixing it would be fine, but during a day there can be many just-the-one-things that add up to a cumulative dose of low-level stress.

Ignoring some of the untidy things also eliminates unnecessary work. Yes, I can now see it as unnecessary! I now recognize that constant tidying adds up to an overall greater workload.

I know I’m happier when things are tidy, and I accept this in myself and do what it takes to accomplish this for myself. It’s no longer about what others will think of me.

This self-training is also very good for my relationships. I’m not talking about how others view me, but about my learning to accept untidiness in others. I still have a long way to go, but I’m working on it.

Accepting it means not bugging them about their habits and not running around tidying up after them. It requires that I’m able to live happily with less-than-tidy. Eventually, perhaps I’ll be able to completely ignore untidiness, not even see it! (My doubting soul had trouble writing that last part. :))

So what it comes down to, for me at least, is striking a balance between self-acceptance (I’m perfectly OK when I tidy something that’s not quite right) and living happily with other people (it’s OK if that person doesn’t tidy something and if I don’t do it for them).

If you’re anything like me, I propose a challenge for you today: Go toss a towel and leave it the way it lands. Can you do it? Can you leave it alone? Then explore how you feel and react for the rest of the day. It’s quite a discovery!