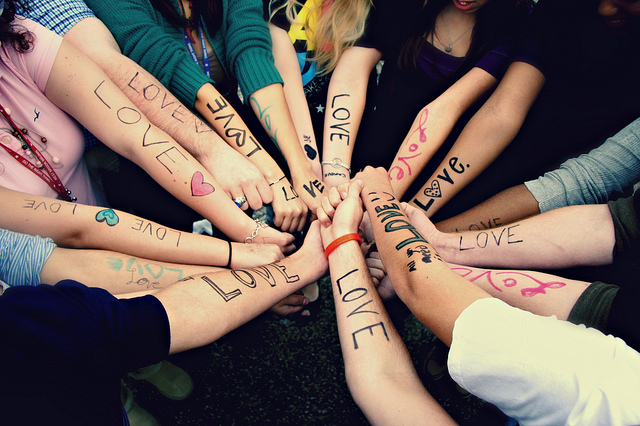 “We accept the love we think we deserve.” ~Stephen Chbosky

There are those moments in life when things suddenly shift from a deep, sad shade of blue to a lighter shade of sky, and then eventually the beautiful reds and pinks and oranges of a sunrise.

When a light bulb snaps on in your head and you see something that you’ve been missing for days, months, maybe even years, though it doesn’t change what caused the sea of blue, it makes it look more like a calm lake than a raging ocean.

I had one of those moments not too long ago. I had been stuck in a sea of blue for almost two years. After the breakdown my first “real” relationship I vaulted into a deep dark ocean where I could only tread water, and I stayed there for what felt like an eternity.

I didn’t want to go out, happiness seemed like a fleeting feeling that left me as quickly as it took me over, and I felt like I would never feel better. I had fallen into a depression that would come and go, and a false sense of healing.

But what I failed to realize is that I hadn’t addressed the real problem yet. And then, after treading water for a long time, I met someone else, and he was like someone I had never been with before.

He was gentle and really cared for me, and I honestly didn’t know what to do with him.

I didn’t know how to handle someone who didn’t want to use me. I was completely confused and unsure.

One night, after a particularly tense time with my current love interest, I broke down, and I couldn’t understand why I resisted a real relationship so fiercely.

I just kept asking myself: What’s wrong with me? Why can’t I be whole again? Why do I feel so empty and unloved?

I stayed that way until a friend of mine asked, “Do you think you deserve something so good?”

This was something I had never asked myself. I was so caught up in what I was feeling that I never had the courage to truly look inside and see why this was so hard for me.

It was because I was afraid. All I had known was the deep dark blue of abuse, and I had fostered the false belief that I didn’t deserve anything better.

For years, I found myself and put myself in situations with people who didn’t mind using me. I was used and hurt and thrown away, like an old Kleenex, and after a while that’s who I thought I was. A washed up, old person, stuck in the body of a young girl, spinning wildly in the same circles over and over again.

I had kept that feeling as an integral part of who I was, and how I related to people. I had created my whole self-image around the belief that I didn’t deserve love.

And because of this I had attracted people who didn’t want to love me, and I seemed to repel people who truly cared about me.

I realized that in order to reverse this flow of people and energy I had to redefine how I see myself.

Pop! The light bulb snapped on in my head, the waves of emotion started to calm down, and my sun started to rise.

I could understand why I felt like this, and though I can’t undo years of this type of thinking right away, at least I am able to see it for what it really is.

I have a long journey of recreating myself ahead of me. That is something that I probably should have done a long time ago, but I needed to tread water for a while to truly understand. And that’s perfectly okay.

I know how easy it is to unconsciously repeat patterns, and how scary it is to break them.

I know that I am not out of the water yet, and the sunshine hasn’t completely bathed me in its enlightened glow. I know that it may take years to understand why I do the things I do in relationships.

But I will try to take baby steps because no one should feel like they don’t deserve someone who can love them for exactly who they are.

Because everyone deserves to love, even if that means they have to tread water for a while first.

Elora Nelson is a student and a uniquely candid writer, poet, and pen pal. Her experiences in a diverse set of circumstances influence her to write what she can't say. Her words demonstrate a distinctive tone and view of the world that is conscious of life as an ever-changing journey.