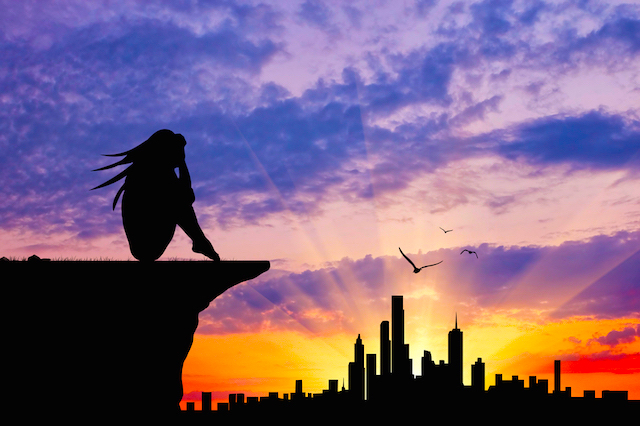 There was no denying it. I had reached a dead-end. A year and a half spent living in a southern town that was simply too small for me; it was time to go. I needed a city, preferably a large one filled with numerous opportunities for a budding young writer.

Ironically, the very day it dawned on me that it was time to move to a metropolitan area, love summoned me. It shouted to me from thousands of miles away, beckoning me to change the course of my travels.

My long distance/Californian boyfriend, the one I designated the great love of my life, declared that he wanted to move in with me—to the very place I had deemed to be a dead-end. He was sick of his hometown. He wanted to come to mine so we could finally be together.

I knew I couldn’t have my cake and eat it too. I had to make a choice. A city would wait for me; I wasn’t so sure love would.

It took only two months of us living together in Deadendsville for him to suggest that we move. I was hoping he would maybe say Chicago or Boston or New York. Instead, he shocked me by saying he wanted to return to his suburban hometown in Northern California.

I knew he wouldn’t go with me to a big city. He had made up his mind. He wanted me to follow him so he could teach me to surf, so we could camp at Big Sur, so we could have our tanned bodies tangled together every night.

A more sensible person might have ignored such a romantic request, favoring sanity and security over things like sunshine, pheromones, and fun. But I, in my reckless abandonment of all that could potentially shield me from making a poor decision, refused to be sensible. I wanted (more than anything) to be true to my wild heart, which in that moment meant chasing after him.

Like magic, the dead end disappeared and I found myself hurtling at 80 mph across the country toward California. I had no plan. No job lined up. No friends. Heck, I had never even been to the state of California, but there I was, road tripping on some lonely desert highway, pledging my allegiance to the west.

At twenty-eight years old, I knew what was expected of me. I was supposed to be at the very least veering toward adulthood, making responsible decisions, preparing for my future.

All of my peers were getting engaged, making down payments on houses, building their careers. Meanwhile, I was on a mad adventure, whizzing past cacti and mountains, feasting on chips and guacamole, in awe of my own defiant behavior.

Sadly, my fiery romance burned out faster than a campfire in a hurricane, which ultimately spelled out all kinds of trouble for me. I had blown through my savings. I had no vehicle for transportation. No clue where the hell I was going. I also had a hole in my heart the size of Texas. I was beyond lost.

Worst of all, shame swarmed all around me. Loved ones reminding me it was my fault for having such a flimsy plan. My own inner voice reminding me that I should have known better.

I felt too old to be this naive, this bad at protecting myself. I could barely get out of bed, and yet I still had the energy to shame myself over and over again for the foolish choice I had made.

Thankfully, my great aunt (whom I barely knew) invited me to stay on her ranch while I licked my wounds in Southern California.

She too had moved to California in her youth for a love that did not last very long. Apparently, many broken-hearted women in my lineage had sought out comfort in her abode. It’s practically a rite of passage.

Never once did my aunt say anything about my poor planning or taste in men. All she said was, “So what if you didn’t have a plan and you ran off with some jerk? You had an adventure. You come from a line of very strong women. You will get through this.”

There it was. Lo and behold, the tiniest taste of the healing elixir my soul was so desperately thirsting for. I vowed to get well again, to build up my strength, to never again let shame bully me into forsaking my heart.

On the long and winding road to recovering my sense of self-worth, this is what I learned…

Sometimes, we do stupid stuff. We leap before we look. We make unsafe bets. We throw caution to the wind. We let lust lead the way.

It is almost guaranteed that when we take those daring leaps, we become students of humility. We learn why skydivers carry parachutes and trapeze artists have safety nets. We come to understand why for better or worse it is smart to set up certain variables that will help cushion our fall.

And yet, in this great hour of learning, if we forget about the love or the excitement that led us to leap from such great heights, we run the risk of inviting shame into our experience.

When we do that, we make ourselves vulnerable to all sorts of nasty pathogens that seek to attack our inspiration, our courage, our joy.

In case you weren’t aware of it, shame is one of fear’s favorite minions. Fear is very impressed by shame’s innate ability to make even the most gifted human being feel like they have nothing to offer.

Fear and shame have been working together since ancient times, and sadly it does not look like they are going to break contract anytime soon. Together, they create much of the propaganda that has folks like you and me believing that we are the world’s shining examples of failure.

The minute we allow shame to start broadcasting in our brains, there is no telling what other forces will join fear’s army of oppression. Regret. Guilt. Hatred. Disgust. All of them are sadistic opportunists who have no other way of gaining power than feeding off of yours. Still, it is tempting, isn’t it, to invite these ambassadors of fear to keep us company when we are feeling down and out?

You must trust that there is nothing pleasant about having your heart raked over the coals. Nor is there anything so wondrous about sitting with your head hung low sputtering out the words “I’m sorry” or “I shouldn’t have” over and over again. It is actually quite dull. Shame, of course, will try to glamorize the whole act of penance.

Try not to be dismayed by the fact that your thrilling moment of flight was followed by an equally epic fall. So what if the drastic descent blew your self-esteem to bits or fractured the very bones of your dearest relationship? It is not personal. It is not your fault. It is just gravity.

Give the situation some time to heal. If you get lonely, call upon humor, but leave shame out of the picture. I can assure you, shame has no desire to see you put yourself back together.

And what about that choir of onlookers that keeps singing the same four words over and over again: We told you so? Tell them it was one hell of a ride. Tell them you would do it all again—broken bones and all.

Whatever mistake you think you made, whatever wrong turn you might have taken, if it was prompted by the desire to expand your capacity to live fully or love and be loved, then you have absolutely nothing to be ashamed of. You need not repent for a thing. So quit condemning your heart. It is likely that it has suffered enough.

Here is the secret that lovers and fools and risk takers and geniuses have been whispering into one another’s ears for centuries: Never listen to the sober ones who refuse to drink from the cup that is inspiration.

But you, who has gulped your way through life, unafraid to pair the sweet with the sour, you know why you answered the call, though it left you a bit bruised and battered. You know why you chose to move in a direction that was both surprising and intended.

Hold onto that knowing. Protect it at all costs. Defend it with your sole existence. It is the medicine you must take to remember that embracing a path full of possibility and adventure is nothing to be ashamed of.

Michelle Price is a creative content writer who is most at home among fierce doers and dreamers. A lover of the overlooked, she delights in her role as an observer. Her eyes, being as wide and blue as the ocean is deep, yearn to gaze upon that which is teeming with life. She can be reached at restlessasweare@gmail.com.

Overcoming Shame at Work When You’ve Made Big Mistakes