The Power of Surrendering: Let Go of Control to Be Peaceful and Free
By Mary Thompson 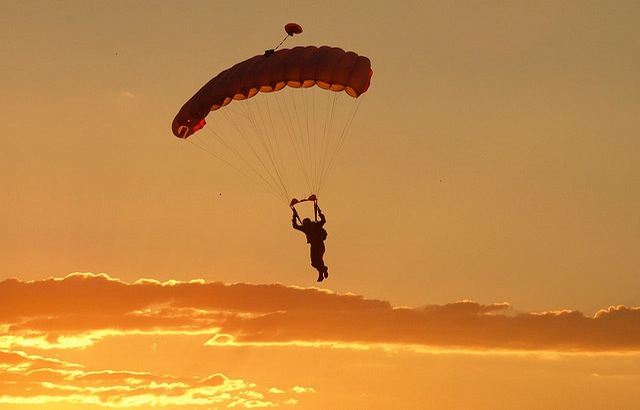 I have never known how to surrender to just about anything. Surrendering is giving up control, and this is something I have never been good at doing.

From an early age I coped with tension and negativity by trying to will things to be different. This caused me a great deal of anxiety because trying to will anything to go your way is not only exhausting, but also impossible.

My efforts always wound up seeming fruitless, and I often felt that many things were out of my control, starting with my home life.

I am the second of five children, so money was always tight. My mom worked two jobs as a nurse, and my dad had his own struggles. The financial strain at home was bad, but the emotional one was much worse.

I wanted so badly for my parents to get along, and yet it seemed to always be out of my control. No matter how much effort I put into not creating waves, nothing helped. I never learned to relax. I felt like if I was constantly on some sort of emotional alert, somehow the blows wouldn’t hurt so much.

That was never the case. Soon it seemed I was anxious even in peaceful moments because I always expected those quiet and happy times to be the calm before the storm.

School did nothing to help my anxiety. I had a close knit group of friends beginning in junior high, most of whom I am still very close to now; however, I never truly felt comfortable in my own skin as an adolescent.

I was a beanpole growing up, but then suddenly my body changed in my early teens, and not in a way that I liked. I noticed how much wider my hips were than my friends’, and how I had to wear a size fourteen when everyone else was wearing a size four.

During this time I made a promise to myself that I would grow up to be much different. One day my life would be mine, and I would be able to control it to be just how I wanted. I would finally surrender to the palpable joy of my wonderful life.

This mindset did nothing to cultivate a healthy young adulthood, though. Instead, it led to bad relationships (the “I can change him” mentality) and an eating disorder (I thought I could control my body, if nothing else).

Time did heal some old wounds, and eventually I stepped away from the bad body image and found myself in a happy, healthy marriage. Yet I found that my anxiety had stuck around. I really thought that once I had a wonderful husband and a great job, all of my worries would be over, that suddenly the anxiety I had growing up would cease to exist.

Why wouldn’t it? Clearly I would have nothing to worry about—except I still find so many things to worry about: My parents getting older, my own finances, my dogs’ health, and even my marriage.

It doesn’t help that I’m a fixer. You have a problem? Give me a few minutes and I can solve it. Can’t find a job? I am your woman. Need psychological help? I will forward you my counselor’s information.

The trouble is, most of the time this is unsolicited, and I find myself trying to fix issues I have absolutely no business fixing. These aren’t my problems and, quite frankly, it is exhausting trying to fix other people’s lives while also finding time for my own issues.

I have a hard time understanding that not involving myself doesn’t mean I don’t care. It means I care enough to believe someone else can solve their problems without me.

I have never enjoyed trying to control things. I truly want nothing more in life than to just let go, let things happen for what they are. I have just never been able to loosen my grasp.

The closest I ever came to surrendering myself, mentally and physically, was when I went skydiving. I put my trust and faith (and life) in both the pilot and tandem jumper. I remember the guy I jumped with giving me instructions as we ascended into the sky.

The instruction I remember the most was that under no circumstance should I try and grab onto any part of the plane on my jump out, especially the wing. If I did, not only would I risk getting hurt, but also would risk the lives of everyone in the plane, including my eventual husband.

For a split second I panicked: “What if my inner control freak rears its ugly head and tries to grab ahold of something during the jump?”

And so I jumped. I went free falling out of a plane from 10,000 feet in the air, probably plummeting at about 100 miles per hour.

There I was, falling from the sky without the ability of manipulating anything in my favor. For once, I had absolutely no control of an outcome. I had to accept that, put my faith in someone else for a brief moment, and just let the chips fall where they may.

It took jumping out of a plane for me to get it, but at that moment I finally felt how freeing it is to let go and surrender control.

I used to hate people telling me things would be okay. At my lowest and saddest points it seemed like things wouldn’t be okay because I was unable to control any outcome.

I once had a boyfriend who told me this, even as I sobbed on his porch about how horrible my life was. I asked him how he knew that things would be okay. He didn’t have an answer. I was angry that he would tell me things would turn out all right when he could make no guarantee that they would.

Looking back on that day, I realize now how unrealistic it is to expect any guarantee you that your future turns out all right. Life makes no promises and is not obligated to guarantee anything. The way things are doesn’t always follow what we want.

I have spent many of my happiest days clouded by anxiety because I’ve been simultaneously waiting for the other shoe to drop. I need to re-learn the simplest things, like how to just enjoy a moment for what it is without worrying about some impending doom.

I once sang The Beatles’ “Let it Be” to audition for a high school play. I read that Paul McCartney wrote it after having a dream in which his late mother came to him during a difficult time in his life. She told him to let things be and that they would all turn out okay in the end.

A simple song has helped me scratch the surface and realize profound beauty in just letting things be what they are.

It’s only in surrendering that we can be peaceful and free.

Mary Thompson lives in the Washington, DC metropolitan area with her husband, their two dogs and a chinchilla. She has her BA in Anthropology from George Mason University in Fairfax, Virginia.

Letting Go, Trusting, and Allowing Yourself to Be Happy and Free

Why Surrendering to Life is the Key to Positive Change